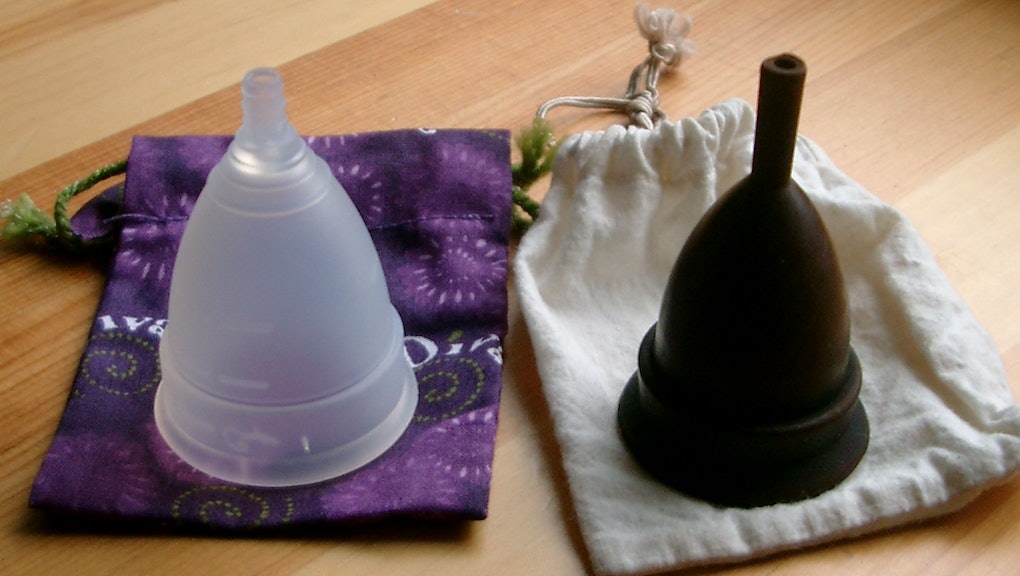 If you've ever used a menstrual cup, you know they can be an awesome, environmentally friendly alternative to pads and tampons. But you probably also know that taking them out can be a bloody mess.

Recently, Reddit user Mamishi learned this firsthand when she realized she had a menstrual cup stuck in her vagina, an experience she recounted in gruesome detail on an r/TwoXChromosomes thread. (The following account is extremely NSFW, obviously.)

"I was trying my hardest to reach INTO myself and fish this cup out, splattering blood with every twist," Mamishi wrote.

After more than an hour of frantic Googling and "birthing" techniques, she called her boyfriend for backup.

"I braced myself against his shoulders and spread myself as wide as I could manually. He had two fingers in me, barely grasping at the slippery silicone. I started baring down, pushing, using my last amounts of energy to conceive this awful contraption from me." They finally got it out, although they both ended up covered in blood in the process.

Getting a tampon or cup stuck inside the body happens far more often than happy-go-lucky, lady-frolicking-in-the-fields commercials for feminine hygiene products might suggest. Mamishi's story inspired hundreds of Reddit users of both genders to discuss how they too have enlisted the help of a partner in the hunt to retrieve a lost menstrual product.

"I had something similar happen with my tampon (because I lost my menstrual cup. Yeah, idk how.) this past week," wrote Reddit user zombehbrainz. "My SO was willing to help me search and was knuckle deep in the most nonsexual way possible. I will also never be on the same level of intimacy with another man because of this."

Somewhat surprisingly, Mamishi's story also spawned a conversation among male Reddit users about period stigma. "Some guys I know literally will not have physical contact with their wives during the wives' menstrual cycle," wrote user Dan_Franklin. "I mean, goodness. We're all just fleshy blood bags anyway, and we all leak from time to time. That it comes out of her gooly bits at relatively consistent intervals shouldn't make it any more a taboo subject than shaving accidents."

The weirdness of the phrase "gooly bits" aside, here's to Dan_Franklin, Mamishi's boyfriend and the other brave men and women who've assisted their partners in the hunt for a wayward menstrual product. May you always be willing to lend a hand (or at least a few fingers) for a vagina in peril.