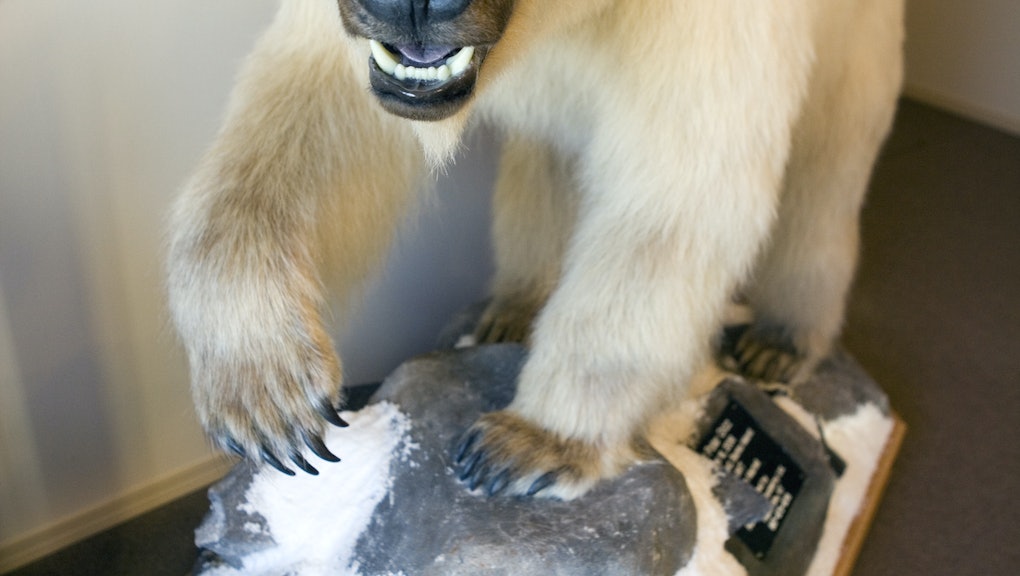 Last week, a hunter in the town of Churchill in Manitoba, Canada, named Didji Ishalook, shot an extremely rare grizzly-polar bear hybrid, according to CBC News. Other than its big brown paws, it has the white fur of a polar bear, only smaller sized. Its head also more closely resembles a grizzly.

Unofficially, it's called a grolar bear or pizzly bear, depending on which the sire is.

This interbreeding is most likely a result of climate change, which is pushing the two bear populations to now overlap in the pursuit of caribou, researcher Dave Garshelis told CBC News. The two species have similar genetics, probably diverging less than 2 million years ago, according to National Geographic.

Both grizzlies and polar bears have an extensive reproducing process, which requires mating multiple times and spending time together before that.

Grolar bears are also reportedly extra aggressive, according to the Toronto Star.

Garshelis knew the bear wasn't albino because its eyes, nose and claws are dark, he told CBC News.

Ishalook thought the bear was a little polar bear or Arctic fox. In some parts of Canada, polar bear hunting, which is traditional Inuit activity, is legal and monitored closely.

Climate change is also making other bear species, such as American black bears, to travel northward.

But in the last decade in northern Canada, only three sightings of these grolar bears have ever been reported — one in 2010 and the other in 2006, according to CBC News in 2012. These hybridizations will most likely never really become a thing because of how difficult it would be to normalize themselves in a habitat thanks to us humans, a 2015 study found.