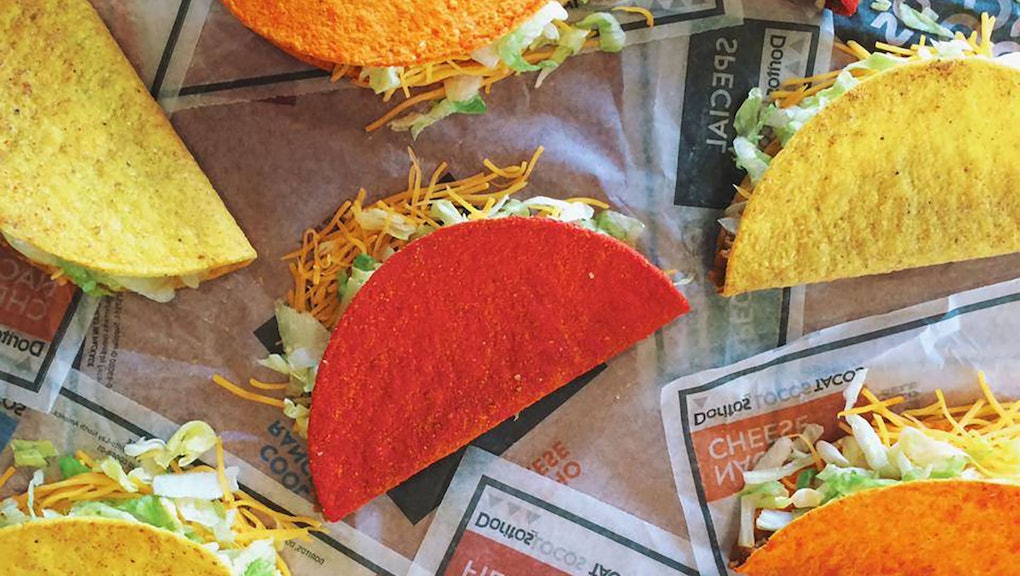 I grew up in a very vegetarian household. Not only did we abstain from eating or buying meat, but my friends were forbidden from bringing a ham sandwich into the house — even if it was triple wrapped and at the bottom of their book bag.

According to my mom, said sandwich had to remain in the garage. If we went to Subway for lunch, Mom would make the employees swap out their gloves for a fresh pair to ensure that it hadn't previously been contaminated with salami or turkey. Her strictness wasn't unfounded, — my family is Jain, and a major tenant of the religion is vegetarianism — but it made eating out as a family pretty difficult.

Fast food joints like McDonald's and KFC were out of the question, unless we wanted to cobble together a meal from sides. But the one saving grace in all of the fast food world was Taco Bell. It was the sole restaurant at which we weren't limited to some sad grilled cheese from the kids' menu, a limp salad or a pathetic excuse for a veggie burger.

In fact, we could order practically everything on the menu; my very vegetarian mom even subsisted on Taco Bell tostadas while pregnant with me. (Maybe that explains why I don't love them.)

How to transform virtually any dish at Taco Bell into something vegetarian:

My family didn't have to alter our vegetarian way of eating for Taco Bell. It was kind of the other way around: Taco Bell's menu has always been especially malleable for particular diets. While the chain is known for things like beefy tacos, chicken chalupas and steak-filled quesadillas, there's a really simple trick to transform almost any meaty dish on the menu into a vegetarian one — you can swap any meat for beans free of charge.

"Beans instead of beef" has become a family motto of sorts, and it will probably be my campaign slogan should I ever decide to run for president. According to Missy Nelson — a registered dietitian and Taco Bell menu developer who spoke with us over the phone — there is only one item at Taco Bell that can't get the meatless treatment: The Naked Crispy Chicken Chalupa. The item has a shell made out of fried chicken. (It'd probably be pretty messy to make a shell out of beans.)

While Taco Bell has offered the beans-for-meat swap for many years, the chain only recently made an effort to place a spotlight on their plentiful vegetarian offerings. Last year, the company partnered with the American Vegetarian Association to create a certified vegetarian menu, making them the first quick-service restaurant to do so. "The menu has 13 items," Nelson said. "But we have a total of 38 ingredients that are either vegetarian or vegan, and of that 28 are certified vegan."

Taco Bell worked to get vegan certified in 2015 to ensure "people felt confident" that they were getting truly vegetarian options, Nelson said. The switch is incredibly helpful, particularly for times when foods appear vegetarian but actually are not: During the certification process, the chain reformulated its sour cream recipe to be gelatin-free, so vegetarians could comfortably enjoy the must-have taco condiment.

Hopefully Taco Bell's power move will inspire other chain restaurants to get on board with the certification process. Not only does it make it easier for customers to figure out what to order, it could also prevent major lawsuits and save the company some dough. In 2002, two strict vegetarians sued McDonald's after learning that the chain flavors its fries with a small amount of "beef essence." (McDonald's settled the case for $10 million).

Maybe, sometimes, it really is smart to think outside the bun.