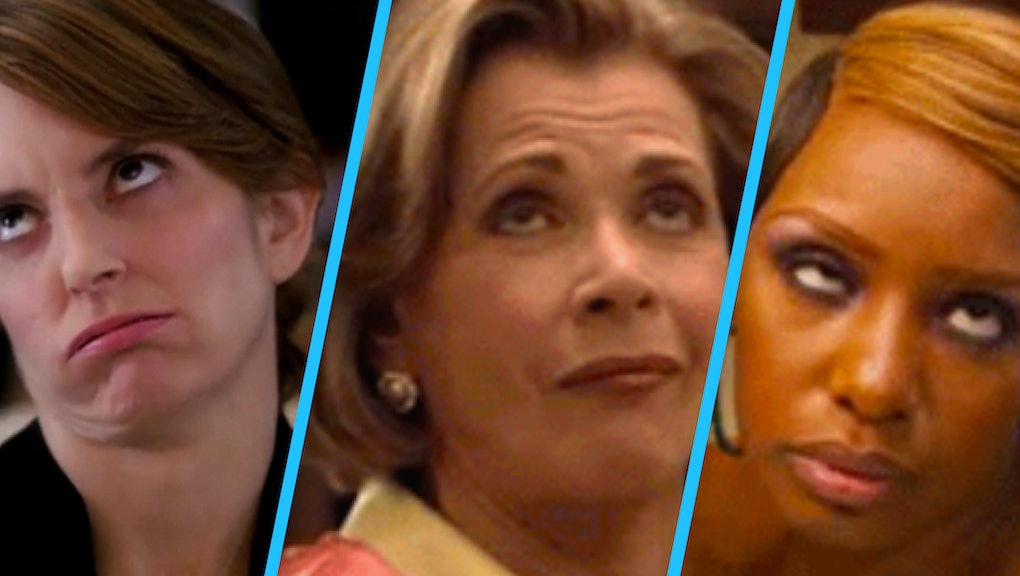 Eye-Rolling: The Secret Language of Women

When Donald Trump gave a victory speech knocking Hillary Clinton for supposedly playing the "woman's card," New Jersey's first lady Mary Pat Christie did the most relatable thing ever: She rolled her eyes. On camera.

New York Times writer Nick Corasaniti distilled the moment in this Vine, which has been looped more than 4 million times.

There's been no shortage of viral moments from the 2016 presidential primaries, be it Jeb Bush pleading with a crowd to "please clap" or Ted Cruz accidentally elbowing his wife in the face. The internet latches onto these gems because they're public reveals of vulnerability and humanity. But amid the constant stream of viral content, women especially may think fondly of Christie's eye roll because most of them probably don't just "get it" — they've lived it.

"It went viral exactly because it's supposed to be a secret," said Lisa Wade, an associate professor of sociology at Occidental College, during a May phone interview. "Eye-rolling is supposed to stay to yourself or be between you and your conspirator. It's not supposed to be a public objection."

Wade refers to eye-rolling as a "weapon of the weak," a term coined by anthropologist James C. Scott in his eponymous book on forms of peasant resistance. Wade explained she doesn't mean to use the phrase to portray women as victims. Rather, "weapons of the weak" describes the covert tactics women and other marginalized groups use as an unspoken "fuck you" to their oppressors.

In a 2013 article for the Society Pages called "Gender and the Body Language of Power," Wade explored the ways women use their bodies to interact with the world.

"Consider: A feminine person keeps her body small and contained; she makes sure that it doesn't take up too much space or impose itself," Wade wrote. "She walks and sits in tightly packaged ways. She doesn't cover the breadth of the sidewalk or expand herself beyond the chair she occupies."

Men, of course, manspread. But how does eye-rolling fit into this schema?

Wade explained that when men find themselves in a confrontation, they're usually rewarded for speaking up for themselves. Women, not so much.

"Even if he's a subordinate, if a man fights back against some sort of insult that comes his way, it's often seen as standing for himself and not being a pushover," Wade said. "Even if it's defiance of a superior, it's seen as a positive thing."

If a woman did the same, Wade said, she might be seen as "bitchy" or overstepping her boundaries. In the case of, for example, overhearing a sexist joke at work, Wade added a female employee's "best case scenario" would be "to freeze and get busy and work hard, so that they have to recognize what she produces."

But first, she'll probably roll her eyes; even social scientists have said so.

"We found eye-rolling was not infrequent," LaFrance told the Atlantic. "Even though they were sitting there alone, when you see it, it really looks deliberate — whereas lots of other facial expressions are really automatic."

Psychologists, sociologists and diligent observers of teenage girls have floated a few theories about the evolutionary basis for eye-rolling. Slate editor Forrest Wickman recalled a 1989 book suggesting the eye roll is a signal of rejection — a looking away from what "we do not wish to see." A Broadly article reported women may have developed "lower-risk aggressive strategies" for the survival of themselves and their offspring, and eventually eye-rolling fell into that category.

Eye-rolling was also once for pure sport: Twentieth-century health and fitness guru Bernarr Macfadden endorsed the practice in his 1925 manual Strengthening the Eyes. He advised readers complete eye-rolling and side-eyeing exercises "not once a day, but a number of times each day."

Nearly a century later, though, eye-rolling is considered more a problem to be solved.

Studies have linked eye-rolling to divorce (which Wade said makes sense considering eye-rolling can communicate, "I'm on a different team," or be an avoidance of communication altogether), and writers have penned columns advising parents for how to deal with — er, "tame" — their eye-rolling teens.

While eye-rolling has a reputation of being a catty or gossipy gesture — a reputation mostly earned for it being deemed feminine — exchanging a glance, an eye-roll or a side-eye can be a comfort for women looking for some solidarity.

Wade agreed there is certainly value there.

"It can be crazy-making if you see things in the world that no one else seems to see," she said. "In that painful moment of hearing a sexist joke, which affirms your place in the hierarchy at the bottom, an eye-roll can be a way of releasing that tension. And if it can be shared with someone else, then that at least assures you you're not the only person who notices it."

And rest assured: Your eyes won't get stuck that way.