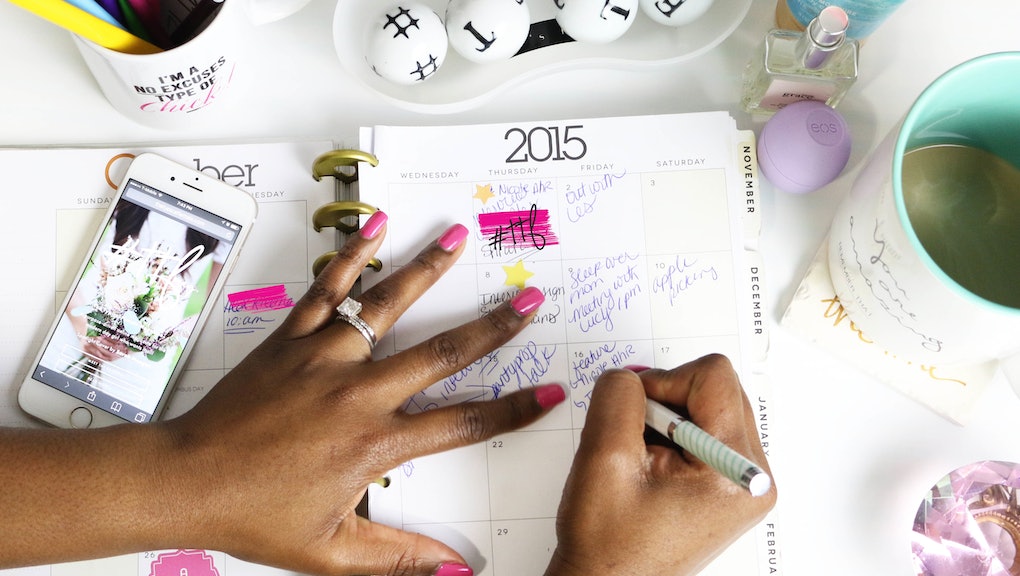 Your Busy Schedule Is Probably Good for Your Brain, According to Science

Your alarm goes off at 5:30 a.m. You go for a run, shower, get dressed, go to work, slog through 10 meetings, have drinks with a friend, hit the grocery store, go home, make dinner, check work emails and finally — at 11 p.m. — hit the hay. Tomorrow, you'll do it all again.

Millennials are no strangers to jam-packed schedules. For some, that constant activity — not to mention crippling FOMO — can be a major source of stress.

But here's the good news: Having a busy schedule may be good for your brain, according to NPR.

A study published in Frontiers in Aging Neuroscience found that older adults with busier schedules performed better in cognitive tests.

The study involved 330 participants between the ages of 50 and 89. Researchers had them complete two sets of tasks: a series of cognitive tests and a self-assessment of their own busyness. In the latter activity, participants were asked questions such as "How often do you have too many things to do each day to actually get them all done?" and "How often do you have so many things to do that you go to bed later than your regular bedtime?"

"How often do you have so many things to do that you go to bed later than your regular bedtime?"

Busier schedules, sharper minds: When the researchers analyzed the results, they found busier people had "better processing speed, working memory, episodic memory, reasoning and crystallized knowledge," according to their paper.

Keep in mind, the findings are correlative. People with better cognitive functioning may be more likely to overload their schedules. Likewise, adults experiencing declining cognitive function, such as those with dementia, may be less likely to make plans, according to NPR.

That being said, some kinds of busyness may be better than others, according to Nicole Amesbury, therapist and head of clinical development for the service Talkspace.

"When someone is busy in a high-stress situation, or busy repeating the same tasks over and over again, then that can actually carry physical and mental risk," Amesbury, who was not involved in the study, said in an email. "Repetitive strain injuries, anxiety, depression and an increased risk for cardiovascular disease are all associated with being busy in higher-stress situations where repetitive thinking and tasks are involved."

The secret is filling your schedule with fun, new activities, Amesbury said.

"Studies have shown that when someone learns new information — such as learning a foreign language, or even travel — it boosts episodic memory," she said. "Having more experiences in life equates to having more opportunities for new learning, and so it could be that this improves cognitive functioning."

What's more, it's a great excuse for planning that dream vacation. "It is also a great justification for staying busy at work and then taking an awesome summer holiday," Amesbury said.