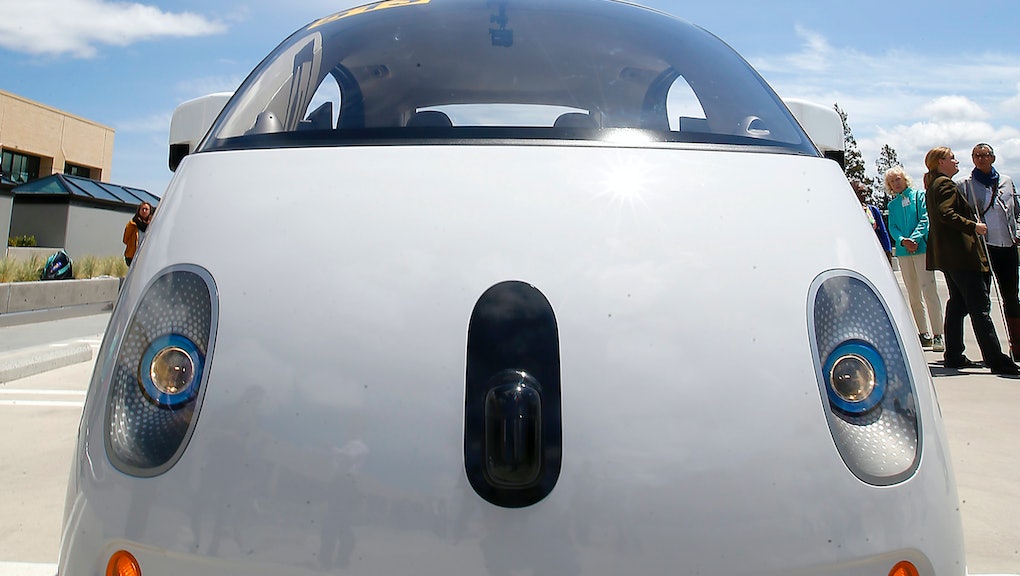 Google's self-driving cars may look a lot like a truck driver's windshield during lovebug season.

In a future where millions of driverless cars are projected to hit the open road, Google anticipates some car-to-pedestrian collisions. Its solution? Turning the hood of its driverless cars into human-catching glue traps.

Google received a patent on Tuesday for an "adhesive vehicle front end for mitigation of secondary pedestrian impact."

The patent describes the adhesive layer as a "system for protecting a colliding object" (that's you!) "from a secondary impact" (getting thrown to the ground) "after an initial impact with a vehicle" (Google's driverless car). You're stuck to the car that just hit you.

The adhesive layer would be on the front of the car with a coating on top that — when a human hits it — would break and expose the sticky layer beneath it. Then the person would be stuck to the windshield, staring into the eyes of the helpless passengers instead of falling to the ground. The patent says that, ideally, pedestrians would stick to the car "nearly instantaneously."

"This instantaneous action will constrain the movement of the pedestrian and carry the victim on the front end of the vehicle until the driver of the vehicle reacts to the incident and applies the brakes, bringing both vehicle and pedestrian to a safe stop," the patent says.

Driverless cars have a feature that lets passengers manually control it, so that in the event of an emergency they can override the autonomous mode and act accordingly.

Sans human flytrap, a vehicle-pedestrian collision will send the pedestrian "rolling, tumbling, and/or sliding" to the ground, according to MEA Forensic. Google's glutinous solution could eliminate this part of a collision to prevent further injury to the person. Because, hey, no driverless car is perfect! But they are less murdery than humans.