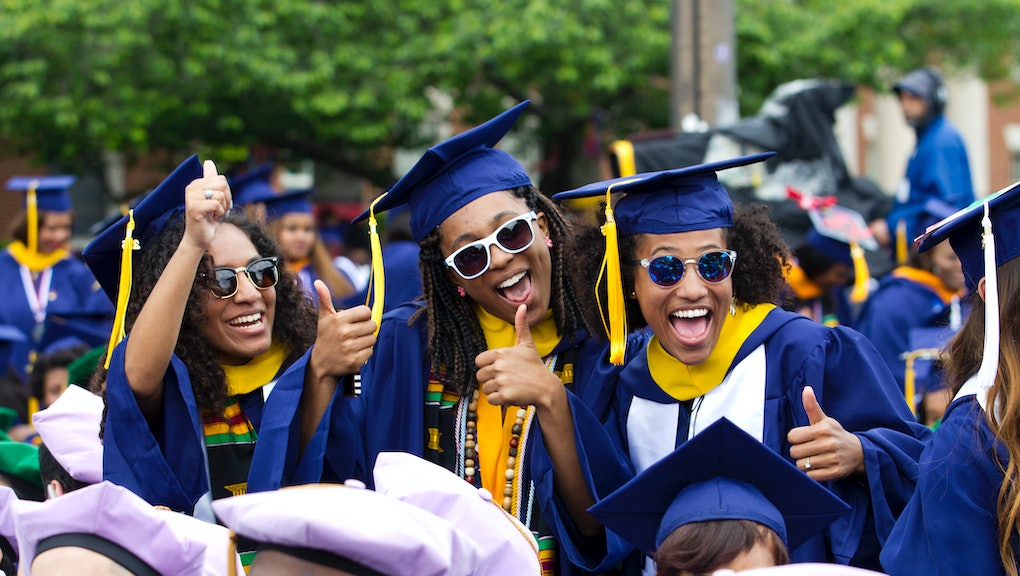 Surprise! This Year's Graduating Class Is the Most Indebted in History — Again

Congratulations, Class of 2016! You're poised to embark upon new adventures and leave your unique footprint on the world — starting with the fact that you'll have more student debt than any other class in American history.

Average debt at graduation for college students has been climbing for decades, and barring some kind of major reform to counteract the skyrocketing cost of college, the trend will continue. In the early 1990s, most students didn't have to borrow money to graduate from college, and those who did typically took out less than $10,000 in loans. But those days are no more.

This year, over 70% of the graduating class of 2016 took on an average of about $37,000 in student loans to finance their degree, according to an estimate from Mark Kantrowitz, publisher of the college and scholarship portal Cappex.com, who shared his findings with us via email. He made the estimate, which includes both federal and private student loans, based on data from the U.S. Department of Education's National Postsecondary Student Aid Study.

After adjusting for inflation, the amount of debt that students are graduating with has more than doubled within the lifetime of a 22-year-old member of the Class of 2016.

The share of students across the country who have to take on student debt has climbed steadily as well, increasing from around 46% in 1993 to nearly 72% today.

The total sum of student loan debt for the Class of 2016 comes out to around $60 billion — 12 times the amount that graduating classes from the early '90s held, according to Kantrowitz's figures.

The rising price of higher education is a complicated policy issue, but most of the meteoric rise in the cost of college — and the debt that's been generated to pay for it — can be traced back to the fact that states have disinvested in higher education for many years. With less public investment from the government, students and their families are expected to pay more and more out of their own pockets. (While sky-high tuition at expensive private schools tends to get the most media attention, a majority of college students attend public institutions, and their increased costs are at the heart of the student debt crisis.)

Why it matters: While the wage premium and career options that accompany a college degree ensure that it's still a wise investment for the overwhelming majority of Americans, the cost of paying off loans, which typically takes around two decades, exacts a toll on borrowers that's larger than the sum they pay back.

A 2013 report by the think tank Demos estimated that a household composed of two earners who borrowed an average amount of student loans for their college degrees today will lose out on more than $200,000 of wealth over a lifetime compared to a comparably earning household with no debt.

What accounts for the difference? The study found that substantial amounts of student debt tend to have a negative effect on income, by making borrowers more risk-averse and discouraging them from the kinds of career moves — whether moving to another city or taking gambles on new jobs — that tend to boost income over the long run. But the bigger reason is that student loan borrowers save less early on in their lives, and they tend to be more conservative with their investments in homeownership, due to constraints on income and credit.

Those are the negative effects that many borrowers experience assuming they can even pay off their loans. Currently, millions of Americans are defaulting on their loans, an act that can result in a ruined credit history, wage garnishment and even the loss of a professional license.

The student debt crisis is transforming the saving, spending and investment behavior of an entire generation, and it will eventually transform the economy along with it. All the evidence we have suggests that the change will not be a good one.

Unless lawmakers across the country take action to address the skyrocketing cost of college, we can expect future classes to make history for the same depressing reason over and over again.