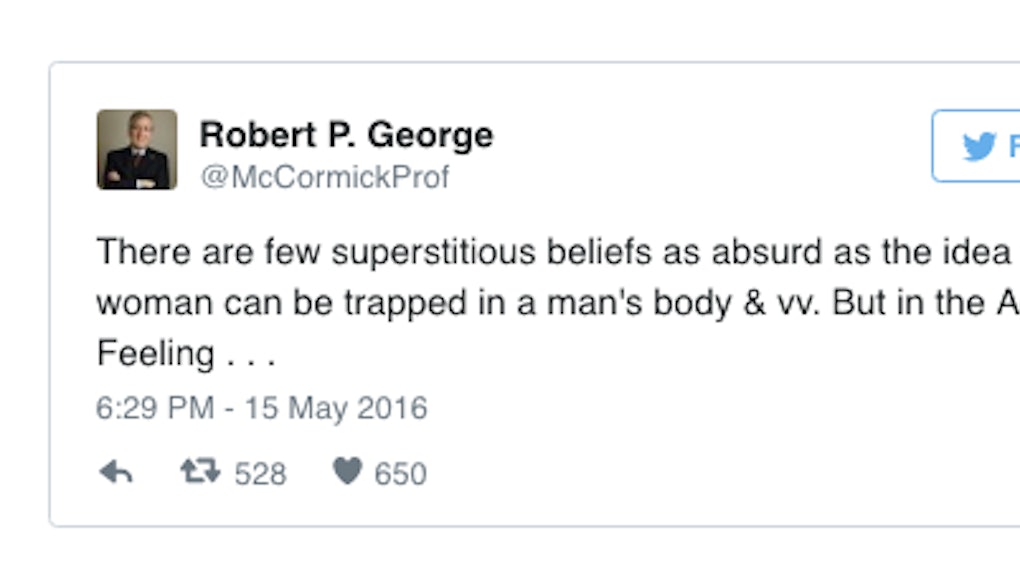 Princeton professor Robert George is one of the country's foremost Christian intellectuals. He's also no friend of LGBTQ rights.

George — who made a name for himself as a chairman of the National Organization for Marriage, which fought tooth and nail to stop the advance of marriage equality — said on Twitter Sunday that he thinks transgender identity is "absurd" and "superstitious."

Taking a page from an old playbook, he also suggested transgender rights are a danger to children:

It's important to note that George is neither an MD nor a psychologist — he teaches philosophy of law. And while Twitter isn't the best medium for explaining yourself at length, George's comment about the expression "born in the wrong body" seems uncharacteristically reductive for an intellectual.

(George did not respond to Mic's request for comment.)

"We are still a community struggling with a language to define ourselves."

When trans people and others say they feel they were born in the wrong body, they don't mean this literally — you're born in the body you're born in. Rather, it is a way of trying to communicate what it's like for someone to feel their body doesn't match their identity. As George's remark shows, some people have more empathy than others.

"We are still a community struggling with a language to define ourselves," Jamison Green, president of the World Professional Association for Transgender Health, said in a phone interview. "People who have no experience with any internal discrepancies have no sympathy for what we trans people actually go through."

Green traced the origins of the "born in the wrong body" expression to Karl-Heinrich Ulrichs in the late 1800s. Long before words like "homosexual," "gay," "lesbian" or "transgender" came into common parlance, Ulrichs, who campaigned for the decriminalization of homosexuality in Germany, sought to forge a taxonomy to describe the range of human sexuality and identity. He described himself with the Latin phrase "anima muliebris virili corpore inclusa" — a female mind trapped in a man's body.

In the early 20th century, the concept came to be used to describe what we would now refer to as transgender people.

But as Green pointed out, the idea that trans people were born in the "wrong" body is simplistic at best, and does not describe the experience of many trans people.

"Trans people with no language to explain themselves used the easiest, most understandable explanation they could come up with," Green said. "But most trans people don't feel that way — it's an awkward, oversimplified perspective on what trans people are actually experiencing."

George's tweet suggests touchy-feely PC culture has legitimized trans identity, which he believes to be a fantasy. But Dr. Alexandra Hall, a physician at the University of Wisconsin-Stout who lectures about transgender biology, said research has demonstrated that transgender identity has a basis in biology.

"There is a very strong biological basis for gender identity," Hall said. "There appears to be part of brain in hypothalamus that we think maybe is part of where gender identity is located in the brain physically."

Among the marquee research findings:

1. In several studies from the mid-1990s to 2008, researchers found that the hypothalamus of trans women and cisgender women shared characteristics, as did the brains of trans men and cisgender men. The study included both trans people who had taken hormones and those who had not.

2. Another study found that biological women with congenital adrenal hyperplasia — a condition that prevents the body from producing female hormones) were more likely to identify as transgender men.

3. Boys with cloacal exstrophy — a condition in which a newborn's abdominal organs are exposed — are more likely to identify as transgender.

4. Women treated with synthetic estrogen are also more likely to give birth to a transgender woman.

5. Twin studies, too, suggest a strong biological basis for transgender identity. One study found that in 20 percent of cases in which one twin is transgender, the other is as well -- regardless of whether the twins were raised in the same environment.

All this is to say: Trans people aren't just making it up.

The latest edition of the American Psychiatric Association's diagnostic manual — the DSM V — includes an entry for Gender Dysphoria. The association changed the entry from Gender Identity Disorder to indicate that transgender identity is not a disorder in itself. Instead, it is the feelings of distress that come from feeling one's body does not match their identity that call for treatment, whether it be psychological counseling or gender confirmation surgery.

"Gender dysphoria is a condition that can affect anyone — you don't have to be trans," he said.

Green gave the example of a woman whose breasts had been removed because of cancer. If the woman experiences gender-related distress stemming from the surgery — in other words, if it makes her feel less complete as a woman — she may be diagnosed with Gender Dysphoria and receive treatment.

What makes George's remark about transgender identity being "superstitious" ironic is that many would find the core Christian beliefs — the immaculate conception, the divinity of Jesus Christ and the resurrection— far more superstitious than trans identity. It was no less than Founding Father James Madison who said the fruits of Christianity have been "superstition, bigotry and persecution."

But that sort of blindness is what prejudice causes.