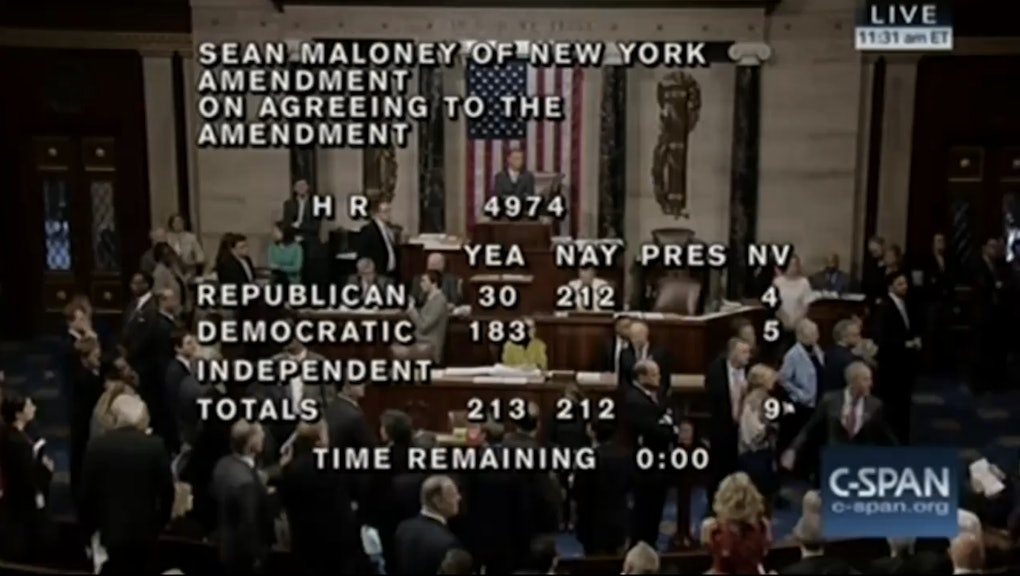 Madness erupted on the floor of the House of the Representatives Thursday after an amendment to an appropriations bill, which would have barred companies and institutions who discriminate against LGBT Americans from getting federal contract work, failed by one vote.

The amendment, sponsored by New York Rep. Sean Patrick Maloney had at first seemed on the verge of passing before House GOP leaders muscled a number of Republicans from mostly western states to switch their votes, Politico reported.

Read more: The House Just Voted to Prevent Syrian Refugees From Coming to the US

The dramatic final vote of 213 to 212 was met with jeers by Democrats, many of whom shouted "Shame! Shame! Shame!" over and over again as the gavel came down.

Here's the C-SPAN footage of the scene:

"This is one of the ugliest episodes I've experienced in my three-plus years as a member of this House," Maloney said after the vote, the Hill reported. Maloney added that the arm-twisting came directly from Republican leadership with House Majority Leader Kevin McCarthy personally leading the effort to swing several votes.

Republicans, who control the chamber, denied any knowledge of wrongdoing, with Speaker Paul Ryan dismissing the amendment as an unmerited intrusion of federal power.

"This is federalism; the states should do this," he said, the Hill reported. "The federal government shouldn't stick its nose in its business."

"The members who switched are going to hold a very special place in American history as the people who didn't have the guts to stand up and support the will of the House," said Maloney, Politico reported. "They literally snatched discrimination out of the jaws of equality."