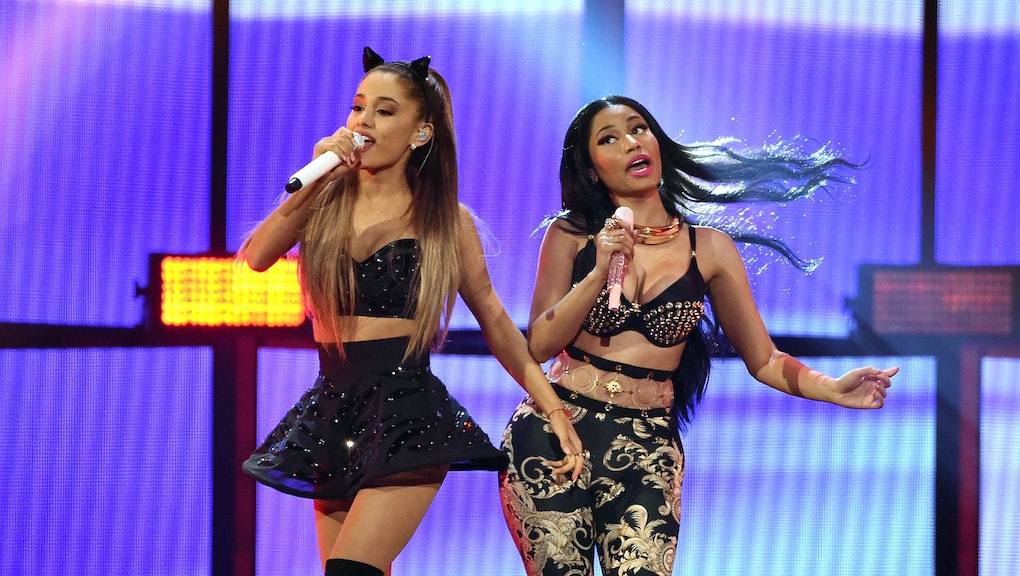 Ariana Grande "Side to Side" Lyrics: Meaning of Singer's Collaboration With Nicki Minaj

"Side to Side," the fifth track off Ariana Grande's recently released LP Dangerous Woman, features Nicki Minaj and is a dancehall-inspired banger that's sure to rule the summer. The song is their third collaboration together, according to Teen Vogue.

In the girl-power song, the two sing about confidently taking charge and not giving up when pursuing someone who catches their eye.

As confirmed by Minaj's rap: "Uh, I-I give zero fucks and I got zero chill in me."

In the first verse, Grande sings: "I'm talkin' to ya/ See you standing over there with your body/ Feeling like I wanna rock with your body/ And we don't gotta think 'bout nothin' ('bout nothin')/ I'm comin' at ya/ Cause I know you got a bad reputation/ Doesn't matter, cause you give me temptation."

After all, as Minaj reminds us, "I'm the queen of rap, young Ariana run pop." The full lyrics to "Side to Side" can be found on Genius.

Grande released Dangerous Woman on Friday. The album, her third, follows 2014's My Everything and includes 15 tracks, including "Into You" and the album's eponymous "Dangerous Woman," both of which were previously released.

Read more: Ariana Grande Is a Very Different and "Dangerous Woman" on Her Latest Single