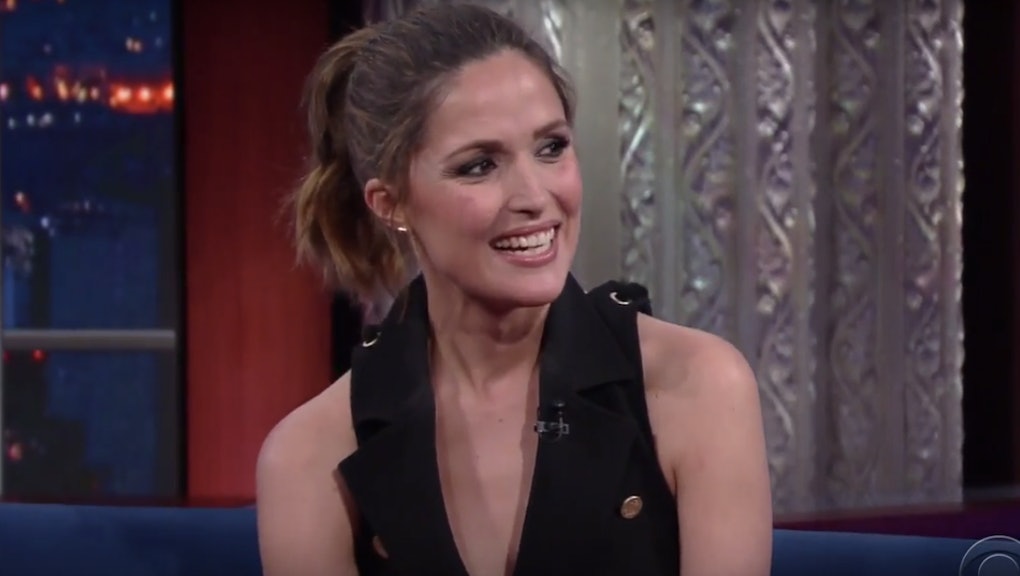 The Transportation Security Administration takes your safety as an airline passenger very seriously. This is why knives, guns and snakes are all forbidden carry-on items. Another thing you apparently can't bring: more than 3.4 ounces of the breast milk of Australian Neighbors 2 actress Rose Byrne.

Byrne — who had a baby with her very hot husband Bobby Cannavale earlier this year — discussed the trials and tribulations of flying with breast milk on the Late Show with Stephen Colbert Thursday night.

"I've been doing a lot of traveling," she said. "So I've been taking my, um, breast milk everywhere with me."

Everywhere but on actual flights, that is. Colbert quickly pulled out a photo of Byrne being detained at an airport earlier this year because her sippy cup of freshly pumped breast milk had exceeded the 3.4 ounce carry-on limit for liquids.

Here's what Byrne had to say about the experience:

They wave this weird thing over the top of [the sippy cup], and there's a whole production going on. They take it very seriously that it could be something... I just stand there and smile and tell them that it's really breast milk, and that it's nothing.

Of course, it's not actually "nothing." It's breast milk! And it is a clear threat to passenger safety. But it's not the first time a mom has publicly griped about being forced by the TSA to ditch her breast milk. Last month, mom Jessica Coakley Martinez wrote a viral Facebook post complaining of a similar experience after she was forced to dump nearly four gallons of breast milk at Heathrow Airport.

Oh, wait. They already are.