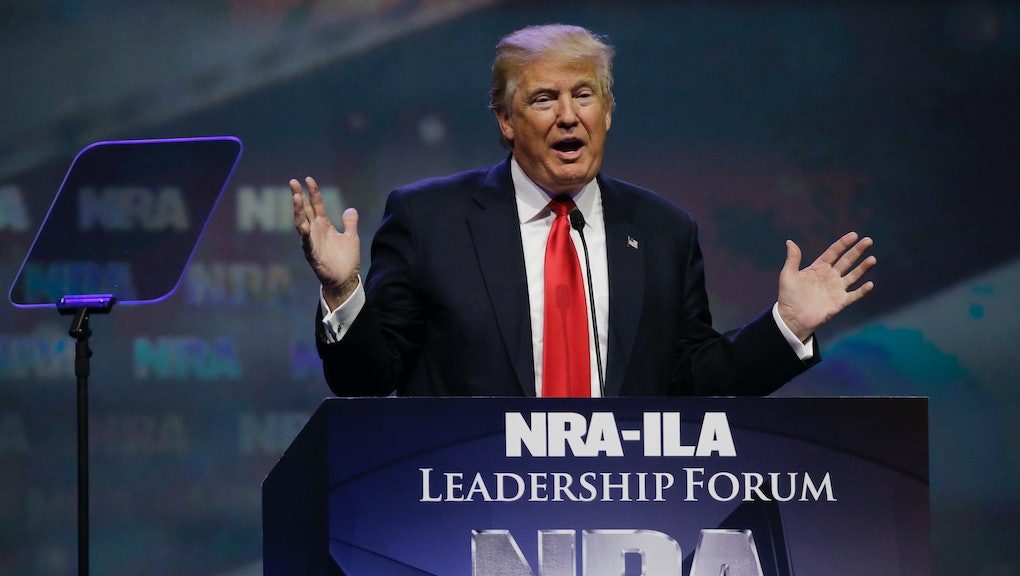 Moments after receiving an endorsement from the National Rifle Association, presumptive Republican nominee Donald Trump launched an offensive against Democratic rival Hillary Clinton's gun platforms, going so far as to suggest that the bodyguards who protect her be disarmed.

"Crooked Hillary wants to get rid of all guns and yet she is surrounded by bodyguards who are fully armed. No more guns to protect Hillary!" he tweeted on Saturday.

On Friday, Trump told the assembled crowd of NRA members that, if elected, Clinton would seek to use her appointed Supreme Court justices to ban gun ownership.

"If she gets to appoint her judges, she will abolish the Second Amendment," he said. "In my opinion, that's what she's going to go for."

Although Trump has often repeated claims that Clinton will seek to abolish the Second Amendment if elected, Clinton has never held that position.

On her website, Clinton writes that she will advocate to "Strengthen background checks and close dangerous loopholes in the current system," but also acknowledges that "gun ownership is part of the fabric of many law-abiding communities."

On Friday, Clinton immediately rebuffed Trump, citing a Centers for Disease Control and Prevention statistic that claims 33,636 Americans die by firearm deaths each year as something we should never accept as "normal."