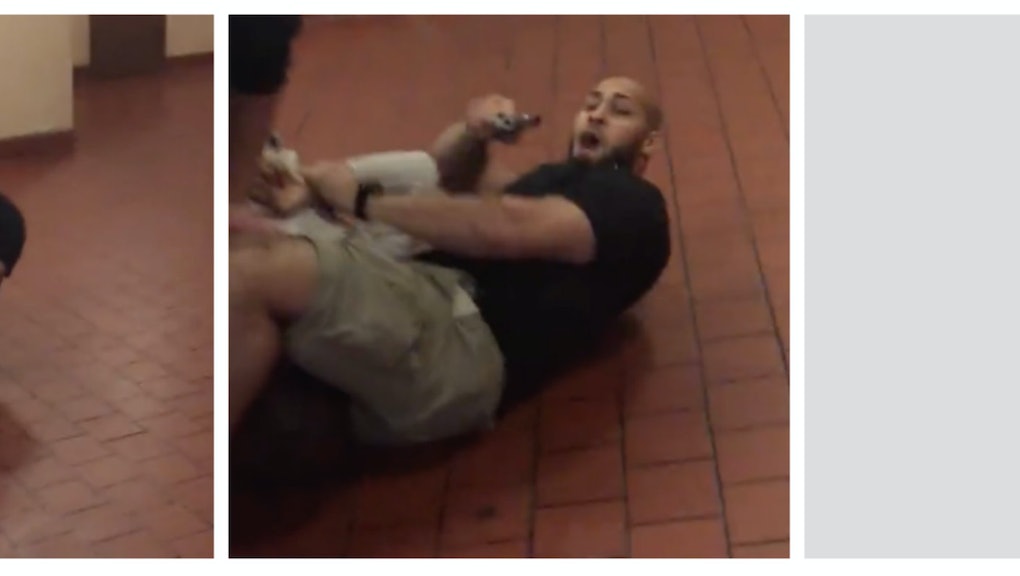 After punching a bystander and then pulling out his gun to intimidate a man videotaping him, NYPD Officer Risel Martinez has been stripped of his badge and gun and placed on modified duty.

According to NY1,  Martinez entered a Harlem building looking for an earlier suspect who was part of a group of motorized bike riders who'd interrupted a car stop the officer was performing. According to onlookers, though the man did not resist arrest, he was beaten anyway.

"Put his hands up [and said] 'I don't want no problems,'" Calvin West told NY1. "Cop punched in his face about three or four times, slammed him on his head."

West then took out his camera and began recording.

Martinez pulled out his gun and pointed it at several bystanders as he held the suspect in a chokehold. The bystanders began to yell "Don't shoot!"

"He held the gun out like he was one of them goddamn gangsters or like a gang member, you know, and saying, 'Get away, get away,'" tenant association president Deloris Johnson told NY1.

The person in the chokehold can also be heard saying, "I can't breathe" — the same final words of Eric Garner, who was choked to death by a New York City police officer in 2014.

In video of a separate incident obtained by NY1, Martinez is seen punching a person videotaping him outside an apartment building. Martinez has had his badge and gun taken away.

A community activist told NY1 that he thinks this is a sign that cops do not want their activities videotaped, even though the act is completely legal.

"I think a lot of officers are starting to react again like they were reacting a year to a year and a half ago when people were videographing them," Jose LaSalle of the Cop Watch Patrol Unit said told NY1. "They were attacking them, taking their phones, locking them up."

The NYPD did not immediately respond to a request for comment. We will update this piece upon receiving a response.