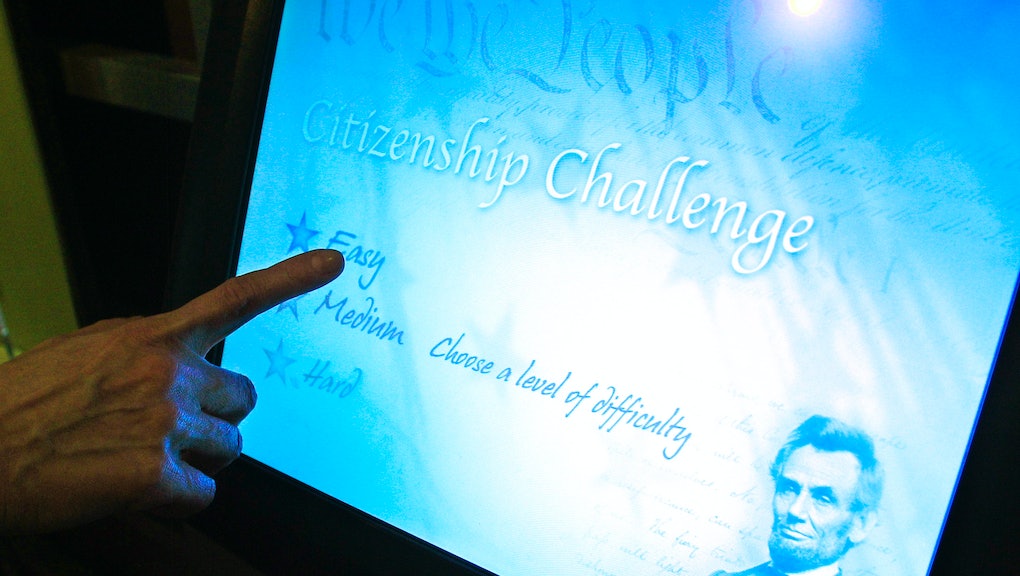 The people of the U.S. have lost faith in institutions and are becoming skeptical of the two-party political system, with the presidential election now hinging on a competition between two widely disliked candidates. Something needs to be done!

Here's a conservative columnist with a postulation: Require voters to pass a poll test.

"A person need only survey the inanity of the ongoing presidential race to comprehend that the most pressing problem facing the nation isn't Big Business, Big Labor, Big Media or even Big Money in politics," deduced David Harsanyi, senior editor of conservative/libertarian website The Federalist, in the Washington Post on Friday. "It's you, the American voter."

"And by weeding out millions of irresponsible voters who can't be bothered to learn the rudimentary workings of the Constitution, or their preferred candidate's proposals or even their history, we may be able to mitigate the recklessness of the electorate," he propounded, later adding, "If you have no clue what the hell is going on, you also have a civic duty to avoid subjecting the rest of us to your ignorance."

Harsanyi pulled a sample of questions from the U.S. Citizenship and Immigration Services naturalization test, such as "If both the President and the Vice President can no longer serve, who becomes President?" and "There were 13 original states. Name three."

"Now, some of you will accuse me of peddling crass elitism," Harsanyi concluded. "But I say the opposite is true. Unlike the many who depend on ignorant voters to wield and secure their power, I refuse to believe that working-class or underprivileged citizens are any less capable of understanding the meaning of the Constitution or the contours of governance than the supercilious one-percenters."

It's a passionate argument for something Congress dealt with more than 50 years ago, when it passed the Voting Rights Act in 1965, which struck down a maddening array of voter application requirements and literacy tests predominantly used in Southern states to disenfranchise minorities — the Jim Crow era. Lots of Twitter users, for example, made the connection.

Harsanyi's proposal asks instead that "all races, creeds, genders and sexual orientations and people of every socioeconomic background are similarly inhibited from voting when ignorant," which is a polite way of saying: If his proposal disenfranchises large numbers of people, so what?

One study conducted by the Center for the Study of the American Dream at Xavier University found just "65% of native-born Americans" could answer six out of 10 citizenship questions when asked. Just like with voter ID laws which have sprung up around the country, there's the thinly veiled implication proponents of a literacy test aren't high-minded constitutional idealists, but simply don't like the people failing to meet the requirements.

Another study of voter ID laws painted a pretty good picture of who those people are: minorities and Democrats. Though with disdain for presumptive GOP nominee Donald Trump still lingering among some on the right, Harsanyi might be taking a stand for aggrieved conservatives worried about the discontented rabble on their side, too.