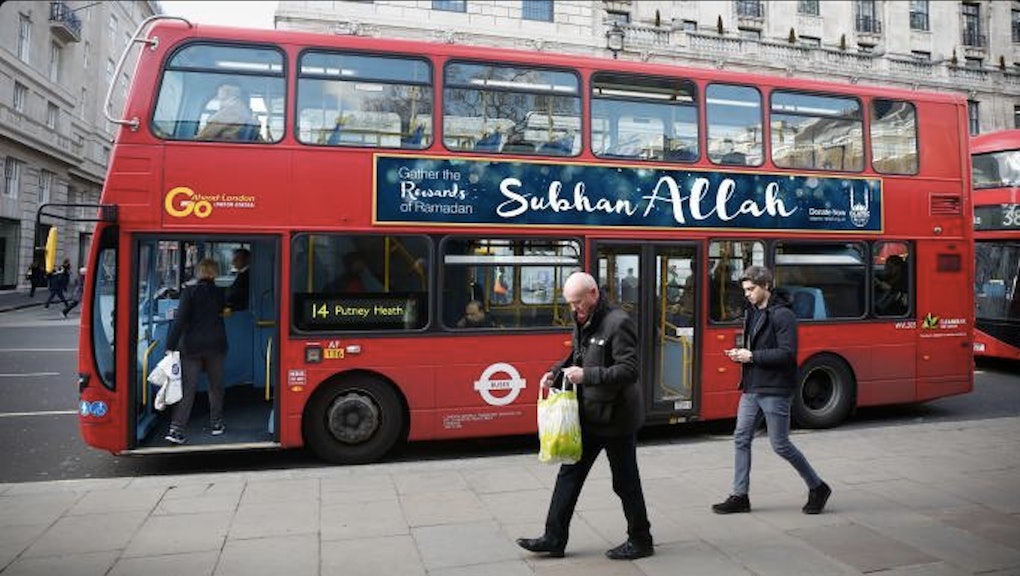 On Monday, as part of its campaign to promote assistance to Syrian refugees, Islamic Relief — the United Kingdom's largest Muslim charity — placed ads on public buses that read, "Subhan Allah," translating as "Glory be to Allah" from Arabic. And people everywhere are freaking out — 'cause, ya know, Muslims...

The ads will be on the ubiquitous red buses in cities across England, including London, Manchester, Birmingham, Leicester and Bradford. They were placed in time for the holy month of Ramadan when practicing Muslims fast as part of the soul's purification, which begins June 6.

Donating money during Ramadan is regarded as a greater blessing than any other time of year, making it a prime time to encourage giving to the refugee cause. One of the Five Pillars of Islam, known as Zakat, mandates that Muslims give 2.5% of their annual income to the needy.

Some of the outrage expressed over the ads has linked Khan's election to the Islamic Relief charity ads, which have no known association.

"In a sense this could be called a climate change campaign because we want to change the negative climate around international aid and around the Muslim community in this country," Imran Madden, director of Islamic Relief's U.K. branch, told the Independent.

"International aid has helped halve the number of people living in extreme poverty in the past 15 years, and British Muslims are an incredibly generous community who give over £100 million [$144 million] to international aid charities in Ramadan," Madden added.