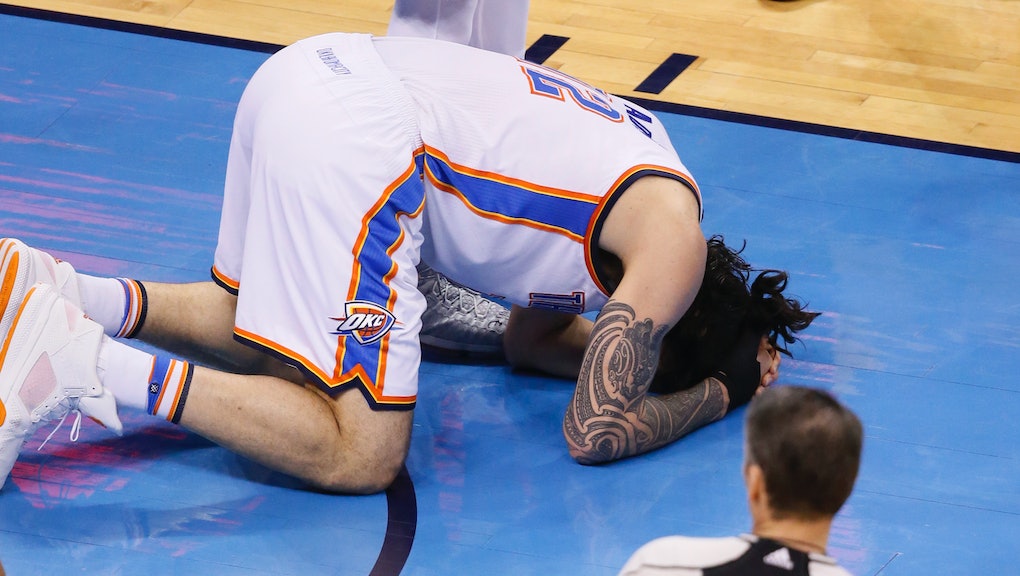 Why Does Getting Hit in the Balls Make Your Stomach Hurt? Let a Urologist Explain

When you take a knee to the junk, like Oklahoma City Thunder center Steven Adams did during last night's NBA playoffs game, the pain doesn't live in the testicles. It ascends, climbing up the nerves into the stomach, where it grows into a bellyache, momentarily incapacitating you.

Why is it so painful, and why doesn't it hurt precisely where you get hit?

During early development, testicles form from tissue in the abdomen. When they're mature, they descend into the scrotum (usually). But the testes don't just cut ties with the abdomen like some prodigal son striking out on his own. The connective tissue still exists, and with it, all those sensitive nerves that tell your brain you've been hit in the bits. So when you're hit below the belt, the pain rises.

Let a urologist explain: "Minor injuries with those symptoms are fairly common; it's incapacitating in the short term, but you rarely see long-term issues," Dr. Stephen Strup, chief of urology at the University of Kentucky, told ESPN.

"The major injuries are when you actually crush or rupture the testicle," he said. "If they're hit too hard, they'll split like a tomato and the skin breaks and you can have excruciating pain."

"Split like a tomato" is my new least-favorite visual for my testicles. So thanks, Dr. Strup.