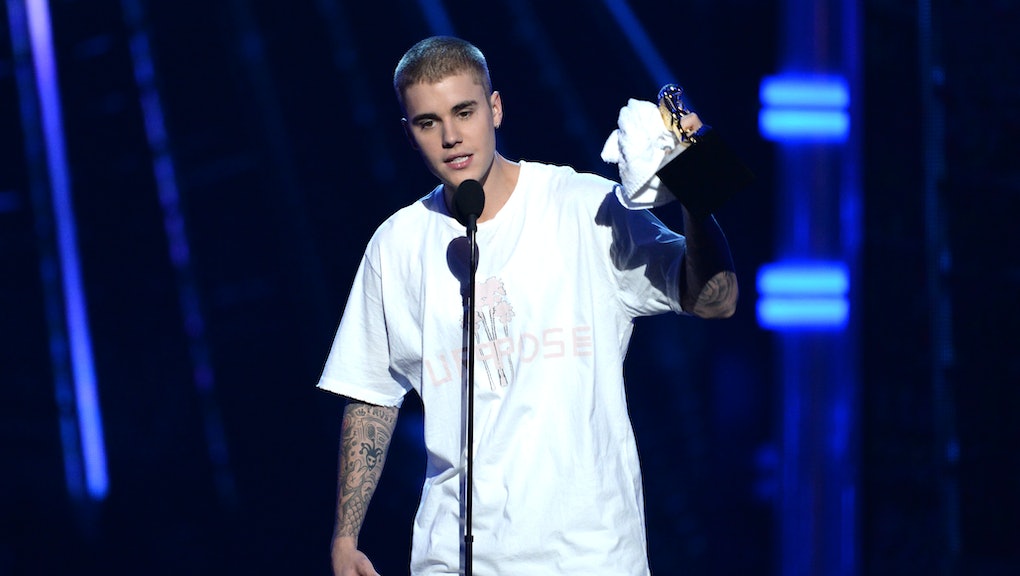 Earlier this month, Justin Bieber sent Beliebers into a frenzy when he announced he wouldn't be taking photos with fans anymore. In an Instagram post at the time, the 22-year-old singer said he felt like a "zoo animal" and needed to implement the change to "be able to keep [his] sanity."

Now, after Sunday night's Billboard Music Awards, Bieber is taking down yet another facet of celebrity culture: award shows.

Accompanying a photo of sheep grazing in a field outside of a castle, Bieber wrote, "No disrespect to anybody at any of the shows or the people running it. Nothing but love for you guys and your support. But I don't feel good when I'm there nor after. I try to think of it as a celebration but can't help feeling like people are rating and grading my performance."

Bieber went on to question the purpose of award shows and accused them of being a phony spectacle. "I get the premise is to award people for their accomplishments, but is it really?" Bieber wondered. "Because when I look in the audience I see a bunch of fake smiles so that when the camera hits them they look happy."

The singer, who performed hits "Sorry" and "Company" on Sunday night, said he didn't mean to diss the few who are "truly proud of others," but said he believes the "vast majority" of people buy into the misguided award show myth.

But before haters tear down Bieber for what often gets termed "diva"-like behavior, Rolling Stone writer Brittany Spanos offered some perspective on Twitter:

And Spanos said Bieber could even be sending a positive message to his young fans.

Spanos added that she wondered what might have happened if Britney Spears had felt free to take the same steps for herself when the media speculated about mental health issues in light of public "breakdowns" in 2007 and 2008.

Female celebrities have spoken out against the toxic culture of red carpet events, which typically include body shaming, objectification and plain ol' sexism. But the social pressure and harsh criticism Bieber speaks of affects people of all genders — and can be crazy-making.

"I am privileged and honored to be recognized by my peers ... but in these settings I can't feel the recognition," wrote Bieber on Monday. "There's an authenticity missing that I crave!"

Read more: In One (Failure to) Tweet, Justin Bieber May Have Just Cost Himself $650,000