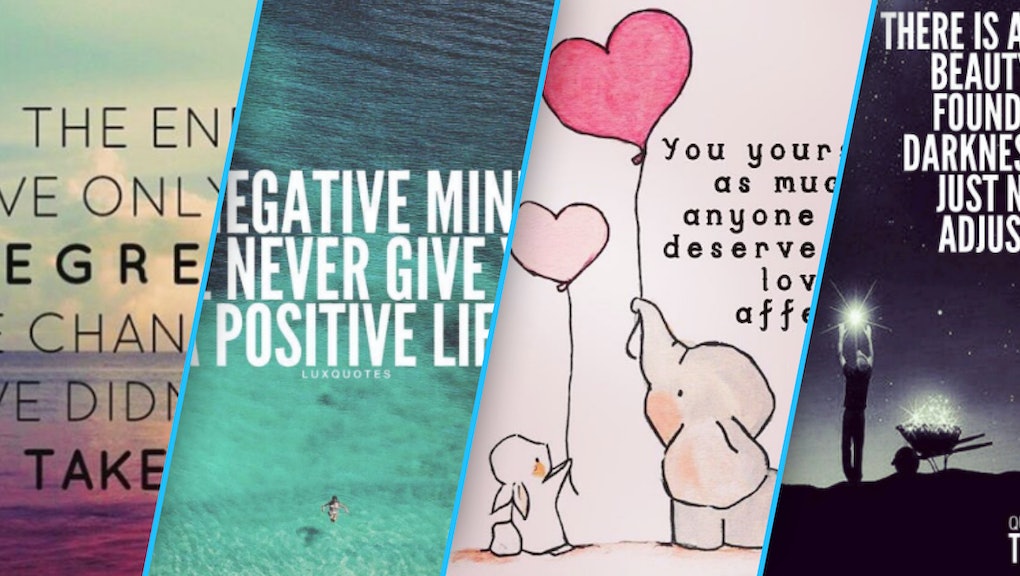 Can #Inspirational Quotes on Instagram Actually Change Your Mood?

Instagram is inundated with #inspiration. There are over 1 million posts with the hashtag #inspirationalquotes alone. That isn't including #inspiration itself, which has over 48 million, or #inspo and #inspired, which have around 4 million pics each.

Rolling your eyes? You're not alone. These messages, like the sunset images they're pasted over, are cliched as hell, and Instagrammers tend to dismiss them as internet trash. But there must be a reason for their popularity. Could they have some surprising mental health benefit?

Maybe you were fired. Dumped. Cheated on. Robbed. You're down in the dumps. Can mindlessly scrolling through these inspirational quotes turn your day around? Can they help individuals who may be experiencing depression or anxiety?

Mental health experts say... probably not. "I've had feedback from clients who don't like that kind of thing," said Nicole Amesbury, therapist and head of clinical development at online therapy app Talkspace, in a phone call. "They think it's trite or phony. I think it has to do with the oversaturation of it. In therapy, being personal and creating meaning is so important."

Just because a photo is hashtagged #inspirational doesn't mean it will inspire you. Chances are, you probably aren't going to feel instantaneously inspired when you happen upon a generic quote plastered on top of a soaring eagle.

"I can't think of something more annoying when I'm feeling depressed than seeing a pithy quote," Austyn Snowden, mental health professor at the University of West Scotland, said in a video chat.

The surprising news: It's different for people who post them. The individuals who spearhead these quote-riddled accounts can often gain something positive from uploading and sharing them, rather than just passively absorbing.

"I'm a very social person in real life, but I have a lot of trouble expressing my emotions and really just feeling love I guess," said the creator of @recoverysayings, an Instagram account with over 1 million followers, in an Instagram direct message. "So I decided to start up this account where I can vent."

"No one in my real life really knows about it, and I just don't really want people to, because it's very personal to me," they said.

The creator of @recoverysayings started the account during their freshman year of high school. It's since been two years. The account updates at least once a day.

Peter Bone, a social media influencer, started the Instagram account @achievetheimpossible, which has around 766,000 followers, after his dad was diagnosed with terminal cancer in December 2013.

"When I was struggling after Dad's diagnosis, I went straight to words and quotes," he said in an Instagram direct message. "I wouldn't have cared about inspirational pics or photos."

For the creators of these Instagram accounts, posting an inspirational quote gives them peace of mind.

"I've been able to find great quotes and relate with them and talk to others," the creator of @recoverysayings said.

"I was going through a tough time myself, and started looking to quotes to rediscover my passion and purpose for life," Bone said.

Is there a trick to finding actual #inspiration? As I mentioned above, there are millions to browse from, and it's not a one-size-fits-all kind of thing.

"It's about the connection," Snowden said. "If someone recognizes themselves in a quote, that connection in itself can be helpful for sure, because people will feel that someone is feeling the same thing as them and therefore not alone."

The takeaway: Don't use #inspirationalquotes as therapy. If you need a little bit of cheering up, sure — head into the digital wilderness of scenic backdrops and ancient proverbs. But if you suffer from a serious mental health issue, this isn't a proven solution.

I asked Snowden if he would use Insta-inspo to treat his patients with severe mental health problems. "Oh god, no. No, absolutely not," he said. "You need to test it as a theory. It's an untested theory. My immediate gut reaction is, god, no."

Amesbury doesn't think that inspirational photos will actually inspire you — they just invite reflection, and self-reflection can give you a positive feeling. She said it can give you something to focus on, but it's not going to inspire action.

According to Snowden, finding actual uplifting content in image macros is about connection, authenticity and coherence. It's about interpreting an inspirational quote with what is consistent with the way you exist.

We like things that remind us of ourselves. The creators of accounts like @recoverysayings and @achievetheimpossible are able to pinpoint the quote that resonates with them — finding that reflection themselves. But for the rest of us, scrolling through the #inspirationalquotes tag page as a means to feel better is probably a futile effort.

"The idea that you could save the world through pithy quotes is, I'm sure, wrong," Snowden said.