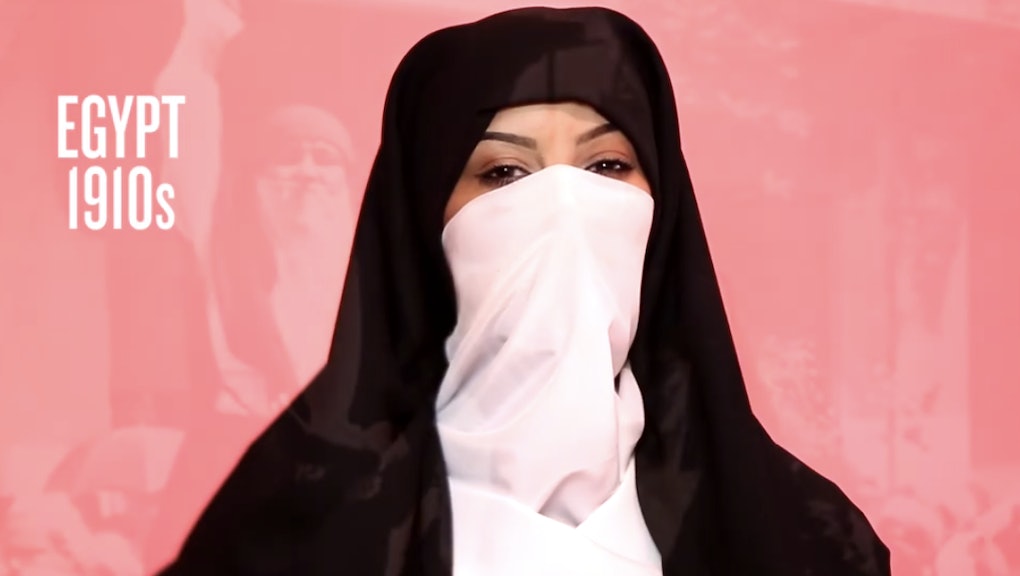 With fashion officially obsessed with modest clothing, more women are curious about the hijab. After all, Dolce & Gabbana sells them, as does the more affordable retailer Uniqlo, and a woman wearing a hijab recently popped up in an H&M ad. According to Al Jazeera, women in Sweden who aren't Muslim are fully embracing hijabs, wearing them more like a fashionable accessory than a deeply personal religious garment.

But to millions of women, it's much more than a fad or a fashion statement or even a trend. And now there's video from the website MuslimGirl, titled "100 Years of Hijab Fashion," to show you just that.

"Today's industry is quickly catching onto the modest fashion trend, but the hijab is much more than a fad," Muslim Girl's staff wrote. "While more and more businesses are seeing it as a lucrative commodity, the headscarf is a religious garment just as much as a political one."

The video is laid out much like the "100 Years of Beauty" videos you've probably seen if you've glanced at the internet for five seconds in the past year. Starting in the 1900s, the video shows women in various countries through time wearing hijabs, showing the hijab isn't restricted to one country or nationality or ethnicity.

For instance, in 1910, the model is a woman in Egypt and behind her is a picture of a woman dressed similarly at a political rally.

For the 1930s, the video heads to Palestine, which was experiencing nearly constant political turmoil, to showcase an entirely different style.

The video aims to not just focus on the style of the hijabs, but focus on the politics, moving from country to country with each decade to a show what a hijabi looked like during these various political conflicts.

"For generations, it has been a powerful symbol of Muslim women's defiance against the male gaze, colonialism, and Islamophobia as we know it today," MuslimGirl wrote. "It's also become a politicized garment that represents Muslim women's control and autonomy, and has been at the center of a tug-of-war between governments and the people for its reclamation."

The video also shows viewers the dupatta, which was popular in Pakistan in the 1940s, and is more of a cultural garment that can be worn by non-Muslims as well.

The video has been viewed more than 430,000 times, but is experiencing a bit of criticism. In the comment section below the video on Facebook, people are wondering why more sub-Saharan countries aren't represented and why the staff didn't feel the need to bring in a model with darker skin. With Muslim women as diverse as they are, according to one commenter, it's important to remember "not every Muslim is Arab, and not every Arab is Muslim."

What this video is able to accomplish in one minute, though, is show people how diverse women who wear the hijab are, and how powerful it's been in the past, whether it part of a political revolution or one woman's personal decision in accordance with her faith. Although there have been "100 Years of Beauty" videos have included women in hijabs before, MuslimGirl wanted to bring a deeper meaning to this video in particular.

"We didn't want this to be another cutesy hijab fashion video," MuslimGirl founder Amani Al-Khatahtbeh told Elite Daily. "We wanted to add history, culture and intention behind the message."

You can watch the entire video below: