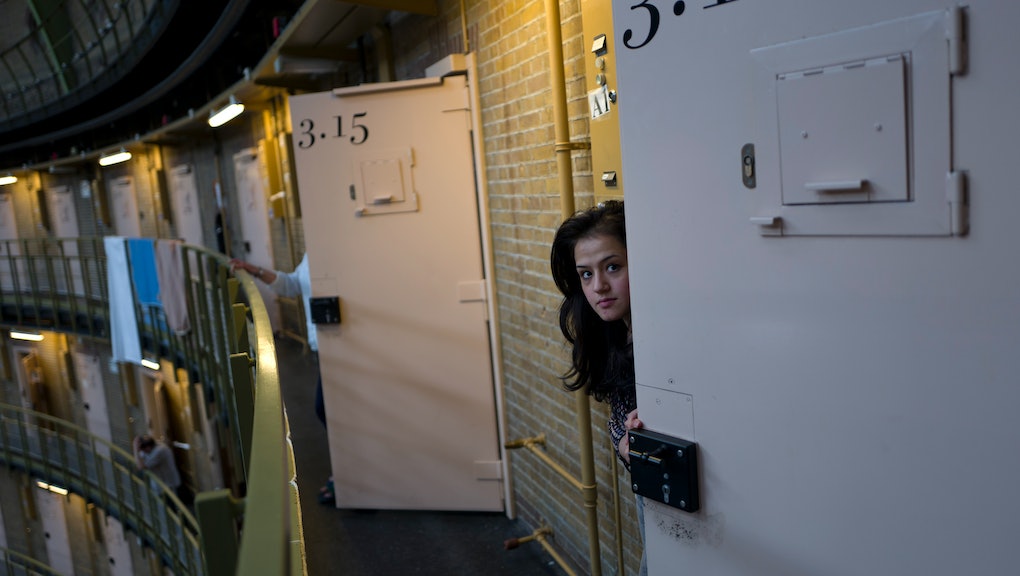 But when he heard that in the Netherlands, refugees and migrants were living in prisons, he had to see it for himself.

"I didn't want to believe it myself that prisons became shelters," Muheisen told Time.

Muheisen spent months convincing the government to grant him access to De Koepel facility in Haarlem, Netherlands, one of the prisons holding asylum seekers and migrants.

How did these refugees wind up living in prison?

So the Dutch government hatched a plan:

Muheisen, who has documented the lives of migrants in Europe and Asia for years. Once he was granted unlimited access, Muheisen spent several weeks visiting visiting refugees of all ages from dozens of countries, all waiting in a prison that's their temporary home to find out where they'll be sent next.

He captured their experience from a stunning perspective:

An Afghan refugee gazes out the window of his cell while holding a child in his arms on April 10.

A gay Moroccan migrant, who requested anonymity, poses in his cell on April 26.

Reda Ehsan, a 25-year-old Iranian migrant, sprawls out on a table in the central court of the former prison on May 6.

A volunteer teaches an Afghan refugee how to ride a bike in the yard of the former prison on May 2.

Algerian and Libyan migrants talk over cigarettes in the yard of the former prison on May 2.

On May 1, 24-year-old Yazidi refugee Yassir Hajji fixes his 18-year-old wife Gerbia's eyebrows in their cell.

Naaran Baatar, a 40-year-old Mongolian migrant shoots some hoops in the yard of the former prison on April 20.

Refugees and migrants play soccer together in the central court of the former prison on May 10.