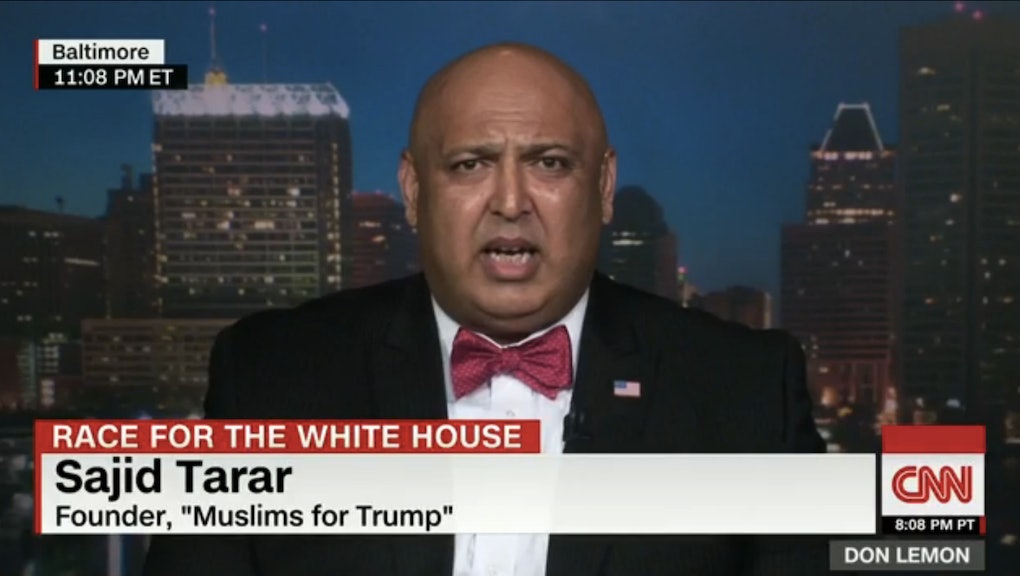 Some American Muslims are backing Donald Trump this election cycle — and no, it's not a joke.

On Monday evening, Muslims for Trump founder Sajid Tarar appeared on CNN with Don Lemon to explain how the likely Republican nominee is the best choice for the American Muslim community.

During the segment, Tarar expressed support for Trump's ban on all Muslims — even though he's an immigrant from Pakistan. Lemon, noticing an element of hypocrisy in this belief, pushed back by asking Tarar how it could be possible to reject Muslims immigrating into the United States when he is an immigrant himself.

"Aren't you a Muslim immigrant to this country? How can you say that you can come in, but no one else can?" Lemon asked.

Tarar had trouble responding, saying he "came here legally" and went through a screening process. Muslim immigrants — not to mention refugees, who already go through a tenuous vetting process — are often subjected to a "secretive immigration program" unlawfully delaying their citizenship process, according to Buzzfeed.

He later insisted that Trump's ban is only temporary until the U.S. can find out why Muslims are seeking to immigrate into the country and understand their "objective."

"I wouldn't want to see this country going on a chaos like Belgium and France and, you know, the situation of radicalizing," Tarar said. "The current administration hardly use the name 'radicalize' or see that and identify this issue. It's an ongoing issue. We have to solve it, otherwise we will be feeling guilty for it. We have to create a safety net."

"And like there is a saying, 'Every Muslim is not a terrorist, but every terrorist is Muslim,'" he added.

The internet was having none of this, and took to Twitter to call out the anti-Muslim rhetoric spewed:

Some thought he was making a "fool" out of himself with his support for Trump — and with the bow tie he was wearing:

Some pointed out a double standard in coverage of minorities supporting candidates other than Trump, and that CNN is an example of the media "normalizing" Trump's bigotry.

And some said Tarar will cry when he realizes what he has done: