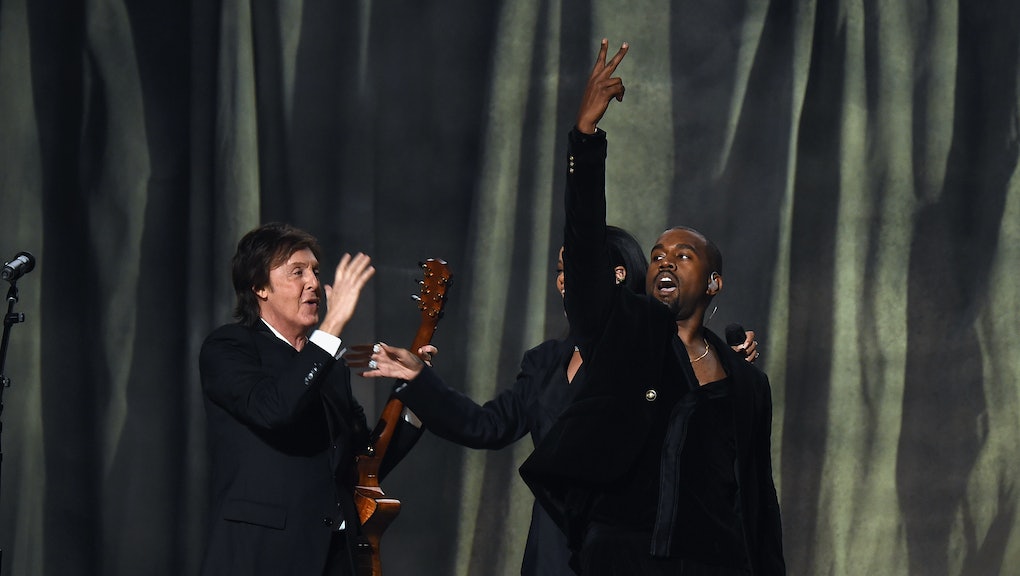 "Urban" is not synonymous with "black." But if a recent radio interview with BBC Radio 4 is any indication, no one's told Paul McCartney that.

According to Rolling Stone, rapper Kanye West sampled an unrecorded melody of McCartney's, which the former Beatle had once whistled for the rapper, assuming it wouldn't resurface. Much to McCartney's surprise, it did.

"I get this track back, a thing called 'All Day,'" he said, according to Rolling Stone. "[West's] taken my melody and he's made it seriously urban, which is funny because the lyrics use the n-word – a lot! 'How long have you been at the mall? All day, n-word.'"

During the Mastertapes recording, which according to the Guardian took place in front of a "star-studded audience" at BBC's Maida Vale studios, the musical icon admitted that some in his circle urged him to distance himself from West.

"People like Oprah, who's a little conservative about that stuff, said, 'You shouldn't do it, even black people shouldn't use that word,'" McCartney recalled. "I said, 'Yeah, but it's Kanye! And he's talking about an urban generation that uses that word in a completely different way.' It's the context. So I was actually pleased with it."

In both instances, McCartney seems to have meant black — and that's a little bit racist, as Hamilton Nolan explained in a 2012 post for Gawker.

"Are black people urban?" he wrote. "Sure, sometimes. Here are some other things that are urban: multiple Starbucks locations in a two-block radius, The Real Housewives of New York and power lunches at The Essex House."

Urban does not mean black. It does not mean "gangsta lifestyle," Nolan clarified, noting the increasingly white demographic found in U.S. cities. Old wealthy white men — how far out of touch they tend to fall.

But hey, McCartney and West are good buddies, the 73-year-old rocker said: "I love Kanye, and he loves me. He's a monster, he's a crazy guy who comes up with great stuff so he inspires me."