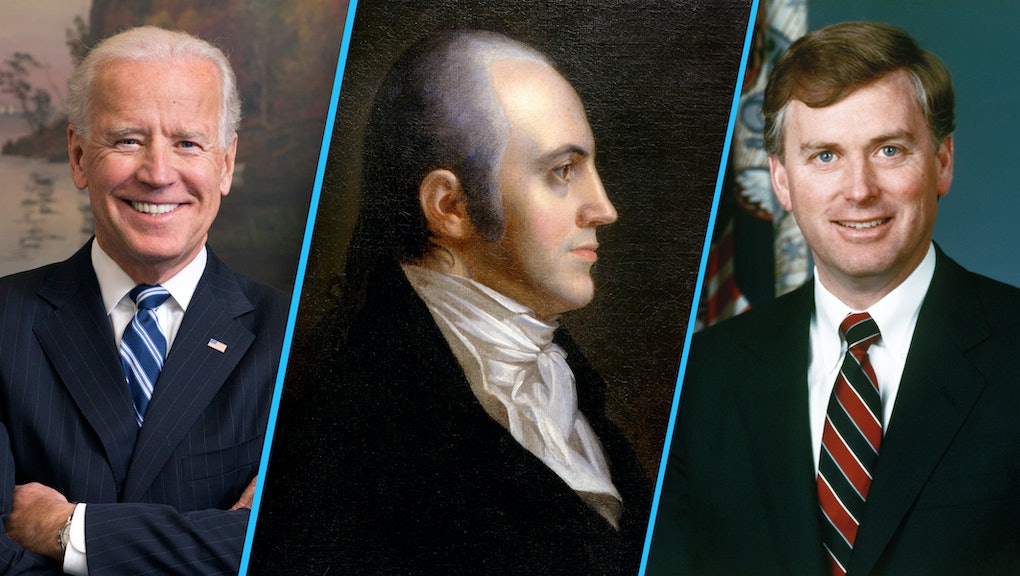 With the final round of the presidential race almost certain to pit Donald Trump and Hillary Clinton in contest for the ultimate prize, arm-chair analysts and other peanut gallery stalwarts are now speculating about an almost equally intriguing question: who the presumptive nominees will select as their running mates.

Will Trump pick an insider like Newt Gingrich, or another brash outsider like himself? Will Hillary Clinton try to eat away at Trump's white, male voter base by tapping, say, Ohio Sen. Sherrod Brown, or will she roll the dice on an all-woman ticket with Massachusetts' Elizabeth Warren?

In today's political climate, the question of who could end up second in command is an important one, given vice presidents' increasing access to the Oval Office. "The last six vice presidents got a lot of face-time with the president," Joel K. Goldstein, a professor at Saint Louis University School of Law and one of the foremost experts on the office, said by phone. "Somebody who is spending a lot of time with the president, that person has a chance of making a difference." Or, perhaps, a complete disaster.

However, that wasn't always the case. The men who have been just a bullet or brain hemorrhage away from the top job are often shrouded in mystery, their purpose unclear. Part of the reason is that their very raison d'être is actually ill-defined and has changed dramatically over the years.

Here's a history of the U.S. vice presidency, and a look at what the job has historically entailed.

For most of United States history, the vice presidency was a boring job. In addition to being at-hand should something untoward happen at the top, the primary purpose of the position was to preside over the Senate. Beyond that, the job carried little actual authority.

"The vice president of the United States shall be president of the Senate, but shall have no vote, unless they be equally divided," reads Article I, Section 3, Clause 4 of the U.S. Constitution. Critically, what this shows is that the framers of the country intended that the veep should be a member of the legislative branch, rather than the executive.

This distinction brought consequences. Out of the executive branch, the vice president was historically removed from major decisions at 1600 Pennsylvania Avenue, but with his limited Constitutional mandate, he was also sidelined in the Senate, save for those rare tie-breaking votes.

Generally speaking, candidates for the nation's number-two spot were chosen less for their abilities and more for practical considerations. "In the old days, they were chosen to balance a ticket, to carry a big state or make peace in the party," said Goldstein.

Indeed, the job has historically only mattered when an assassin's bullet or nature's call forced a vacancy, but even then, new occupants were often met with hostility. When William Henry Harrison, the nation's 9th president, died from pneumonia in 1841 after giving the nation's longest inaugural address without a coat and hat, his successor, John Tyler, was referred to derisively as "His Accidency." When Andrew Johnson replaced Abraham Lincoln in 1865, he was promptly impeached and nearly removed from office.

John Nance Garner, a Texas Congressman who left the supremely powerful position of Speaker of the House to serve as Franklin Roosevelt's vice president for eight years, famously came to regret his decision. He described the vice presidency to a young Lyndon Johnson, himself a future veep, as "not worth a bucket of warm piss."

Garner's assessment was far from an outlier. John Adams, serving under George Washington remarked that, "I am vice president. In this I am nothing." Harry Truman, serving as Franklin Roosevelt's third veep, called the role, "as useful as a cow's fifth teat."

It was only in the 1970s that things started to change for the sleepy office — but when they did, they did rapidly.

The path to power

In the early 2000s, few people were as powerful as then-vice president Dick Cheney. George W. Bush's VP achieved such mythic status as a brooding éminence grise that his critics took to calling him Darth Vader. It was a moniker he adopted with aplomb. "I was honored to be compared to Darth Vader," he told radio host Laura Ingraham in 2011.

When the mild-mannered Wyomingite assumed office in 2001, he took a position already transformed. Vice presidential power arguably reached its apogee under his direction, but the creeping process of unofficial power began decades earlier.

From Nixon to Ford to Carter, veeps were gradually brought into the fold as an advisor without portfolio, and taken away from their limited Senate functions. The process went in fits and starts.

Spiro Agnew, Richard Nixon's first vice president would still later gripe that he had, "no real power to do anything." Still, by the time of Jimmy Carter and Walter Mondale, the process had accelerated.

"Carter really wanted to make something of the vice president," said Goldstein. "Mondale came up with this vision that the vice president shouldn't take on any ongoing function, but should be a general across-the-board advisor."

As power, once gained, is rarely relinquished voluntarily, it's likely the muscular role of today's modern vice president will be with us for a long time to come.