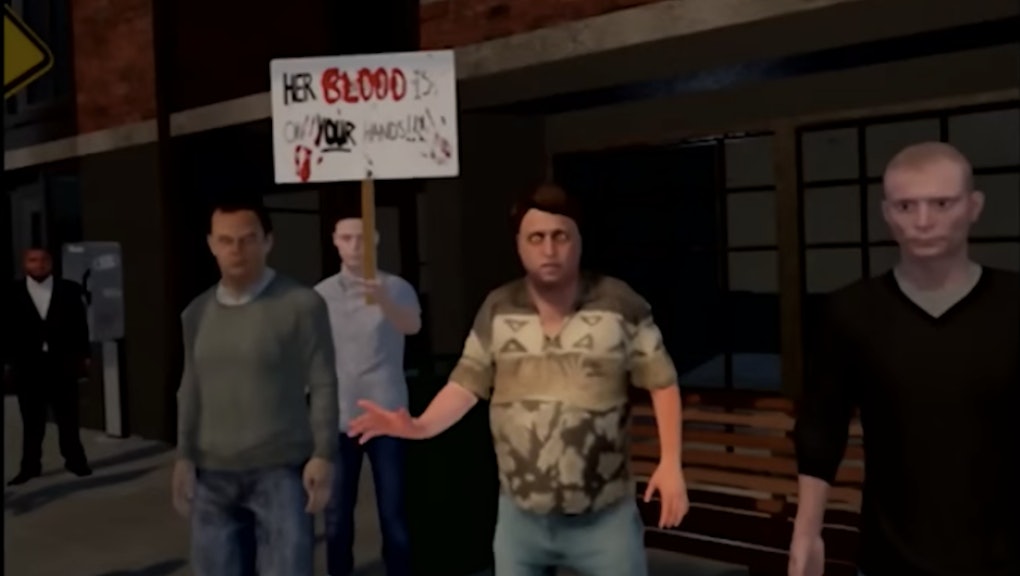 "Wicked jezebel feminist, you're worthless. You're a piece of trash."

"Maybe your parents should've aborted you."

"Shame on you. God's gonna destroy you in a lake of fire and you won't be smiling then."

This is some of the abuse anti-abortion protesters hurl at women entering reproductive health care centers around the country. To stand completely vulnerable in front of a crowd of angry strangers, to absorb their arbitrary invective, is an experience that's difficult to appreciate from the outside. You have to be in it to understand.

That's why three documentarians made Across the Line, a virtual reality film that puts viewers in the shoes of a woman walking before the moral firing squads that sit outside many abortion clinics in the U.S.

Speaking Monday at an event for the film held at New York City's Tavern on the Green, Laugens emphasized just how important it is to "bring to life" the abortion clinic experience for those who would otherwise never have it, especially in the current political climate.

Rarely has abortion opposition run so high as it does today. Providers have experienced an upswing in both violent attacks and hate speech since the now-debunked sting videos of 2015 debuted. As of April 13, 411 abortion-restrictive measures had been proposed in 2016 alone, according to the Guttmacher Institute. TRAP laws are forcing providers to close their doors, often shuttering standard women's and reproductive health clinics in the process. This despite the fact that the Supreme Court upholds the right to abortion under Roe v. Wade.

As escalating protest outside health clinics turns increasingly to violence, Molly Eagen — vice president of Planned Parenthood experience and another of the film's executive producers — explained, it's never been more crucial to bring the reality of that protest to life. Enter Across the Line, which premiered at Sundance in January. Its creators — filmmaker Brad Lichtenstein, his creative partner Jeff Fitzsimmons and immersive journalist Nonny de la Peña — saw VR as the perfect medium to help viewers understand just how scarring it can be to walk into an abortion clinic.

The film opens in a Planned Parenthood exam room. A doctor — Planned Parenthood's chief medical officer, Dr. Reagan McDonald-Mosely — converses with her visibly shaken patient, Kristina, who once had an abortion through Planned Parenthood. The scene is acted but authentic — while everyone knew roughly how the in-office exchange would go, no one knew what would happen when Kristina encountered the protesters in scene two.

From the back seat of a moving car, the viewer sees a crowd of anti-abortion activists, waving graphic signs and clamoring about the wrath of God. Kristina, seated on the passenger side, is approached by a man in a reflective vest, who looks like he should be directing traffic. He isn't there to shepherd cars into the Planned Parenthood parking lot, but rather, to a nearby pregnancy crisis center. Leaning through the open window, he warns Kristina that many women leave the clinic "broken," insisting she has "a more dignified choice."

The film then cuts to an animated scene, a composite of footage from around the country and recordings he took while in the field, out amongst protesters at the handful of clinics he visited during the research phase. As the woman, the viewer faces a crowd of protesters aggressively yelling "whore"; shouting at that she should've kept her legs closed, shouldn't have slept with every guy in the club. The Vive experience lets the viewer walk the line from their animated car to clinic's door, guided by an animated staffer.

The feeling of standing in front of so many enraged cartoons is maybe a tenth as humiliating as the real thing, but still, the anger in the activists' eyes is alarmingly lifelike. It hits home, which is exactly the intended effect. "We really wanted to move you from being the observer to first person experience and what it's like to be her," Lichtenstein said.

That experience, McDonald-Mosely said, is highly accurate, and helps illustrate the trauma protesters add to the emotionally fraught experience of getting an abortion.

Planned Parenthood and the filmmakers are hoping that Across the Line can help infuse anti-abortion rhetoric with a degree of empathy. They're particularly interested in reaching southern women, the legislators making laws that curtail women's access to health care, clinicians, schools and maybe even the protesters themselves. Affordable VR technology like Google cardboard makes it easier to do that. "Instead of leaving a leaflet, we can say to people, watch this short movie," Lichtenstein said. And if they do, the team thinks their movie could make a difference.

"I wish people would take a step back and put themselves in her shoes, and I think that's what's powerful about this movie," McDonald-Mosely said.

"It allows people who've never been in the context [of an abortion clinic] ... [to] experience that. And hopefully this wakes people up and makes them realize these [patients] are people with feelings."

Read more: The Fight Over Planned Parenthood Isn't About Women or Children — But They Lose Every Time