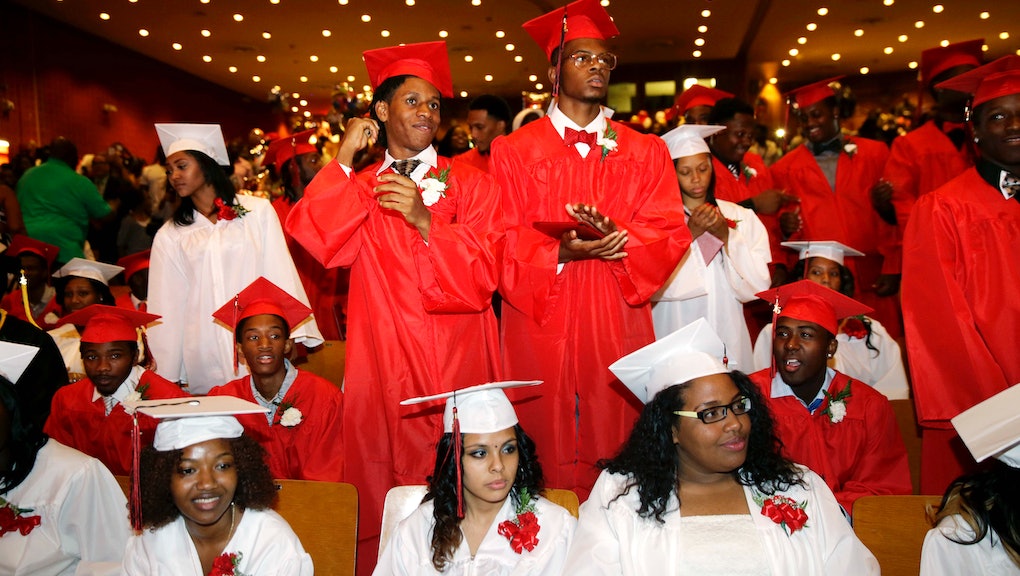 On Feb. 23, Jackson Riemerschmid and his friend Jacob Weingast addressed the New Rochelle Board of Education in New York with a letter — a letter signed by 40 New Rochelle High School students explaining the problem they had with their graduation gowns.

For years, girls were expected to wear white gowns while boys were expected to wear purple, and that made Riemerschmid, 17, Weingast and many of his peers uncomfortable. In fact, to them, this system of assigning colors by gender was "archaic," and had "no place in our community," according to Talk of the Sound.

At the meeting with the school board, Weingast read the letter aloud and afterward, Riemerschmid talked about his own experience transitioning while being a student at New Rochelle High School, and why those graduation gowns were such a problem.

They were there to fight for more inclusion.

Riemerschmid said he realized the issue the second he applied for graduation. "They hand out to all the seniors a slip of paper that asks your height, your weight and your gender," Riemerschmid said in a phone interview. "It says 'male' and 'female.' I just came out as trans this year. I was freaking out and saying, 'What do I put?' because on my records I'm female but I identify as a male."

Weingast thought similarly and weeks before the board meeting, they approached the principal, Reginald Richardson, together to explain that the gowns (and the form for them) weren't inclusive to transgender and non-binary people.

For Riemerschmid, the colors signified even more than just the separation and identification of two genders. "Not only the gender aspect but just the fact that girls wearing white to signify purity and virginity, and guys are wearing purple, which is supposed to signify royalty," he said. "I found that to be sexist.

"Additionally, trans and non-binary students go through so many things like locker rooms and bathrooms and the school's asking them to define themselves along a binary they don't identify with at all."

Surprisingly to both of them, Richardson understood and encouraged the two to take the issue to the Board of Education. And in March, less than three weeks after Riemerschmid and Weingast presented their letter, students won the right to choose the color of their gown, regardless of the gender filed in their records, with Richardson promising just one gown color for everyone in 2017, therefore ending New Rochelle's practice of assigning graduation gowns by gender.

"As we support all of our students on the path to adulthood, we have come to know that a number of them have begun the journey of identifying as transgender, gender neutral, gender-fluid or non-binary gender," Richardson wrote in an email to the community. "Having a single color cap and gown for graduation is an important step toward creating an atmosphere that allows all of our students to enjoy the capstone event of their high school career equally, without the anxiety or fear that gender-specific colors might cause."

Assigning graduation gowns by gender is yet another uncomfortable inconvenience (much like bathrooms and locker rooms) to people who don't define themselves as one gender or another, or identify themselves as a gender they weren't originally assigned. The color of one's gown, and what it can signify, is a minor detail that has larger implications, so it was important for Riemerschmid, who is graduating in June, to fight for this now so classes behind him and trans and non-binary individuals after him don't have any sort of anxiety when they're about to graduate. After all, high school can already be pretty tough.

In bringing the issue of gender-neutral graduation gowns to the attention of his school and school board, Riemerschmid joined a legion of young people who have done (and are doing) the very same thing. Over the past few years, more and more young people have petitioned for the color of their high school graduation gowns to not be reliant on a person's gender for the sake of inclusion.

In 2013, a transgender student at Fostoria High School in Ohio fought for — and won — their right to dress in the color correlating to their gender. In Maryland's Montgomery County in 2015, three schools opted for gender-neutral gowns after student petitions, with five more added to the list to change by 2016. In February, students in Greenwich, Connecticut, fought against girls having to wear white, while boys wear red. Currently, students in East Haddam, Connecticut, want to do away with their blue-for-boys and white-for-girls graduation dress code.

"Schools around the country are beginning to reconsider their policies to ensure that unspoken assumptions and long-held ideas about gender don't have a discriminatory effect on their students," Eliza Byard, the executive director of the national Gay, Lesbian and Straight Education Network, told the Washington Post in 2015.

This new wave of bucking tradition comes at a time when more and more LGBTQ youth are living their truths, with less than half of teens now, according to a recent report, identifying as heterosexual. Additionally, 56% of teens report knowing someone who uses gender-neutral pronouns like "them," "they" or "ze."

"It's become less of an oddity now, and we're getting more comfortable with being ourselves," Riemerschmid said.

Even in the public eye, it's young people who are most outspoken about things like gender and gender norms. In the past few months, Jaden Smith, 17, modeled in a skirt more than once and spoke out against gendered clothing. "I'm just saying that I've never seen any distinction," Smith told GQ Style. "I don't see man clothes and woman clothes, I just see scared people and comfortable people."

Smith is hardly alone. Amandla Stenberg, 17, also recently came out as bisexual and discussed using they/them/their pronouns on her Tumblr. Rowan Blanchard, 14, recently came out as queer as well. With celebrities like these in the public eye, Generation Z seems to be the most open generation about their gender and sexuality on record, and that's helping increase both visibility and understanding among young people.

With a majority of young people more understanding of the issues facing transgender and non-binary people than previous generations, this fight for gender-neutral graduation gowns seems natural. However, the different proposed policy changes across the country haven't avoided backlash. In Greenwich, a Change.org petition was launched online, criticizing the move to augment the gowns' colors.

"It is tradition that the graduating class at Greenwich High School is presented their diplomas in front of a crowd of fellow students in red and white gowns," the petition, which garnered over 400 signatures, reads. "At our last Greenwich High School event we should be given a final opportunity to exercise our freedom with responsibility by expressing both of our school colors."

Days after the petition launched, Greenwich headmaster Chris Winters ditched the idea for gender-neutral gowns entirely. In an open letter, Greenwich Time reported, Winters said he regretted not surveying students before throwing the idea out there.

That's not to say every effort has been met without controversy. A Change.org petition was launched against Riemerschmid and Weingast's efforts with more than 800 signatures. "I'm signing because this entire discussion is based on CHOICES," one signee wrote. "New Rochelle is not unique in this discussion; school officials are deciding all over the country to striping the CHOICES from their communities."

Even after the principal signed off on the policy to let students choose whatever color gown they want to wear when they graduate, Riemerschmid faced a much more serious threat from the opposition. In March, his car was vandalized, first with his side-view mirror getting torn off and then, days later, the back of his car was smashed in and the weapon used (a hammer) was left at the scene.

"Honestly I don't harbor any bad feelings towards those people," Riemerschmid said. "They don't understand what this means to us. Even reading the comments on the counter-petition, it shows me how little they understand about what gender identity means."

Riemerschmid said the threats he faced were worth it, given that now classes after him and non-binary students who are younger than him won't be put in an uncomfortable position upon graduating.

"It just takes initiative whether it be from the administrative point of view or individual," he said. "Even with grad gowns, tons of people who were like, 'Yeah, sure I support trans people' but as soon as they had to change their colors, people started putting on the brakes. We just need a larger understanding of what this means to people because to us, it means a lot."