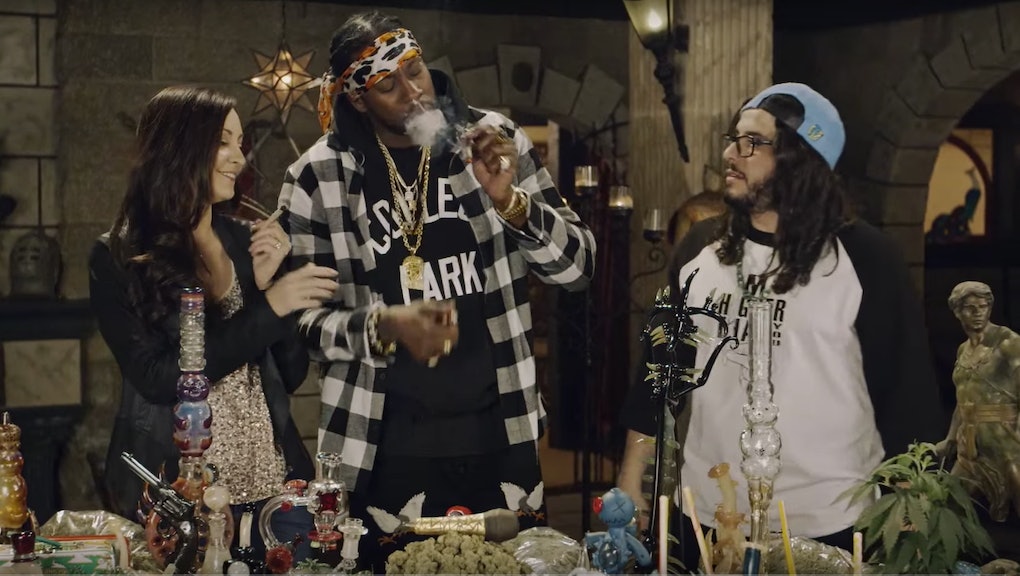 2 Chainz has done what might be the world's most expensive dab.

On Tuesday, GQ shared its third-season premiere of Most Expensive Shit, a web series in which 2 Chainz samples ludicrously opulent junk. Such junk has included a $14,000 chair and $48,000 sunglasses.

Read more: Here's Why Music Sounds So Much Better When You're High, According to Science

In the season opener, 2 Chainz joins Dr. Dina, cannabis consultant and the inspiration for Mary-Louise Parker's character on Weeds, in sampling $500,000 worth of weed products, gold leaf-covered blunts, dabs and bongs. It's a stoner's smorgasbord, and a glimpse into just how absurd the luxury weed market actually gets.

One of the pieces, shaped like a scorpion that appears to grab the user's face — a la the Alien movies — is worth $50,000. The GIF of 2 Chainz hitting it is practically begging to go viral.

Built by glass artist Banjo, the piece is just one of many pieces on the table worth tens of thousands. Another, shaped like the Stay Puft Marshmallow Man, goes for $15,000.

2 Chainz uses another piece to take a dab of pure THC crystals, which cost $2,500 for a small jar. One hit sends the rapper into a daze where he can do little but say, "That's shit so strong" over and over again. 2 Chainz's guide, famed weed aficionado Adam Ill, says one hit of those crystals equates to a full ounce of weed.

It's clearly not unmanageable for a pro like 2 Chainz — he asks for a second hit later in the segment. Watch it in full below.