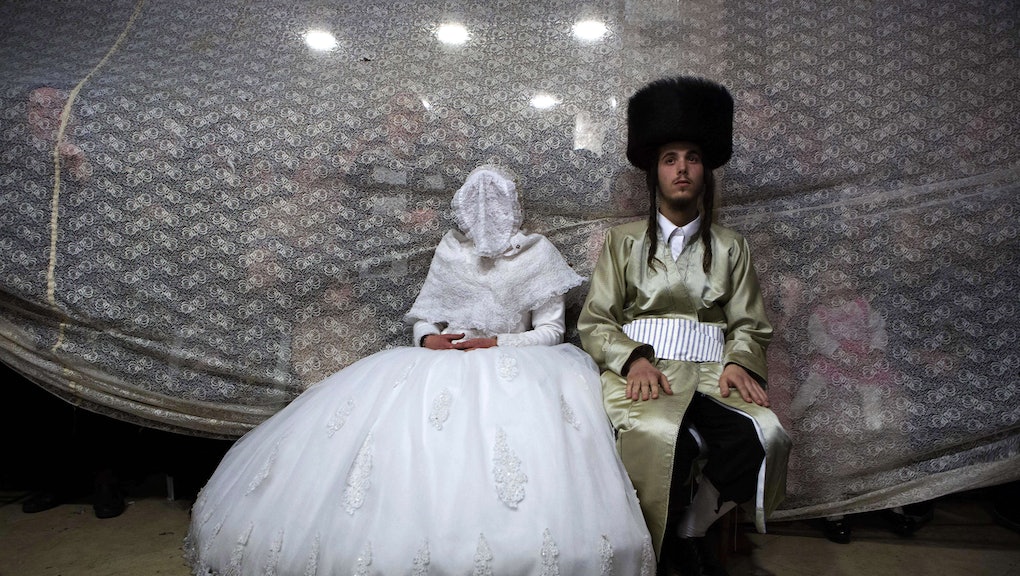 The Israeli news outlet Ynet reported earlier this week on a new dating site for gay and lesbian Jews seeking to couple up and have children together. So far, around 50 people have signed up, ranging from ultra-Orthodox to conservative Jews.

The site's founder, who goes by the name Eran, reportedly started the underground website after a Facebook post he wrote seeking a platonic wife went viral last year, inspiring friends and strangers alike to contact him in search of a similar relationship. It appears these people acknowledge their LGBTQ identity isn't a "phase," but want to stay in the closet nonetheless.

"At first, I tried to help. I made a list and even set some people up," Eran said to Ynet. "But, as the requests multiplied, I decided that it was in everybody's interest to make a framework for it and give people a place where they could find the kind of relationship that they're looking for."

People on Eran's site have wildly diverse expectations for the arrangement, ranging from an open policy on extramarital affairs to users, like "Seeking Truth," who wrote this message according to Ynet: "I'm looking for a woman who doesn't want to follow her orientation, but rather wants to make a real and Jewish home. I'm not looking for a woman who's interested in extra-marital liaisons!"

Israeli Jews have little hope of obtaining religious gay marriage at home with their actual partners, since marriage law falls under the domain of the ultra-Orthodox rabbinate. For this reason, many Israeli couples of all orientations go abroad to get married, a partnership recognized as "civil marriage" when they return to Israel. Yet the idea of Israel's religious law accepting LGBTQ couples is still a distant pipe dream.

Ron Yosef, an activist who founded the Israeli LGBTQ organization Hod for religious Jews, told Mic he knows Eran but has mixed feelings about his matchmaking project. "This is like turning away from the issue, for yourself and for the community," Yosef said in a phone interview.

"It was a common practice [for LGBTQ men to seek heterosexual marriages] until 2008 when Hod was founded. We started talking about the issue and demanding answers from rabbis... For many years Jewish people [in Israel] had no other option."

A Hod survey in 2014 estimated that up to two-thirds of gay ultra-Orthodox men in Israel still marry women. It helps shield them from homophobia and also provides their families with all the benefits given to parents the state officially recognizes as "religious Jews."

Even if those estimates are generous, the stigma associated with being LGBTQ in Israel is still widespread. Last summer, an ultra-Orthodox Israeli man stabbed and killed several people at the Jerusalem Gay Pride parade.

Hod is now at the forefront of working with rabbis to negotiate religious laws surrounding LGBTQ identity and relationships. By 2013, more than 123 Orthodox rabbis in Israel and abroad had signed the community charter in progress, which they call the "Document of Principles." The document argues that coercing LGBTQ people into heterosexual marriages degrades the act of marriage itself and emphasizes the importance of accepting queer people in spiritual communities.

Yosef believes it's the responsibility of individual spiritual leaders to explore how people of faith can honor religious law in a loving gay relationship. "I don't see the Rabbinate [official legal body of rabbis] or the Knesset [Israeli parliament] changing it or allowing gay marriage," Yosef said. But helping people apply ancient traditions to modern life "is the role of rabbis."

"Living a dual life will, in my opinion, usually cause more harm than good."

This phenomenon isn't unique to Israel.  Researchers in Utah who surveyed 1,612 LGBTQ Mormon men in heterosexual marriages found over half of the relationships ended in divorce.  Researchers at Qingdao University have also estimated that around 16 million gay Chinese men were married to women, the Independent reported in 2013. Shanghai's biggest gay dating site, inlemon.cn, even started its own marriage market in 2010 because of the high demand for these "sham marriages," prompting the launch of Chinese apps like Queers and iHomo to help LGBTQ Chinese people find heterosexual marriage partners.

Even in the United States, "sham marriages" are prevalent in religious communities, though there's no reliable data to suggest how common they are. Author Rick Clemons was married to a woman for 13 years before he came out as gay. He now works as a self-described "life strategist" helping LGBTQ men come out.

"This isn't all about sex," Clemons said in a phone interview. "How different is [a sexless 'sham marriage'] from a [sexless] heterosexual marriage? There are lots of sexless marriages out there in the world... but living a dual life will, in my opinion, usually cause more harm than good."

Social worker and family therapist Naomi Mark, who works extensively with Jewish communities in New York, agreed that secrecy is harmful to couples, even if they both know about each other's orientation.

"I would never recommend... a lifelong commitment to secrecy," Mark said in a phone interview. "Marriage and intimacy are challenging enough, and complex enough ... I'm not saying it can't ever be done, that this would never work, but I would never suggest that anyone do it."

Despite the psychological risks, this practice is still prevalent in the ultra-Orthodox Jewish community the world. In a 2013 Thought Catalog article about being queer in Brooklyn, New York, J.E. Reich pointed out how communities still venerate teachings from esteemed rabbis who encouraged LGBTQ Jews to seek heterosexual marriages.

Meanwhile in Israel, Yosef believes helping gay men marry women is a step backwards, stalling progress for both the individual and the community at-large.

"Sex is holiness, marriage is a unique relationship," he said. "I know dozens of people who got married to a woman...it developed a lot of problems...many of these couples eventually get divorced or cheat on their wives and they [the wives] don't know about it. If this is the meaning of marriage, it's a little bit bullshit."