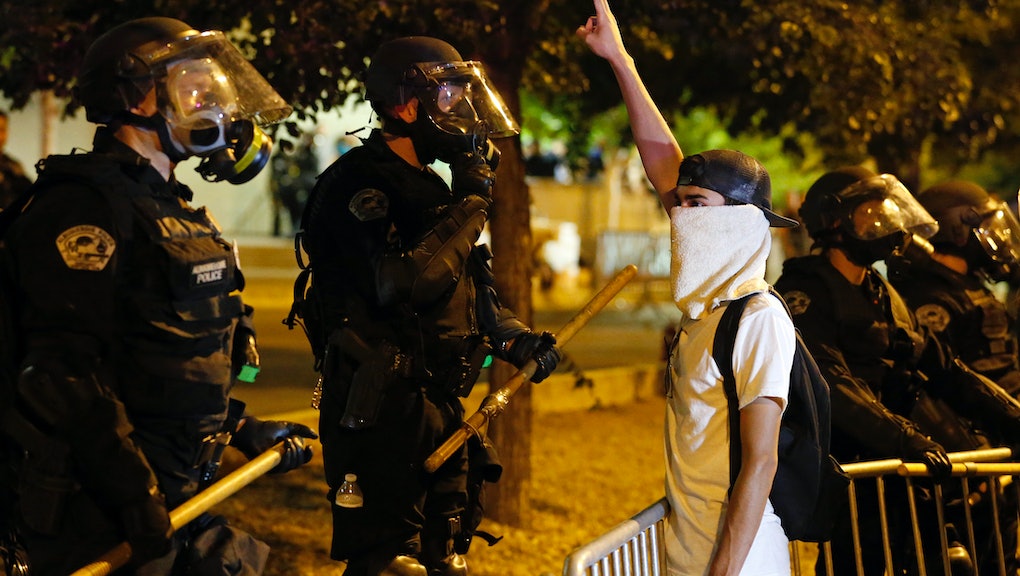 In a scene reminiscent of the chaos in Chicago in March, protesters and police clashed outside a Donald Trump campaign rally in Albuquerque, New Mexico, Tuesday night.

Demonstrators reportedly broke through barricades, jumped on cars and threw rocks at police, who countered with smoke grenades in an attempt to clear the anti-Trump crowds gathered outside the city's convention center.

Read more: The One Photo You Need to See From Donald Trump's Canceled Rally in Chicago

"Reports circulated that a gunshot was fired, leaving a hole in the side of the convention center. Police later said on Twitter that was untrue, and added there was possible damage from a pellet gun. A glass door at the entrance to the center appeared to be broken," the Washington Post reported.

Authorities reported at least one arrest as a result of the demonstration against Trump, whom activists assailed as a purveyor of anti-immigrant hate:

The mayhem — an apparent outgrowth of an initially peaceful protest — extended inside the Albuquerque venue as well.

"At one point, a female protester was physically dragged from the stands by security. Other protesters scuffled with security as they resisted removal from the convention center," Fox News reported.

The presumptive GOP nominee mocked those who disrupted his event, sneering at one, "Get out. He can't get a date, so he's doing this instead" and taunting another, "Go home to mommy," KOB TV reported.

Demonstrators weren't the only ones dishing out heated rhetoric: The bombastic billionaire used his stage time in Albuquerque to rail against Democratic presidential frontrunner Hillary Clinton as "a lowlife" and the news media as "dishonest slime," CNBC reported.

Trump rallies have a long history of violence.

The Manhattan mogul cancelled a major March event at the University of Illinois at Chicago after brawls broke out between Trump supporters and foes.

A black demonstrator got sucker-punched by a Trump fan at an event that same month in Fayetteville, North Carolina.

And bedlam broke out at a Trump event in Orange County, California, in April, where police struggled to control a protest that resulted in damaged cars, blocked roads and more than a dozen arrests.

As Trump moved closer to securing the 1,237 delegates he needs for the GOP nomination with a win in the Washington state primary on Tuesday night, California authorities were girding Wednesday for possible disturbances ahead of a scheduled campaign rally in Anaheim.