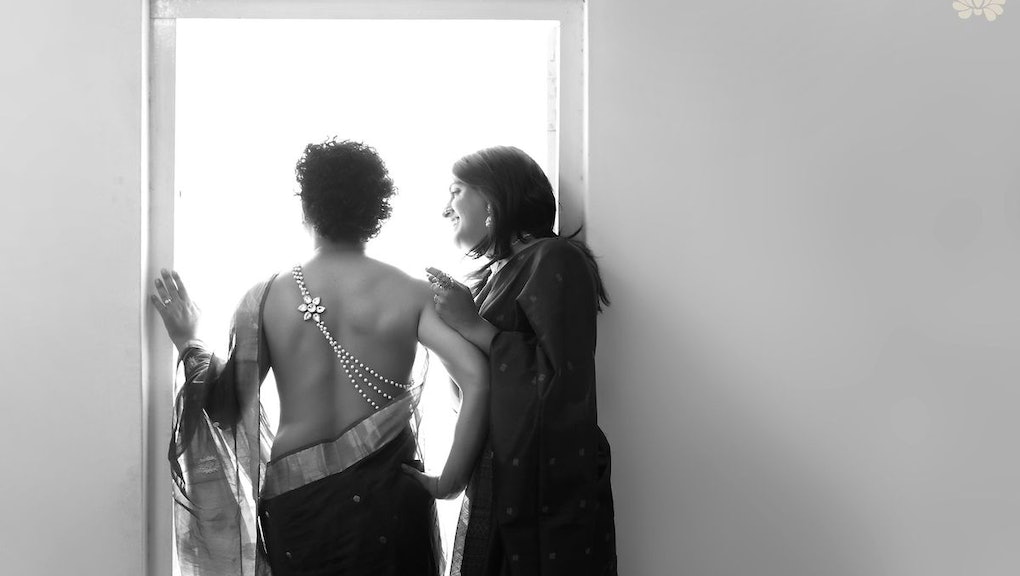 Sharmila Nair, a fashion designer from the southern Indian state of Kerala, created a sari collection in tribute to the LGBTQ community. She named it "Mazhavil" — Malayalam for "rainbow."

After learning that the Kerala government had issued a progressive policy providing citizens the option to legally identify as "transgender" and implementing full constitutional rights for all trans people, Nair wanted to go beyond just naming the collection "Mazhavil," according to Mashable. She asked two Indian transgender women — 29-year-olds Gowri Savithri and Maya Menon — to be featured in a photo spread for the collection.

The viral photo shoot breaks stereotypes by celebrating the beauty of these models. But, more importantly, it sends a powerful message about inclusivity, acceptance and love of transgender people in a world that isn't always so welcoming to them.

Savithri and Menon were reluctant to participate at first.

Nair contacted the local LGBTQ rights organization Queerala, which helped her connect with the models. At first, Savithri and Menon were worried about participating; as trans women, they face discrimination regularly, and the visibility could negatively impact the fashion designer's brand.

That didn't matter to Nair. There was a higher purpose for the photo shoot.

"It takes time to break stereotypes and for people to accept," Nair told Mashable. "They are very creative, and really put their heart and soul into the shoot."

Despite the new policy's goal of alleviating economic hardship and discrimination, transgender people continue to face barriers in Kerala. For example, when looking for a venue for this photo shoot, Nair was turned away several times for simply having trans women as models. She settled on a church in the city of Kochi for the shoot. Gowri, currently dealing with financial hardship, is struggling to get a job because of social stigma against trans people.