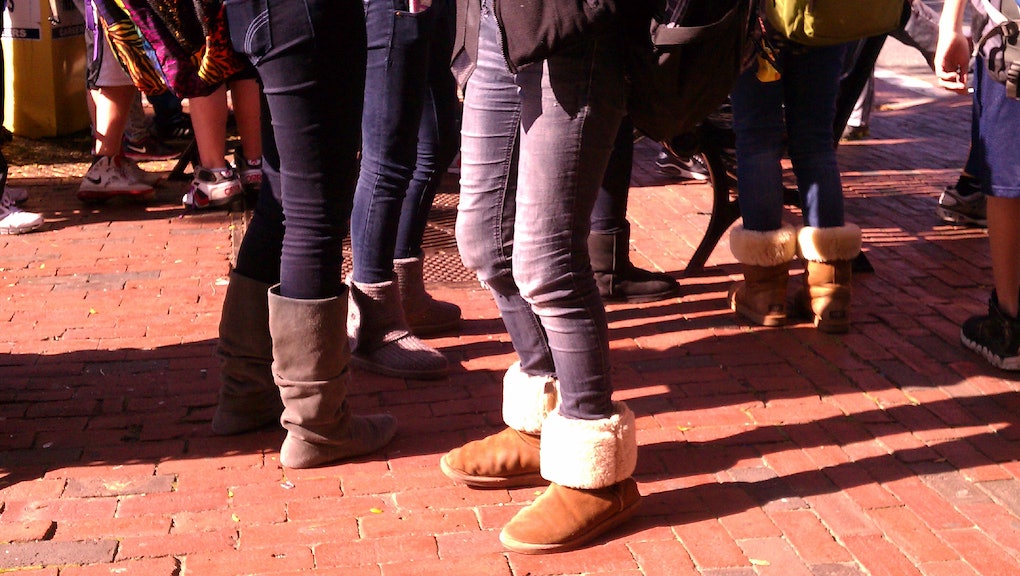 The Tar Heel state just continues to raise eyebrows. In an attempt at tackling the bullying problem in its schools, North Carolina's New Hanover County recently proposed a ban on skinny jeans and similarly form-fitting bottoms with the stated intention of protecting "bigger girls" from ridicule.

But as many have been quick to point out, forcing the victims to change their behavior in order to avoid harassment doesn't seem the best way to solve the problem.

"From my perspective, telling people that they can't wear something because they are being bullied takes away the choice from them," Chris Furner, the parent of a first grade student at an elementary school that would be affected by the ban, told the Associated Press.

The proposed dress code revision would prohibit leggings and any "excessively tight-fitting pants" along with skinny jeans, WECT reported. Students would only be permitted to wear these garments when paired with tops that "cover the posterior in its entirety."

Skirts, skorts and presumably shorts would be held to the same standards. So, basically, it's sensible slacks and baggy Bermudas for all.

As one might expect, students are not thrilled at the prospect. But fashion hurdles aside, the proposal of the policy has, in turn, highlighted more pressing problems — overpopulation and a shortage of supplies, for example — within the school system that might be more deserving of the administration's attention. Or so suggests feedback offered on Twitter:

There's also a concern that the measure doesn't weigh equally on boys and girls. As tends to be the case with dress code restrictions, New Hanover County Schools' new mandate appears to prioritize boys' educational experience over girls' — men can't learn with women there, distracting them with skinny-jean-clad butts. One Twitter user challenged the school, "How about instead of trying to control women you teach men that women are not sexual objects and looking at them as such [is] wrong."

Fear of bullying, it would seem, isn't the real issue. Lisa Estep, who sits on the New Hanover school board, keyed a lengthy response to the proposal on Facebook: "You can't legislate kindness," she wrote. "But you can teach it. You can't legislate compassion. But you can live it. As a system, we should, as best we can, foster an environment where all students feel included and valued."

Singling out certain students as the reason why certain garments can no longer be allowed doesn't foster inclusivity. It's alienating and it tells "bigger girls" that they're the thing that needs fixing — not the bullying behavior of their peers.