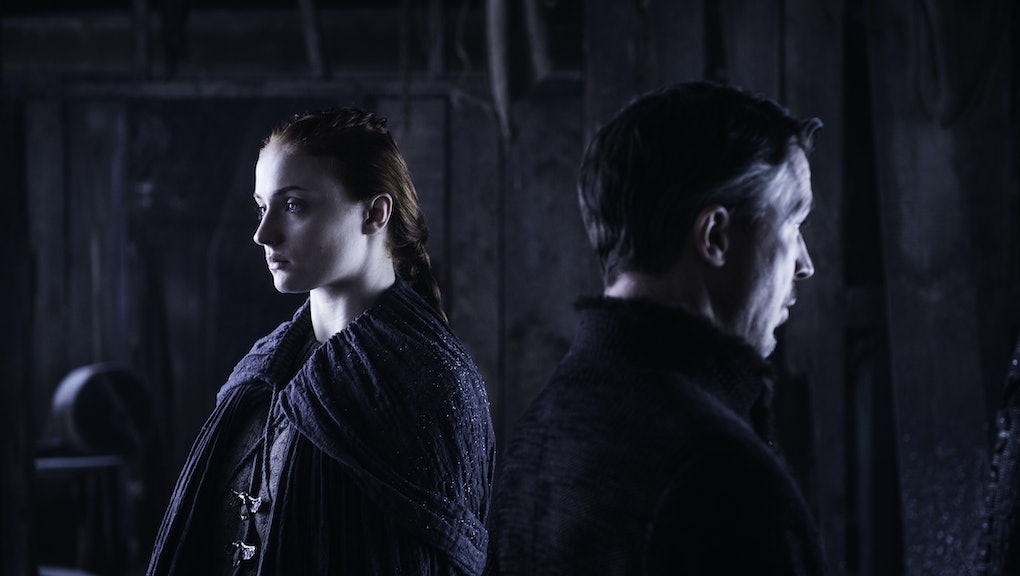 There's no shortage of cruelty on Game of Thrones — but Sansa Stark's grim, tear-soaked journey may very well be more harrowing than any other character's. She witnessed her father's execution at the hands of Joffrey, her vile fiancé and then-King of the Realm — only to endure endless physical and mental abuse at his behest. Most recently, she escaped the clutches of the series' most sadistic character, Ramsay Bolton, though not before he'd raped and tortured her repeatedly.

But making her way out of Winterfell and joining forces with Jon Snow may not spell the end of her anguish. During Sunday's episode, "The Door," Sansa talked to Littlefinger about what she endured at Winterfell, and one redditor noticed that the language she used could indicate that she's pregnant.

The user, snowyday, notes that some other pieces of evidence that could point toward Sansa being pregnant were included in the episode — namely the new dress she made for herself (which could be used to hide a baby bump) and the fact that she had problems stomaching the food and ale at the Night's Watch. While any one of these alone is hardly a smoking gun, altogether, they're enough for fans on Twitter to reach the same conclusion.

While a potential pregnancy would seem to only spell more misery for the character, he or she could also end up being an unexpected trump card for Sansa Stark.

The reason Ramsay married Sansa in the first place was to consolidate the North, and produce an heir with a Stark — it's the same reason Sansa mentioned to Littlefinger as to why Ramsey wouldn't harm her face ("the face of Ned Stark's daughter"), and why Myranda said last season that they wouldn't harm her genitalia, but would torture the rest of her.

Ramsay's sadistic tendencies aside — most recently, he fed his infant brother and step-mother to hounds— he does understand the importance of an heir for himself; he's not going to be around forever (and will die soon, fans hope). As long as Sansa's away from his grasp, she controls the future of House Bolton.

For once — thank the Old Gods and the New — Sansa could have the upper hand in one of the many games in Game of Thrones.

Read more: This 'Game of Thrones' Fan Theory About Bran Stark Could Be a Series Game Changer