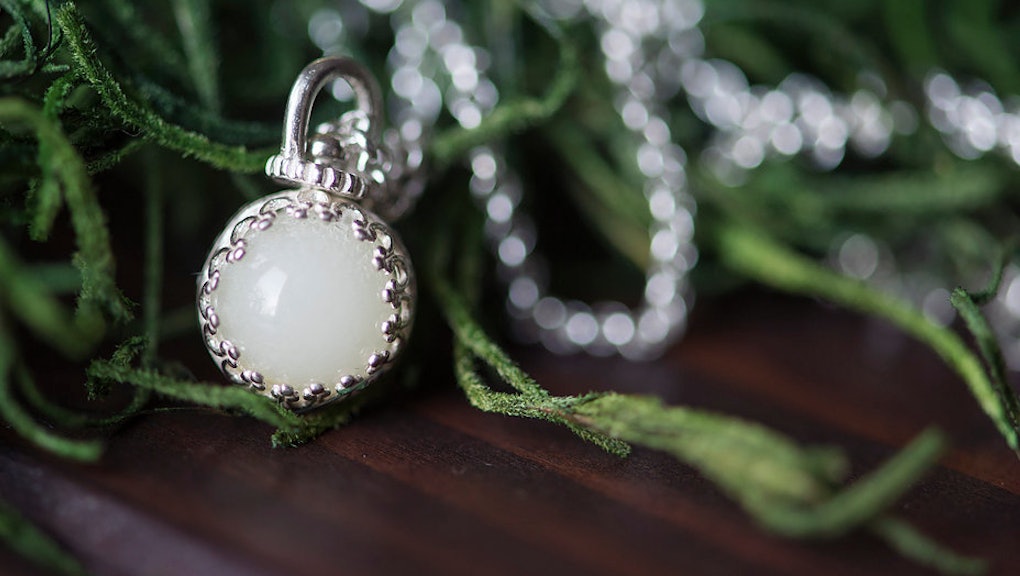 Last year, Ann Marie Sharoupim gave her friend a present that she could never forget.

With the birth of her second child, Gabriella, in 2015 Sharoupim quickly realized that breast feeding wasn't going to be as easy as it was with her first. Because her own breast milk supply was low and Gabriella wasn't responding well to formula, she decided to find a breast milk donor who could provide for her daughter sans struggle. And that woman, according to Sharoupim, was able to change everything. For that, she thought, she deserved the perfect gift.

"I wanted to make something for her because I know how much time it takes to wait and pump," Sharoupim, who's 28 and lives in Rutherford, N.J., said in a phone interview. "It's so, so hard. So I made a necklace with a bit of her milk with her son's initials in them — and then I wanted to spread that same joy."

Sharoupim is a pharmacist, which allowed her the resources to experiment for months with preservatives and resins that could safely hold and keep the breast milk from spoiling. Once her recipe was perfected, she crafted the tiny silver necklace herself.

"I've done a lot of chemistry and I thought, how cool would it be to preserve this gift for her," she said. "I tried experimenting to see which item lasted and, after continuously doing that for 6 months, there were two formulas that actually lasted. It's like a mommy medal."

The donor was touched and thrilled, and by January, Sharoupim had created the company Mammas Liquid Love. Currently on her website, there are tiny silver rings with jewels that can be filled with milk from a mother or surrogate or donor, as well as pendants and earrings and bracelets, all of which she can make after people send her 1.5 ounces of breast milk and pay between $50 and $100.

Although she admits that plenty of people could find the practice gross, she thinks mothers in particular understand just how meaningful breast milk can be to a person.

"Without having gone through what I went through, I would have never wanted to wear a breast milk necklace," she said. "Before children, I would have thought this was gross, but going through having to nourish them ... it's a gift for myself."

According to the New York Post, which first unearthed Sharoupim's business, she is one of a dozen or so women around the world who are creating breast milk jewelry. But it's not as simple as filling a little bead with breast milk, and that's likely the reason why Sharoupim, with her background and knowledge in pharmaceuticals, has created steady business. So far, she's fashioned 100 pieces, which each take two weeks to make.

"It's for moms to realize the strength they have," she said. "That they were able to nourish their children through sleepless night and excruciating nights. It symbolizes a woman's strength."

The jewelry has also come to symbolize, for Sharoupim, society's changing views on breastfeeding, with people taking to social media to help remove the stigma.

"I see all these debates and it's really enlightening to see that men are trying to see a woman's perspective, that it's not right to sexualize or shame women doing what's natural for them," she said.

In just the past few months, Mic has reported on breastfeeding sit-ins in both Australia and Hong Kong, a breastfeeding cafe opening up in the U.K. and several breastfeeding photoshoots that have caused a stir on the internet. Even Kim Kardashian West has spoken out in support of it. Clearly, the world is catching on to the fact that breastfeeding is totally natural. After all, it's a woman's right to choose how she chooses to feed her child, whether that be breastfeeding or formula.

Sharoupim hopes to continue the business at least partially for the next few years, mostly because she knows exactly how much some women want the pieces she makes.

"I get thank you letters every time I send back a batch of orders," she said. "Most of them have the same story of women who were told they would never produce milk and, because of their determination, they did. Some of them have said that it's a beautiful reminder of what they were able to accomplish. When people look at it, they don't realize it's breast milk jewelry."

As she put it: "It's a reminder that I'm a badass breastfeeding mom."