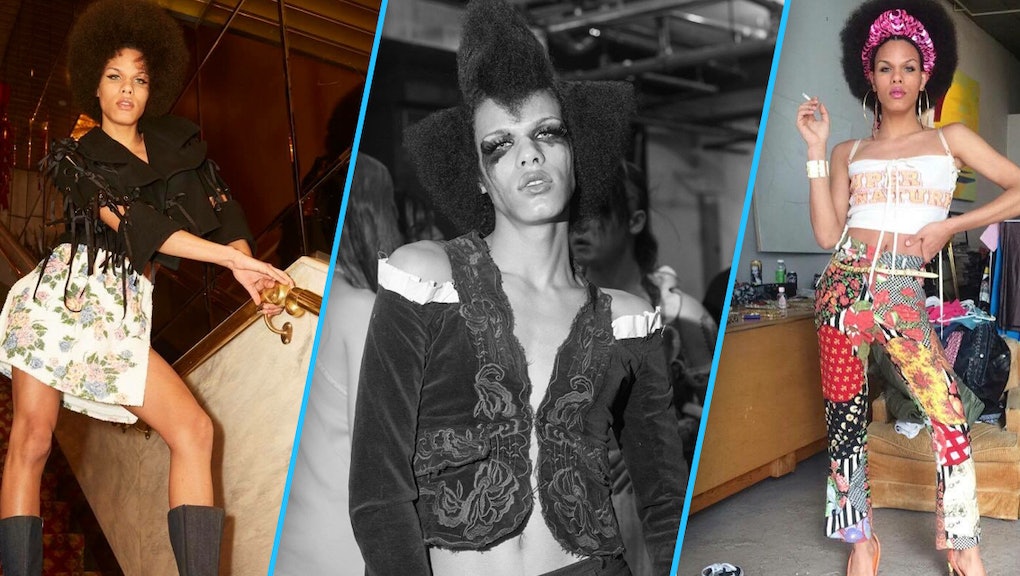 In 2016, our bodies are inherently political — whether it's transgender bathroom politics, birth control and abortion resources for women or Black Lives Matter. And the more identities those bodies exist at the intersection of, the more political those bodies become. Maya Monès, a rising model and trans woman of color, knows that simply by existing, by being seen, she is helping to advance an agenda of inclusivity.

"If mainstream culture teaches us anything, it's that our bodies are not our own. They exist to be consumed, and they exist to be compared to other bodies," said a recent Mic article on the dangers of "passing" culture for trans people.  No industry offers more bodies up on the altar of capitalism the way fashion does. By elevating and marketing to only certain bodies — mainly white, fit, cisgender ones — fashion teaches our culture what kinds of bodies and identities are valued.

As a trans woman of color, Monès' presence in the industry is doubly radical. "Fashion is changing and people are starting to speak up, but there are still a lot of people that see the consumer of fashion as a white person, so they only use white models," Monès says. "It's frustrating because models don't, let's say, walk as well as you or someone you know, but they're getting runway work because of their skin color." But Monès is looking at the bigger picture, and believes the industry is changing, little by little. "Women of color in the fashion industry, our existence alone is breaking down so many barriers and pushing so many lines."

In her short career, Monès has already had some exciting highlights. Last fall, she walked for Gypsy Sport, 2015 winner of the of CFDA/Vogue Fashion Fund. Monès also appeared in a spread in CR Fashion alongside five other trans models, several of them also women of color. The gig came from someone within her personal network via an Instagram message.

According to Monès, most of the work she books comes to her through random messages and people within her community, people who know her. As a trans woman, she says, the traditional model of castings doesn't work for her. "It's mostly a scam," she laughs. "Most of the time [casting directors] have people in mind, or they just want white people."

And despite the fact that trans bodies and narratives are finding their way more and more into the mainstream, fashion still hasn't quite figured out how to deal with trans people. The aesthetics of transness and androgyny are happily co-opted for runways and magazine spreads, but trans models themselves are still seen as a fad — or not at all. While there are trans models in positions of visibility in fashion — Hari Nef, Andreja Peji?, Laith Ashley — they are often either anomalies or fully immersed into cisnormative standards of beauty.

"When Fashion Week comes around you deal with a lot of douchey casting people that really don't respect trans people and see trans as a trend," Monès explains. "You walk into a casting and they're kind of giving you an eye already without even meeting you. That's frustrating to just have to take and not go off on them, because you want the gig," she laughs.

And in fashion, like in politics, the higher you go structurally, the more of a mess things are. "The bigger the opportunity, those people are the most clueless," she said. "They're the most removed from reality."

But Monès reiterates that things are changing, sometimes simply because of the persistence of models like her and her contemporaries, especially those who own their identities as trans models and refuse to blend into cis culture.

passing culture can be extremely dangerous, Monès cautions. "As a means of survival, a lot of trans femmes don't/can't disclose their transness. If they're assumed to be trans, they can be in immediate danger, especially if they're persons of color. It can also be detrimental to the progressiveness of our community because there's a large number of girls who feel like they can't stand up & be proud of their trans-ness..and that's what we all dream about-seeing all of us being proud no matter what."

Read more: This Transgender Barbershop Is Redefining What a Salon Can Be

While Monès is critical of cisnormative beauty standards, she is currently fundraising for FFS (facial feminization surgery), not to "pass", but to overcome dysphoria. "I've never really felt good in my body, or I've never really recognized myself or identified with myself when I was male presenting, and this goes back to when I was little. Looking in the mirror and never feeling like it was right. Now it's becoming more of a reality."

More than anything else, Monès hopes surgery will help her find herself. "I want to recognize myself finally. That's pretty much it, looking in the mirror and being like, 'Oh yeah, that's what I see in my head.'"

While FFS might help Monès' fashion career, opening doors that would otherwise be shut by closed-minded casting directors, she says she'll never stop identifying as a trans model first and foremost. "That's who I am," she insists. And while fashion still has much to learn when it comes to trans models, Monès is in it for the long haul, not just to get the gigs, but to politicize her body and the fashion world at large. The next few months will see Monès continuing her takeover of New York nightlife and snatching up gigs at every chance she gets.

"Having a mindset of 'and I am telling you I'm not going,'" she laughs, "and 'I'm here, I'm not moving, bitch' — is a huge political and radical statement."