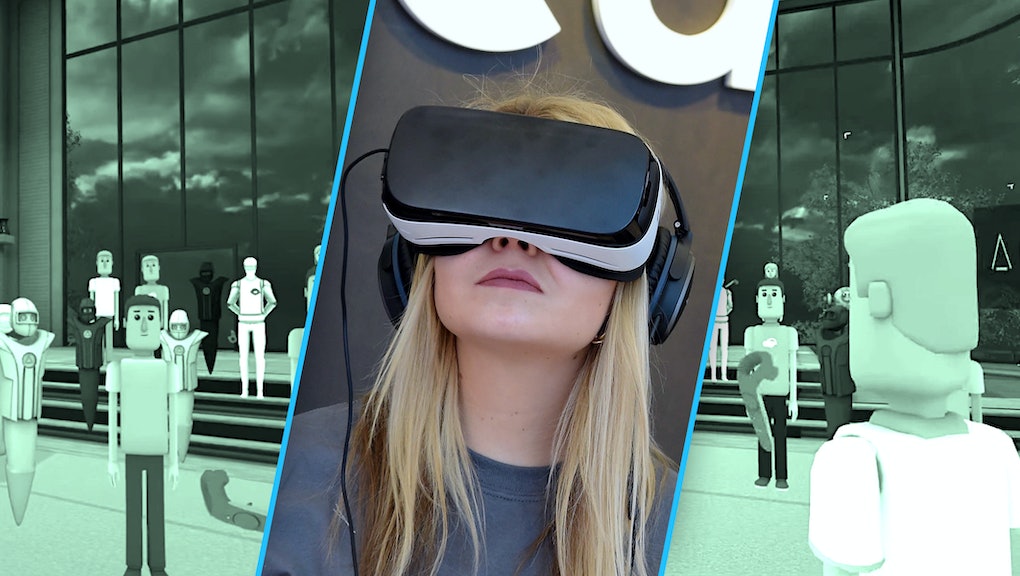 Virtual Reality Is Full of Assholes Who Sexually Harass Me. Here's Why I Keep Going Back

Within two minutes of walking into the welcome room in Altspace, a leading social VR app, I was given my first unsolicited "virtual reality kiss." Shortly after, my skinny brown-haired avatar was swarmed by male users rubbing on me and asking if I was as skinny in real life or just a fatty behind an avatar. I felt ripped from the virtual world and transported back to middle school.

A moderator stepped in not long after to control the situation. He could tell I was uncomfortable and asked everyone to give me some space. "Sorry, it's my first time here," I felt compelled to say. I turned to one of the male avatars clustered by me. "So, there aren't many women here," I said. "We had one earlier today," he responded.

A few days later, Mic tech editor Alexis Kleinman went into an Altspace room using a female avatar and was also immediately harassed. Other users got in her face and tried to "kiss" her. The other male users jokingly yelled, "I have a boyfriend!" and "Harassment!" as she asked them to move away from her. One user did mention he had spoken to a female journalist named Taylor about harassment in the space. (That was me.)

The concept of social VR spaces is great, but the vibe is not. Despite the rocky start, I gave Altspace a couple more tries over the weekend and I have to say I really love it, or at least the idea of it. When the moderators are around, conversations are pleasant. I talked to people from around the world and even met a couple other women.

Unfortunately, these interactions were sandwiched in between men making jokes about gang rape and pretending to give each other blow jobs.

When I stepped into the Altspace last Saturday evening, a group of men with HTC Vives were discussing the best way to give each other the finger, given the fact that they didn't have hands.

"We need a universal sign we can do with our controllers, since we don't have fingers," one said. "It has to be something we all agree upon so we know what it means."

I stood there unsure how to engage. I finally began to laugh nervously. One man standing off to the side turned to me and said, "I think this proves how mature everyone with a Vive is." It was the first time in Altspace that I felt camaraderie.

Later on that session I began chatting with a couple other women in the room. "How do you like it here?" I asked a friendly British woman. "It's great. I'm in here way too much," she said. "You just have to avoid the creeps and if anyone annoys you just block them, or get someone like James. James is like my big brother here."

James is a friendly Irish man who explained to me that he likes to look out for others, especially women on the platform, and hates when "a few" bad actors ruin the experience. "Let me know if anyone is bothering you," he said. I felt like I had found the beginning of a crew.

Altspace is working on anti-harassment tools. The app has tried to make its platform more welcoming to first time users, especially women. It added an easy blocking tool that renders your avatar invisible to offending users. Harassment, cyberbullying and lewd and unwanted advances all violate Altspace's community guidelines and, if reported, can swiftly get a user suspended or terminated.

But right now it feels like Altspace's problems stem as much from the user base as from the app's feature set.

"My first experience in Altspace was some idiot poking his Vive controller into every Avatar's mouth while repeating the mantra 'In your mouth' for an hour," one user recently wrote on Reddit.

VR is in its tween stage, and many users still act like they're in middle school. Though several analysts agree that VR technology has the potential to go mainstream in the next few years, for now it's still a niche product that has attracted a niche community — largely made up of tech and gaming enthusiasts.

The user base might have to change. For Altspace and other social VR apps to take off, a broader variety of people will have to use them. Lewd conversations aside, most of the discussions in Altspace felt like inside banter between developers: How to hack your avatar to change its color or make it run fast was a big topic one night.

In the future, I imagine I'll be able to chat with my real-life friends about my pop culture interests within Altspace. The platform does allow for friends to share experiences or hang out in private rooms, but right now none of my girlfriends have headsets.

Altspace also holds public events that have gotten a lot of attention. Musician and artist Reggie Watts will be putting on a live concert in Altspace tonight, and the platform regularly hosts comedy nights. Though I have yet to attend one myself, I've heard that event experiences on Altspace are a lot of fun. They're more tightly controlled than the open rooms and disruptive users are quickly booted.

I think Altspace has tremendous potential, provided it can build the right community and facilitate more meaningful connections. VR has been derided as the ultimate solitary experience, but despite the crass welcome and middle school humor, Altspace proves that VR has the ability to be a powerful connector of people. Mark Zuckerberg has repeatedly claimed that virtual reality could become "the most social platform ever." I think he's right. It just has to grow up.