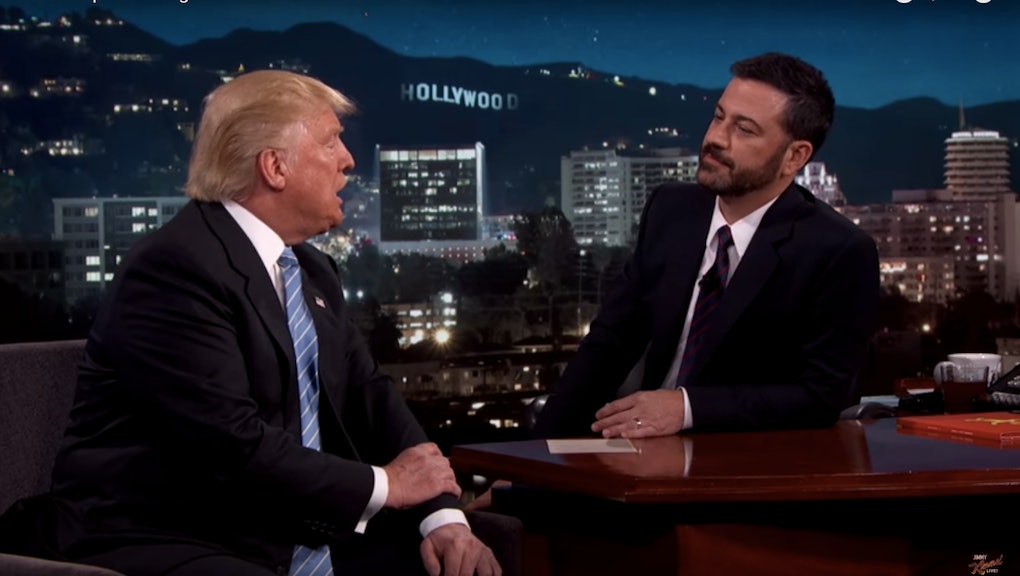 Jimmy Kimmel Calls Donald Trump Out For Being "Full of Shit"

Presumptive Republican nominee Donald Trump stopped by Jimmy Kimmel Live! on Wednesday, where he riffed on the state of the race, Democratic candidates Bernie Sanders and Hillary Clinton, transgender bathrooms and whether he's ever been to a psychiatrist.

Kimmel started on a tough note, demanding Trump clarify past statements he's made in support of Clinton — his likely Democratic opponent who he now regularly refers to as "Crooked Hillary."

After Trump delivered his usual soliloquy about how when he was a businessman, he said nice things about everybody, Kimmel shot back.

"So you were full of shit?" said the host.

Trump again denied allegations that he impersonated his own spokesman in early 1990s interviews, though tellingly did reveal that in his real estate career, he often used "aliases."

"Many people in the real estate business do that." he said, suggesting that it was necessary in order avoid being overcharged for land purchases. "You have to, frankly, otherwise they find out it's you and they charge you more money." Though he continued to deny impersonating his spokesman, he did admit that one of the aliases he used was "Baron," the same name as his youngest son and his spokesman at the time — John Barron.

Trump also lamented the tone of the Democratic contest and agreed to Kimmel's bombshell suggestion that he debate Sanders for charity. It was an offer the Vermont Democratic socialist seemed to readily accept.

The interview closed with Kimmel essentially mocking Trump, reading from a mock children's book he wrote about the candidate called Winners Still Aren't Losers, a Dr. Seuss-inspired work that Trump seemingly enjoyed (it was a sequel to a mock book Kimmel read in December called Winners Aren't Losers.