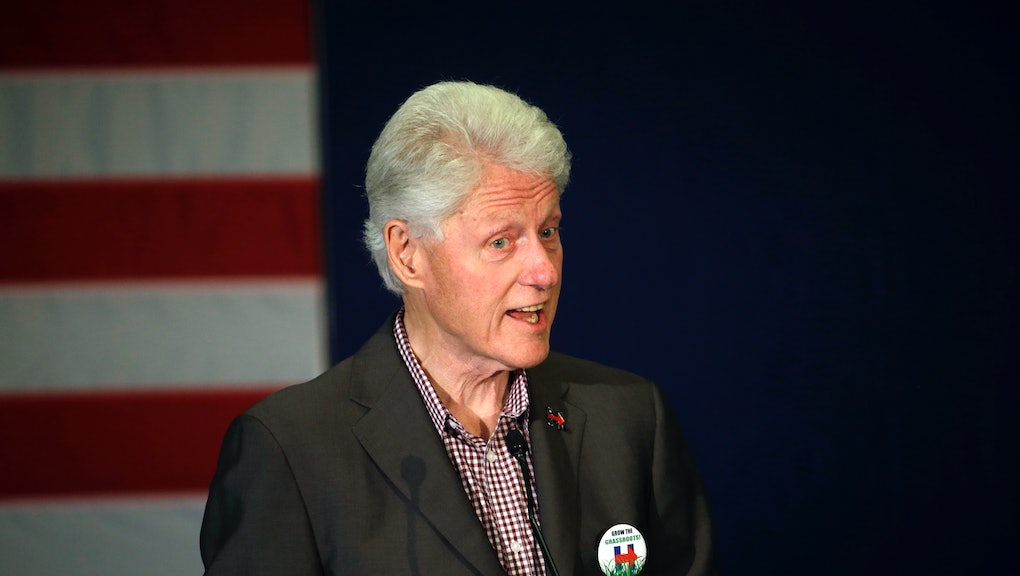 Bill Clinton is a double-edged sword as a campaign surrogate.

On the one hand, he and his presidency are viewed so positively that his efforts on behalf of candidates often provide them with a positive boost. On the other hand, he has a way of drawing attention to himself — especially when defending of his own legacy — in a manner that can jeopardize the mission of helping the candidate he's rallying for.

His spontaneous 30-minute debate Wednesday with a 24-year-old Bernie Sanders supporter at a restaurant in New Mexico probably falls into the second bucket.

Read more: Why Bill Clinton Tripped Up Hillary in the Worst Way Possible

BuzzFeed reported that the spirited exchange began when the recent New School graduate seemed to decline a handshake from Clinton, who was floating around the restaurant to whip up excitement for his wife's presidential campaign ahead of New Mexico's June 7 primary. The man, Josh Brody, told Clinton he supported Sanders over Clinton for the nomination, and he plans on supporting Green Party candidate Jill Stein later, presumably after Clinton clinches the nomination. He assailed the former president for his record on free trade, his dismantlement of the welfare system and deregulating the financial sector. And Clinton went head to head with him on point after point.

The conversation covered a wide range of issues, but the most revealing part of the exchange was when they locked horns over Clinton's overall political philosophy and theory of change. BuzzFeed wrote:

"Seems like your narrative," Brody responded, his voice louder than Clinton's, "is that you did the best job that you could have possibly done from the most progressive standpoint that you possibly could have had."

Why it matters: Brody raised a number of noteworthy points. Clinton famously shifted the Democratic Party's ideological center to the right in an era during which Ronald Reagan's ethos of small government and pride in the free market was a dominant force, and Clinton's style of governance was focused on downplaying ideology, instead portraying policy challenges as technical problems in need of technical solutions. Hillary Clinton and Barack Obama are part of that tradition, while Sanders offers a break from it in his support of social rights like free health care, a robust welfare state and his skepticism that the free market will invariably mete out just outcomes.

Clinton said at a later point that politics was about making the most of a situation with constraints. "You have a limited number of choices, and you do what you can to help the largest number of people," he said. "It is very hard. ... If the best thing to do is just say no and lob bombs, you don't get anything done."

That didn't please Brody, who likened Clinton's case to conservative British Prime Minister Margaret Thatcher's slogan, "There is no alternative."

Regardless of whether you agree with Brody or Clinton's attitudes on what shape the Democratic Party should take, Brody's discontent — common among young voters, who overwhelmingly favor Sanders — is a symbol of the challenges that Hillary Clinton will face if she wins the nomination. She has plenty of strengths as a presidential candidate, but the Democratic Party is beginning to shift away from the technocratic ideology that she and her husband helped popularize in the 1990s. Telling liberals that politics is about hard choices may not resonate with this ascendant segment of the electorate.