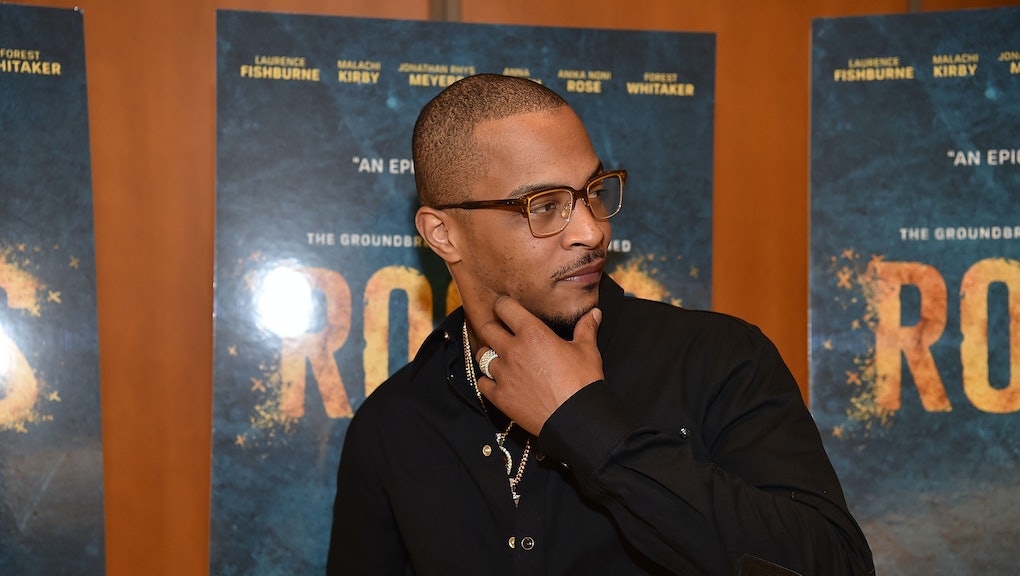 After shots were fired at New York City's Irving Plaza before rapper T.I. took the stage on Wednesday night, some news outlets chose to cover the event by recounting the rapper's own history with guns and the criminal justice system.

Though T.I. had not yet taken the stage at the venue, nor was he involved with the night's proceedings, both the New York Times and the New York Daily News dedicated several paragraphs to the rapper's criminal record.

The New York Daily News called T.I. "no stranger to gunplay." Meanwhile, the New York Times mentioned his 2009 arrest for weapons possession, as well as his probation violation and subsequent return to prison.

In 2009, T.I. pleaded guilty to three federal weapons charges stemming from a 2007 sting operation in which he was caught obtaining three machine guns and two silencers that had been bought for him. He pleaded guilty and was sentenced to one year and one day in prison.

"The crazy world of these so-called rap artists who are basically thugs that basically celebrate violence they did all their lives, and unfortunately that violence often times manifests itself during their performances, and that's exactly what happened last evening," Bratton said on WCBS 880, BuzzFeed reports.

Even though data shows that is not the case.

Data from the Rap Research Lab concluded in 2014 that no correlation existed between violence in music and real-life violent crimes.

"Many rappers grew up amid violence, police harassment, poverty, drugs and promiscuity," social work professor Yan Dominic Searcy wrote in 2008 in the Chicago Tribune. "Rappers will tell you they rap about what they know. If the community wants to change rap lyrics, the community must change reality."

While some outlets suggest a correlation between rap music and violence, other genres evade that description in media, despite significant evidence to the contrary. In 2014, a string of violence and mass arrests plagued the country music scene.

In 2014 an 18-year-old man was accused of raping a 17-year-old girl at a Massachusetts Keith Urban concert. The same year, there were several fights and arrests at a Luke Bryan concert in Pittsburgh. In Pittsburgh, a Kenny Chesney concert ended with over 70 people arrested, about 150 people injured and 45 people hospitalized in 2013.

But, when the Washington Post covered country music violence, it wrote, "it's just not that simple to point fingers at content."

"It's not the music that creates the problem," country music historian Don Cusic told the Washington Post. "It might be the soundtrack while the problem is happening, but really, it's young people who tend to get a little wild and crazy."

Where media gives country music and its fans a pass for violence, a rapper who wasn't even involved can't leave his past behind him.