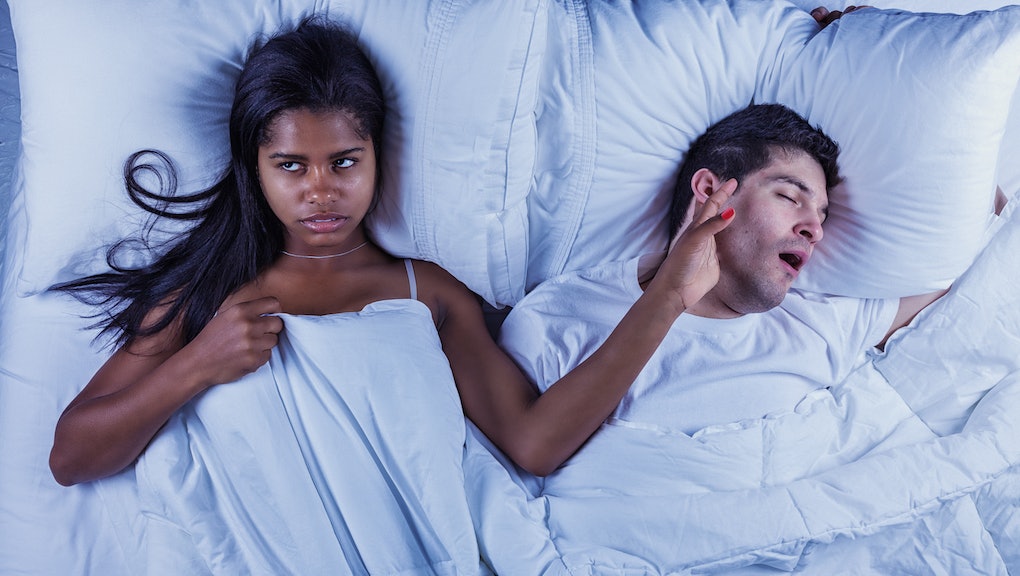 What Do You Do When Your Partner Is Good in Bed but Bad at Sleep?

What do you do when you and your partner are compatible in every way except for sharing a bed? We've collected results from an informal online survey to identify the most common cases of incompatibility and sought expert advice on the best solutions to put these sleep conflicts to rest.

Ron is a restless sleeper. His partner, Gina, was already a light sleeper before they started sharing a bed. In their five years together, Gina has resorted to building a fortress of pillows to insulate herself from Ron's nighttime antics. Sound familiar?

According to the Better Sleep Council, nearly nine out of 10 American adults — 85% — have trouble sleeping at night. And if your significant other is part of that restless majority, odds are you're in the same bed.

The cuddler's conundrum: "I don't like over cuddling," a 22-year-old anonymous female said. She says getting a good night's sleep is difficult when she's "being held too tightly, and not being able to move and breathe easily"

"I have back issues so I'm not good at cuddling by default," Brian, 23, said. "I basically need to spread out and be left alone, even though I know that's not exactly intimate."

Pro-sleep tip: Like so many other situations in life, the best solution comes from Friends. Unless you and your partner can't agree to set a "snuggle time" before separating for "sleepy time," use Ross' "hug and roll" method to cuddle before slipping away to sleep comfortably for the rest of the night.

Tossers and turners: "I have trouble sleeping in general, but trying to get a good night's sleep with my boyfriend is nearly impossible," Jackie, 24, said. "I am often tossing and turning just on my own, and the struggle is even more intense when I have another person to deal with. My boyfriend tells me I end up taking over the whole bed, so I feel like I'm even more restricted since I don't want to move around and disturb his sleep. Then I try and be so careful that I barely sleep at all. We just mutually fail at literally sleeping together."

Pro-sleep tip: Author and sleep expert Janet Kennedy advises to switch to a foam mattress, since "the lack of springs cuts down on excessive bounce and motion," so it's less likely that you'll wake up your partner if you're moving during the night. Maggie, 26, found her own solution to the problem by investing in a bigger bed. "Most of the trouble comes from not having enough room to roll over, toss and turn at my will," she said. "It is a lot easier to sleep when we are on two different sides of the bed without touching one another."

A song of ice and fire: Sam, 23, said she can't sleep well with her boyfriend because she "overheats easily." Simon, 30, prefers to sleep alone because "it's too warm to sleep together, so I don't want to be touched or cuddled."

Pro-sleep tip: Kennedy said a cool room, around 65 degrees, brings about the best quality sleep. During sleep, your body temperature decreases, reaching its lowest level around 5:00 a.m., and rises slightly as morning sets in. If the thermostat is set too high, it may interfere with sleep and cause restlessness as the night progresses. "The person who likes it warm can sleep in warmer pajamas and add an extra blanket," she said. "It's much harder for the person who needs it cool to sleep in a warm room."

The cover thief: Robert, 41, has trouble sleeping because his girlfriend "cocoons herself in bed sheets" over the course of the night, leaving him to shiver in the cold. "I literally have to unwrap her to reclaim my half of the comforter, and then she gets mad because I've woken her up."

Pro-sleep tip: The solution is so elegantly simple, it's no surprise the Scandinavians are behind it. Robert and his girlfriend each use a doona (or dyne, in Danish), a Scandinavian-style single-person comforter made especially for lone cocooning. Couples also can choose different weights, depending on each person's preferred temperature.

When primetime meets bedtime: If the sonorous voice of Stephen Colbert is your bedtime jam, while your partner needs it dark and quiet, you might be costing your bedmate an hour or two of sleep. Jennifer, 31, said, "I don't like the TV on or any light while trying to fall asleep, and [my partner] always had the TV on or is on his phone."

Pro-sleep tip. Wireless headphones are a handy solution, as is watching with subtitles and volume turned down. If light is the issue, try a sleep mask or agree on a 15 or 30-minute sleep timer that automatically shuts off the TV, allowing the watcher to be lulled to sleep without keeping the light sleeper up for too long.

The snorasaurus: It's no surprise then that a quarter of American adults in relationships report sleeping better alone than with a partner. According to an BSC study, one out of every three adults complains about their partner's snoring. Mary, 24, regularly finds herself lying awake and restless as a result of her husband's snoring. "It's hard to fall asleep because he snores, and I have insomnia," she said. "One night he was snoring so loudly that I slept on the couch."

Pro-sleep tip: If snoring is a chronic condition, Kennedy said it "could be indicative of more serious sleep problems like sleep apnea, in which case it's important to see a doctor" to assess and treat. "The snorer will benefit even more than the light sleeper," she added. If the snoring continues unabated, Kennedy recommended "using a white noise machine or using earplugs" to tune it out.

This article was originally published on May 26, 2016