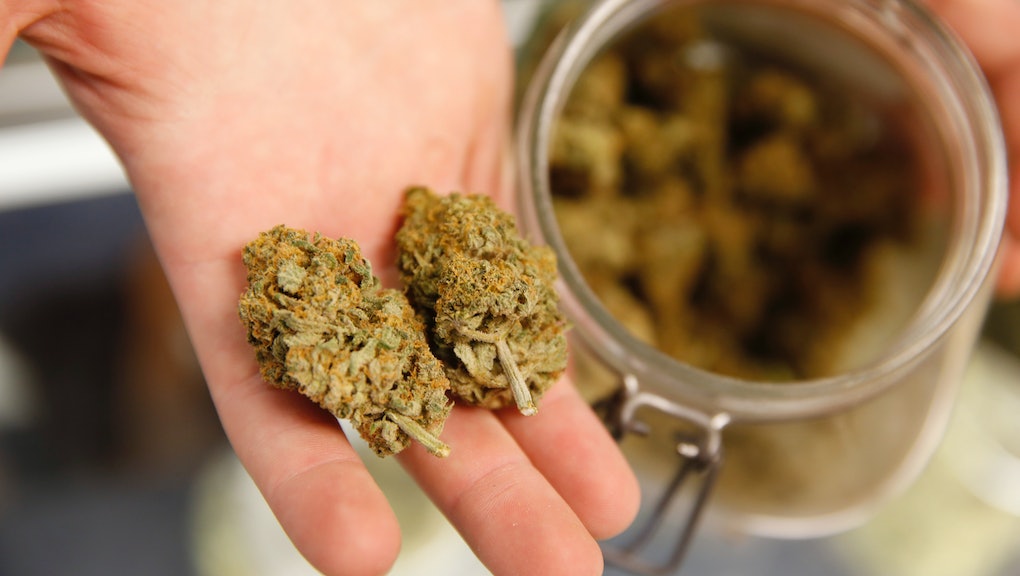 Here's How Weed Can Change Your Favorite Workout

Some people drink overpriced kale juice before hitting the gym. A growing body of athletes is fueling up on a different green treat: weed.

Coming soon to San Francisco is a gym that'll let clients consume marijuana while working out, according to Tech Insider. The gym, Power Plant Fitness, will reportedly allow edibles and vaping on-site and plans to add an "outdoor smoking deck" in the future.

The gym sees cannabis as "a tool for focus and recovery," according to Tech Insider, which spoke to founder Jim McAlpine via email:

"New members will take a 'cannabis performance assessment' under the supervision of staff to determine the 'most optimal ways to consume.' Some might find a bite out a pot brownie gives them the push they need to complete a circuit training workout, while others find it knocks them on the floor."

"It won't be a place to get high and just screw around," McAlpine said in a blog post. "We are focused on the athletic side, not the cannabis side."

So! Can weed actually help you work out?

Plenty of athletes claim weed ups their game. One of them is Seibo Shen, a jiujitsu enthusiast and founder of the vaping company VapeXhale. The 39-year-old recently starting vaping before entering jiujitsu matches, and says it's helped him achieve the perfect mental state for fighting.

"When I consume cannabis, I'm just in a state of — I don't want to call it 'oneness' — but I'm very calm," Shen said Thursday in a phone interview. "I just go in super loose."

In intense, competitive sports like jiujitsu, mixed martial arts or football, so much of athletes' success depends on "getting in the zone," Shen said — and marijuana stands to help them get there.

"When you can get your mind out of the way and let your body do what it's supposed to do based on muscle memory and repetition, you have athletes performing at a higher level," he said.

There's also Ross Rebagliati, the Canadian snowboarder who tested positive for THC after winning a gold medal at the 1998 Olympic Games. Rebagliati — who ultimately got to keep his medal — has said cannabis helps him train.

Cannabidiol, a nonpsychoactive compound in cannabis, "is excellent for athletes who are recovering, in particular because it's such a big anti-inflammatory," Rebagliati said, according to Vocativ.

"It's excellent for those guys and girls who are out there training hard every day and needing to recover muscles that would naturally be inflamed or after any injuries they may incur on a regular basis," he said. "Pain through inflammation is a big deal."

Of all the ways people incorporate cannabis into their fitness routines, "the most popular way right now is on the recovery side," Shen said.

Does science back any of it up? Because the Drug Enforcement Agency still classifies weed as a Schedule 1 drug, it's hard for researchers to run studies on it, according to Business Insider.

Past studies have suggested weed could have a negative impact on fitness — but they're not the most compelling, thorough or up to date.

A 1975 study involving just eight people — all of whom had asthma — found a 25% "decrease in power output among study subjects after smoking marijuana," Business Insider reported. A 1977 study — this one involving just six people — found "some decreased motor control" among "experienced pot smokers when they got high, though they didn't show significant changes in reaction time."

Yes, there are risks. Smoking marijuana can irritate your lungs and make you cough, according to the National Institute on Drug Abuse — which is not ideal if you're heading outside for a 5-mile run. It also raises your heart rate for "up to three hours after smoking," which "may increase the chance of heart attack."

Learning how to incorporate weed into a workout takes time, Shen cautioned.

"Using cannabis in fighting is like surfing for the first time," he said. "It just feels really unsteady. You're off balance, you fall a lot — it's not a really good time."

But with regular use, Shen has been able to use it to his advantage. "Once you understand how to surf, there's this oneness, this connectedness, this effortless movement you have with the board along with the water," he said.