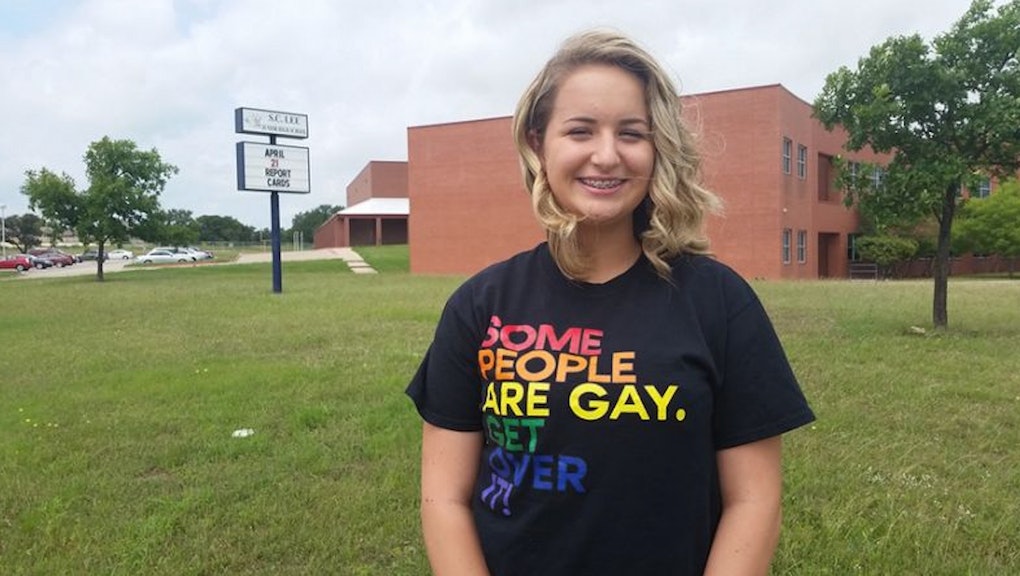 On Monday, just 10 minutes into her school day, Ali Chaney, an eighth grader at SC Lee Junior High School in Copperas Cove, Texas, was told that her T-shirt violated the school dress code and ordered to change.

The offending message on the shirt in question? "Some people are gay. Get over it!"

Chaney's mom, Cassie Watson, took up the case via Facebook, who wrote that the incident was "a heartbreaking eye-opener for my daughter," who, she said was "essentially bullied" by the school administration.

After the confrontation, Chaney called her mom because she felt discriminated against for the shirt and for being gay. "It's just a shirt, and it's not hurting anybody," Chaney told KCEN.

In a statement, district spokeswoman Wendy Sledd called the shirt "disruptive to the learning environment based on reactions by other students" and said Chaney's peers were distracted by the shirt.

Chaney argued that a student was allowed to wear a shirt that compared President Barack Obama to an Islamic communist, but the school said that someone wearing a shirt of Miley Cyrus twerking had to change.

"If anyone knows my Ali they know she has so much spirit," Watson wrote. "She has been taught love and acceptance and not hate and bigotry!"