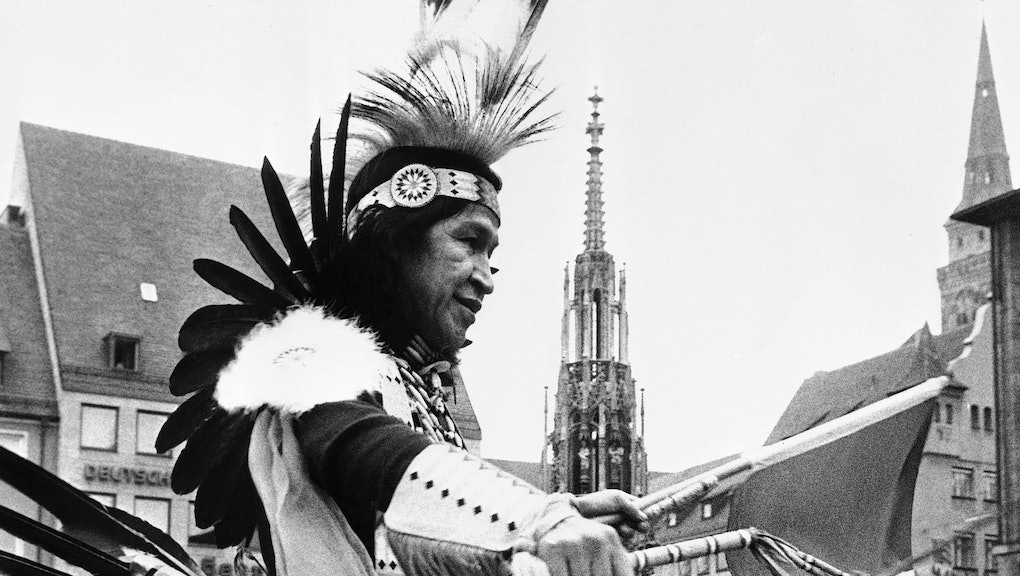 11 Things We Need to Stop Saying About Native Americans

Native Americans have put up with a lot of crap for centuries. But perhaps one thing that could immediately change is the language and rhetoric when referring to America's indigenous people.

Just look at how Donald Trump referred to Sen. Elizabeth Warren this week: Trump called her "Pocahontas" with a "big mouth" in retaliation to her takedown of the presumptive Republican nominee.

Examples of these sorts of negative stereotypes are everywhere. For years, activists have fought to get the Washington Redskins and Kansas City Chiefs to change their names because sports team names shouldn't inaccurately portray indigenous people in this country.

The Netflix original film The Ridiculous Six — directed by the notoriously racially offensive Adam Sandler — featured a sexualized Native American woman named "No Bra" peeing by a teepee while stereotypically lighting up a peace pipe. (She was originally called "Sits On Face." SMH.)

Even children's beloved literature classics reinforce these terrible narratives. For example, "Peter Pan," known for the enchanting magic and thrilling adventure, depicts Native Americans as "Piccaninny Indians" who fight ruthlessly against Peter Pan and his white entourage. In high schools across the nation, students are engaging in racist chants, and mascots don tailfeathers and headdresses.

In an effort to eradicate the use of racial slurs and anti-Native American narratives, here are a few common offensive remarks people should avoid saying full stop.

Replace "Indian" with literally any race, and it's clear just how insensitive and problematic it is to ask the question.

The term "Indian giver" depicts Native Americans as cheap, fraudulent and stingy — when in reality they have a more generous perspective on the concept of gifts. For many Native Americans, gift giving is based on understanding the needs and value of an individual rather than monetary value. Gift giving is based on trust and survival, not sacrifice or leverage. Simply put, generosity is a way of life.

3. "I love Jacob Black from Twilight."

This should be pretty obvious since the almost always shirtless Taylor Lautner — distantly related to the Ottawa and Powtawatomi tribes — isn't representative of approximately 5.4 million Native Americans and Alaskan Indians. Saying this is like telling an Irish person you love Liam Neeson. It's absurd.

When these barriers exist for Native Americans, using your teeny-tiny bit of indigenous ancestry for money isn't cool. It's exploitation.

Fetishizing Native Americans, like many often do when idolizing Jacob Black or Pocahontas, treats the indigenous group as a monolith and makes judgments based on their physical appearance. By casting Native Americans as "exotic," we're stripping away the complexities of being indigenous.

Peyote is sacred to many in the Huichol tribe. It's often referred to as a "gift from the gods to the people to enlighten their lives and bring them into the mystical realm," according to the Huichol Center. Peyote, a cactus plant with psychedelic capabilities, serves as a symbol for success, good health and fortune.

Asking for peyote just to spice up your weekend is offensive.

Indicating that Christopher Columbus "discovered" North America implies that there weren't indigenous groups already living in the region. Native Americans existed for thousands of years before Europeans began invading the region. It perpetuates a Eurocentric version of history that ignores the mass slaughter and rape of Native Americans.

After several years of activists pushing to institute "Indigenous People's Day," states like South Dakota and California, as well as cities like Seattle, Portland and Minneapolis, have celebrated Native American heritage as an alternative to Columbus Day, according to Think Progress.

8. "Why can't I wear a headdress for Halloween? It's just a costume."

Just like how the hijab, or headscarf, is a sacred symbol for women in Islam, Native American headdresses have a higher spiritual purpose than just being your unoriginal Halloween costume. The headdress is a garment that is earned by chiefs who have engaged in selfless acts of leadership.

So no, it's not just a costume.

9. "If the reservations are so bad, why don't you just move?"

Furthermore, Native Americans do not "own" their lands. The lands are still property of the federal government and Native Americans are not granted the same federal rights as other U.S. citizens. Nearly all of the economic programs must go through several federal agencies, including the Bureau of Indian Affairs, which is bogged down by decades-long delays on petitions and misallocation of Native American assets. All of this hinders economic growth and offers little potential for residents to move out of the reservations.

But reservations are more than just a piece of land; they're sacred lands where Native Americans stay connected to their ancestry, heritage and community. While some leave to pursue higher education, many often return to give back and help preserve their culture.

Powwows are more than just parties. They are social gatherings for Native Americans rooted in spiritual symbolism. It's an occasion where Native Americans come together to sing, dance, make friendship, revive old friendships and oftentimes are an act of prayer. Don't be a jerk.

To say that all those inhabiting North America are "immigrants" is erasing the identity, existence and trauma indigenous people face. Native Americans were living in the Americas long before Spanish Conquistadors and the Europeans aboard the Mayflower arrived.

Now that you have a bit of context about Native Americans, just check yourself before opening your mouth.