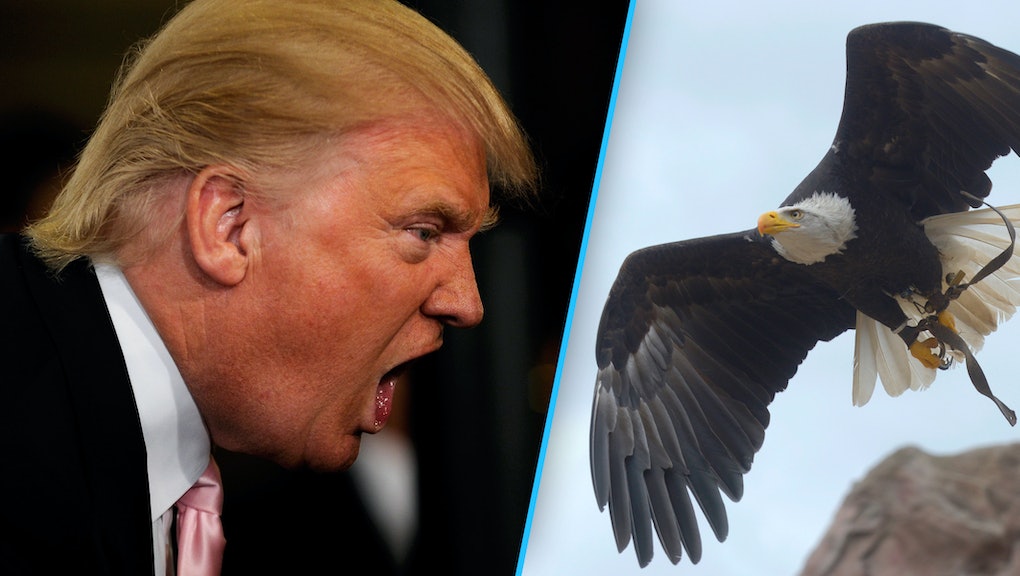 Trump told America Thursday afternoon that we need to be energy-independent, unless we want to end up "begging for oil" from the Middle East. So his proposal is to approve the Keystone Pipeline, a project President Barack Obama rejected in November and that environmentalists claim would do catastrophic damage.

Solar energy got a shoutout during the speech, though Trump said solar energy "is very expensive." But wind? We can't have wind. Wind is killing the eagles.

"If you shoot an eagle, or kill an eagle, they want to put you in jail for five years," Trump said. "And yet the windmills are killing hundreds and hundreds of eagles. One of the most beautiful, one of the most treasured birds, and they're killing them by the hundreds, and nothing happens. So wind is a problem."

Trump has one thing right: Wind turbines kill hundreds, if not thousands, of eagles in America. But ironically, wind turbines could prevent a much bigger threat to eagles: climate change.

Reports by the National Audubon Society show that 314 species, including the bald and golden eagle, are at risk of losing 50% to 100% of their range due to climate change by the end of the century. What's more, further investment into wind energy could result in more sophisticated turbines that could pose a lower threat to eagles, as well as building patterns that stay clear of nesting grounds.

It's patriotic of Trump to invoke the bald eagle — he's been seen to have a close but tumultuous relationship with those birds.

Climate change also threatens the wood duck, the oriole, the wild turkey and a dozen kinds of owls.

Never mind the fact that Trump, who in the same speech bragged about his recent endorsement from the National Rifle Association, doesn't seem bothered that guns also pose a threat to our eagles. It was only Tuesday it was reported that Americans have killed 23 bald eagles this year.