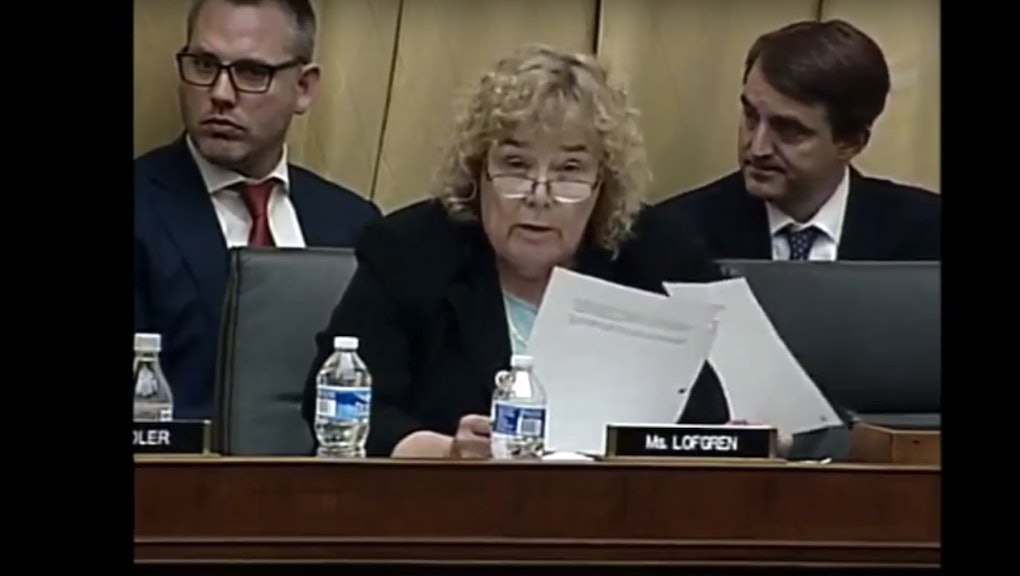 This Congresswoman Just Clapped Back at an Anti-Trans Woman

California Rep. Zoe Lofgren used her microphone to speak up for transgender people Wednesday and call out Gail Heriot, a member of the United States Commission on Civil Rights, for being an "ignorant bigot."

In prewritten testimony before the House of Representatives, Heriot — a law professor and civil rights attorney — expressed opposition to the Obama administration's directive on transgender students' use of restrooms, which urges public school districts nationwide to allow transgender students to use the bathroom that matches their gender identity. Heriot compared the discussion around trans rights to "entering an Alice in Wonderland world."

"If I believe that I am a Russian princess, that doesn't make me a Russian princess, even if my friends and acquaintances are willing to indulge my fantasy," she wrote in the testimony. "Nor am I a great horned owl just because — as I have been told — I happen to share some personality traits with those feathered creatures."

When Lofgren called Heriot out for her "rather offensive" testimony, Heriot attempted to respond. "I think you'll find that many people find it very offensive that the Department of Education ..."

Lofgren said Heriot's testimony made it clear she does not understand the struggles that transgender youth endure.

"I've got to say, I found [this testimony] rather offensive, and it says to me that the witness really doesn't know anything and probably has never met a transgender child who is going through, in almost every case, a very difficult experience finding themselves," Lofgren said.

Rep. Steve King presided over the proceedings. After Lofgren chided Heriot, King said Lofgren was "out of order" and tried to silence her.

"We allow witnesses to say offensive things, but I cannot allow that kind of bigotry to go into the record unchallenged," Lofgren said.