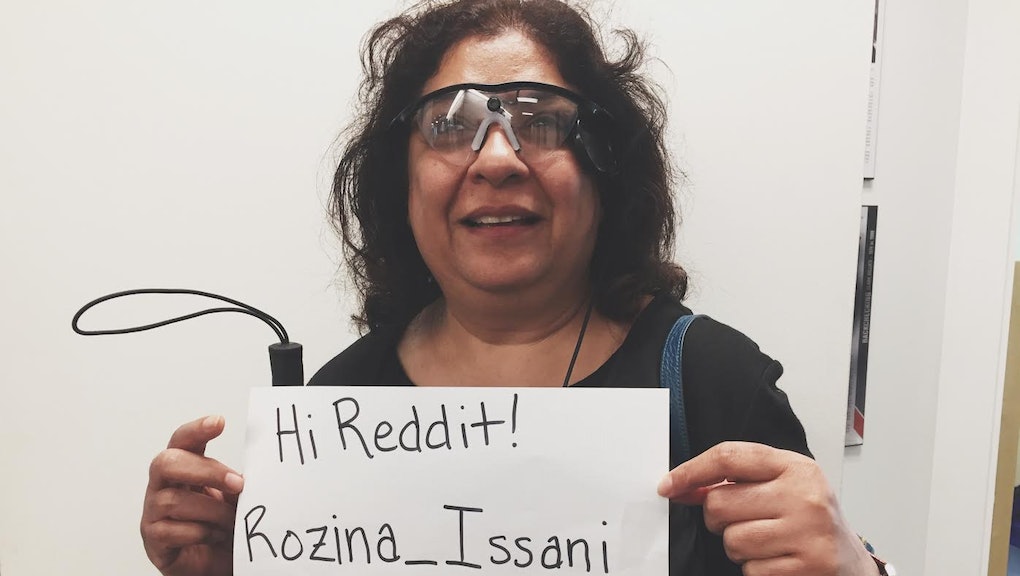 After Rozina Issani lost her vision to an inherited retinal disease called Retinitis Pigmentosa, she spent 30 years in the dark. Last year, she received an Argus II, a $100,000 retinal prosthesis that let her see the world for the first time in decades.

The technology is a little complicated — but, after all, so is sight.

Issani wears a pair of glasses rigged with a tiny video camera. The camera captures a scene — a walk down the street, a boardroom, whatever — and sends it to a small computer. The computer processes the scene, turns it into instructions and sends it back to the glasses.

Those instructions — or signals — are sent to a microchip implanted in Issani's retina. The signals are turned into pulses of electricity, which the brain learns to interpret as the scene captured by the camera.

Essentially, the Argus sends the brain a bunch of light signals, and the brain figures out what they mean and how to arrange them — sort of like it's doing a million-piece puzzle without seeing the cover of the box.

It's complicated and imperfect: The images, sort of like a cochlear implant for deaf people, don't give a crystal-clear interpretation. But Issani's bionic eye, which is actually some complicated electrical work and a pair of construction glasses with a video camera attached, has dramatically changed how she sees the world over the last 14 months.

"I see mostly in shapes and shades of light, but have some minor ability to see details," Issani wrote in a Reddit thread. "The technology hasn't enabled me to be able to read, but I have started to write using very big letters and a dark marker so I can make out the contrast between the words and the paper."

Issani was given exercises to do: match circles to circles, squares to squares, etc. She practices a couple hours a day. She goes on walks where she can see street lines and people along the way. She no longer accidentally sits on strangers' laps on the train.

What her vision looks like: "When I see using the bionic eye I actually see the world like a 'film negative,'" Issani said on Reddit. "So lighter surfaces appear dark and vice versa." It sounds sort of like a night-vision setting in '90s video games.

"With the bionic eye, I can see shapes that I guess could best be described as pixelated, or digital in nature," she said. "I can see movement on the TV now, which is an improvement over before, but overall I still cannot use TV or computers fully without accessibility software."

While the technology improves — according to Issani, Second Sight, the company that makes the Argus III, should have a color version in 2018 — Issani lives in a lo-fi first-person-adventure-game version of the world, interpreting her surroundings with the help of electronics. But, she says, it's a huge improvement over living for years with so sight.

"After 30 years with no vision at all, I could actually see the lights in my office and the shape of people around me," she said. "I felt like an excited child who had just discovered something totally new."