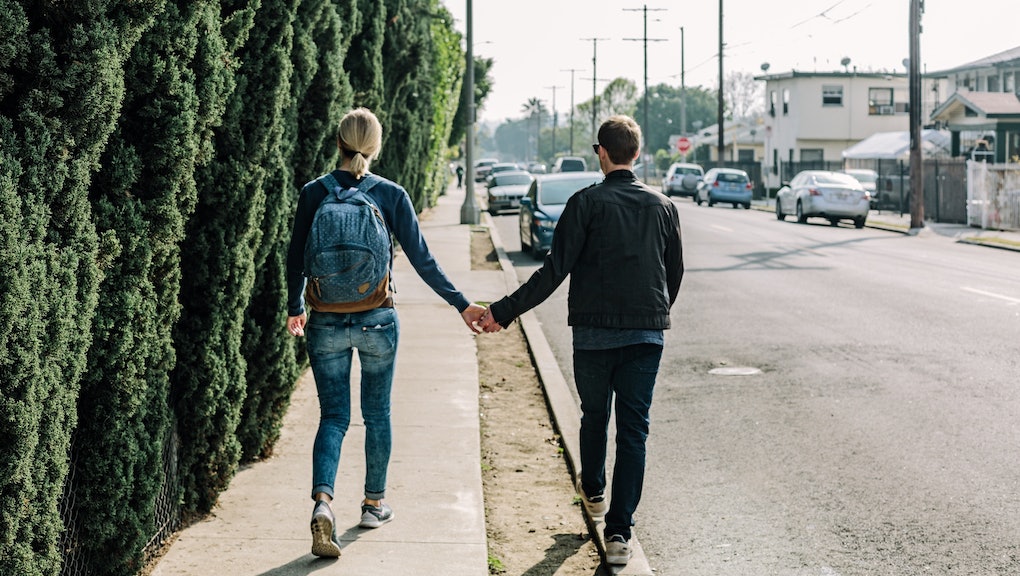 When Jackie* was a few months into dating her now ex-boyfriend, he decided to go off his antidepressants cold turkey. "He was much more adventurous and less dark, self-hating when he was on them," Jackie* said in a phone interview. "I was like, 'What is going on with you?'"

When Jackie asked her ex why he couldn't just go back on his meds, he said it was because he couldn't afford his refills. "I offered to pay, but he was stubborn," she said. "He would just talk about how worthless he was and slept all day. There was suicidal thoughts and crying." The pair split shortly afterward.

When most people think of withdrawal, they think of heroin addicts, or other hardcore drug users, curled up in bed and thrashing wildly. But withdrawal can also be hell for those taking prescription medications like antidepressants — as well as for their romantic partners.

While the partner going through withdrawal experiences such symptoms as anxiety, irritability, and mood swings as part of the side effect profile for anti-anxiety meds, anti-depressants, and ADHD medications, the partners of those on meds can also feel the tremors of withdrawal, which can have a detrimental effect on any relationship.

"[When I quit my antidepressant] I told my husband I might be extra sensitive or not feel well. I wanted him to be aware of this. I was super tired the first few days, then I overreacted to some stressful events a few days after that. When my husband said I was overreacting, I reminded him about my meds and he was more understanding," Amanda said in an email about her antidepressant withdrawal experience.

For many, these medications can be life saving — and as a result, they can also help save relationships. For a suicidal patient or someone dealing with the black hole of major depressive disorder, starting a course of SSRIs (selective serotonin reuptake inhibitor) like Lexapro or Zoloft, can provide a springboard to return to life among the living. However, many psych meds, particularly benzodiazepines, are only intended as short-term solutions for ailments like insomnia or the occasional panic attack.

If a patient wishes to discontinue medication, it's usually for reasons like, "It's not working, you want to try something else, it's causing negative side effects, [or] you're not sure you need it anymore, and you want to see how you feel off it," Stephen Snyder MD, who specializes in working with couples, wrote Mic in an email.

Depending on the medication, withdrawal can be brutal. Benzos, such Xanax, Ativan, and Klonopin, cause some of the most notoriously bad withdrawal side effects. "It feels good to take [Klonopin], but I try to stay away as much as I can because the benzo withdrawal symptom Wikipedia page is one of the scariest Wikipedia pages in the canon," says Parker*, who was prescribed the medication for anxiety, and has also been prescribed ADHD drugs such as Adderall and Vyvanse.

Parker discontinued his Adderall at his former wife's request, because she thought it made him anxious and angry. Although Adderall had been making his work life much easier, Parker said he agreed to stop taking the meds — a decision that came with its own heap of relationship issues.

"I was slightly less prone to fits of anger, but my depression at being bad at my job made up for [the anger], and manifested itself as anger, too," Parker said. He ultimately decided to go back on Vyvanse before they split up.

In light of the potential complications caused by withdrawal, Snyder advised those taking prescription medications to "taper [their use] slowly, under supervision. Then if any symptoms emerge, we have to figure out together whether these are due to withdrawal or not. Sometimes symptoms can be due to the underlying condition — for example, anxiety."

As for advice for the partners of those de-medicating, Snyder recommended joining them at their doctor's appointments to better understand what you're in store for.

Jennifer Leigh, who runs a community for those weaning themselves off of benzodiazepines, encourages spouses to practice, "Patience. Compassion. Honestly believe and trust that your partner is being honest about their experience, because people can't see the suffering – it's on the inside."

While Parker was going through his Adderall withdrawal, he found that honesty was what his relationship both needed and lacked. And as it turned out, his wife was simultaneously yet secretly going through an undisclosed drug withdrawal of her own. Their lack of transparency, he said, ultimately led to their split.

"For the partners: Be understanding, but demand transparency. If they can't give you that, everything will be worse," he said.

*First names have been withheld to allow subjects to speak freely on private matters.