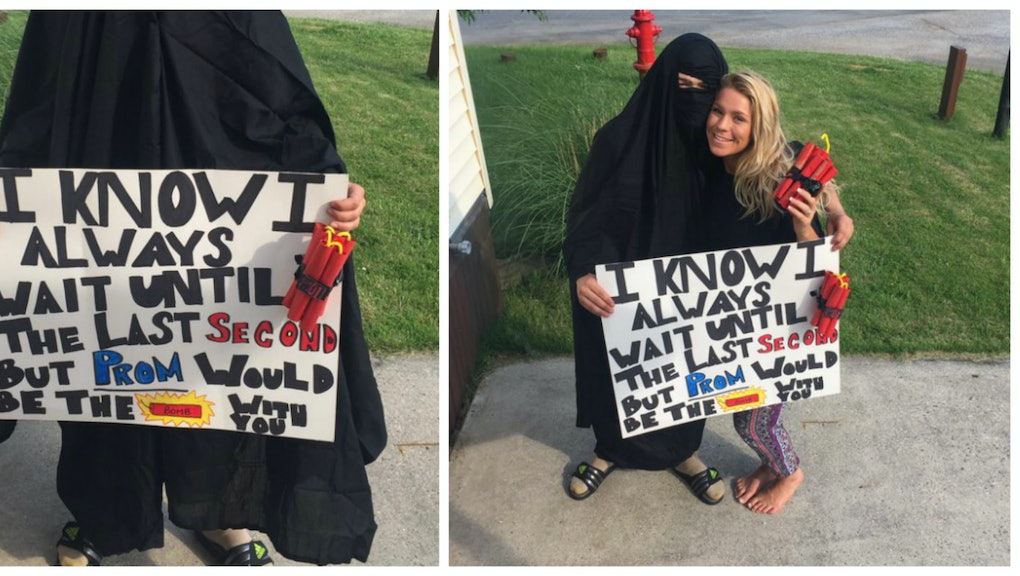 Screenshots of a now-deleted tweet from now-deleted Twitter account show a man asking Twitter user @KHugheesss, whose profile name is Kiana, to go to prom with him. One big problem: It's the most racist promposal ever.

In the photo, the man, whom @KHugheesss calls "Austin," is wearing a burqa and holding a sign that reads: "I know I always wait until the last second but prom would be the bomb with you."

Despite it being a terrible pun couched in an overly long sentence, she presumably said yes, as one of the two pictures attached to the tweet is "Kiana" joining "Austin" in a picture holding a few sticks of cartoonish TNT as if she were Daffy Duck or Wile E. Coyote.

While a deleted account is not the same thing as a guilty conscience, it certainly doesn't help her case. Once the tweet began to go viral, people lashed out at @KHugheesss, with some users threatening to get her banned from prom.

Twitter began to drag the couple for their humorless picture and, in usual Twitter style, it was pretty savage.

One Twitter user identified the handle of the male student in the picture, but his tweets are protected.

While this couple's perception of terrorism is a woman wearing a burqa, in actuality, the typical "terrorist" in America usually looks more like a white man with a gun.

Given that fact, Twitter user @tylergpocey has a much better suggestion for a promposal: