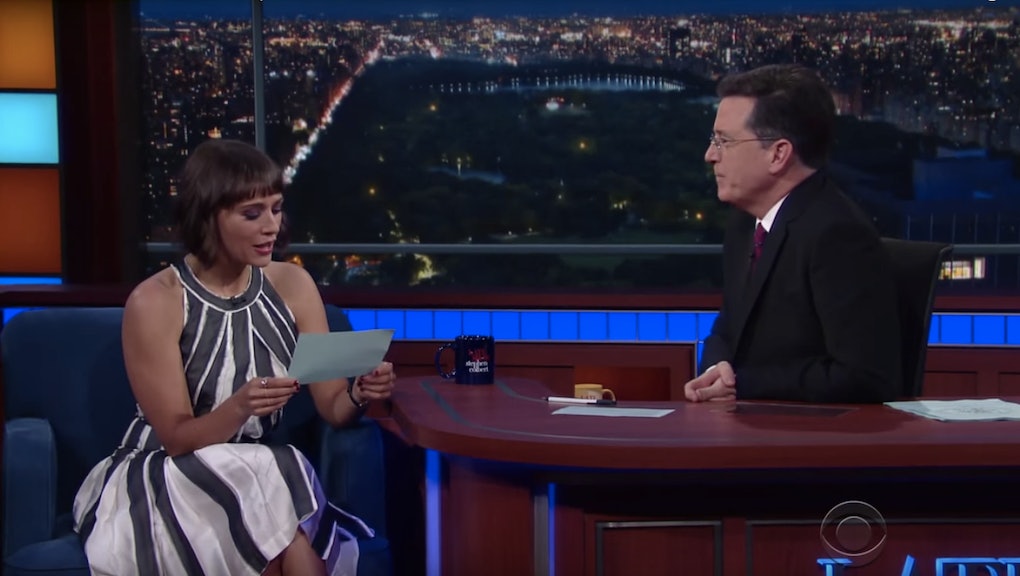 During a recent appearance on The Late Show with Stephen Colbert, actress and avowed feminist Rashida Jones played the role of teacher to Colbert's student as she attempted to show the host a bit of what going through life as a woman can feel like.

After Colbert tells her that he's been "informed" by others that he's a feminist, an identity which he accepts, Jones informs him that a good next step is to be aware of what the female experience is actually like.

To help prove her point, Jones flips the script on some of the popular questions interviewers are predisposed to asking women on the red carpet, turning them on the male host instead.

"Who are you wearing?" she asks, to which a flustered Colbert, checking the inside of his suit jacket, responds "there's no label."

Though the interview stays lighthearted throughout, some of the questions Jones poses, like "How do you do it all? Women want to know," serve to highlight the more pernicious ways society views the roles of men and women.

"As a man in comedy, how have you been able to get your voice heard?" she asks, to which Colbert responds with a sheepish laugh after a long pause, "They gave me a late night show."

After concluding her line of questioning, Jones informs Colbert that he's answered everything correctly — "Unlike a woman. There's no right answer for a woman."

Watch the full exchange below, starting at the 4:19 mark.