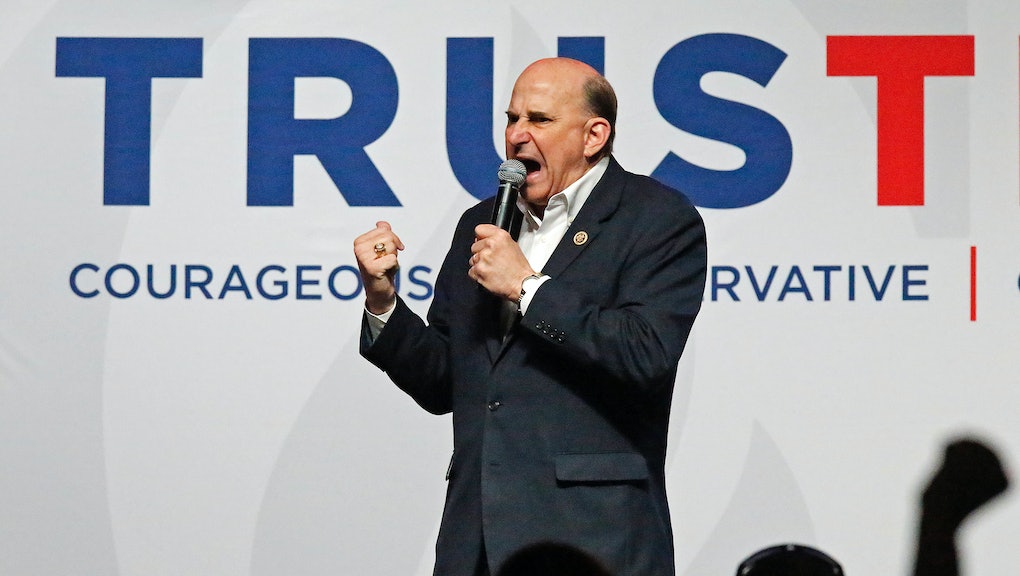 On Thursday, Gohmert took to the House floor to let his colleagues know he had seen the Matt Damon movie The Martian, in which Damon plays a lone astronaut stranded on an abandoned base on the planet Mars, Right Wing Watch's Brian Tashman reported. In the event of a world-ending catastrophe, Gohmert speculated, leaders must decide "whether humanity would go forward or not" by establishing an outpost on another world.

In that event, the representative argued, gay people should be left behind because they can't be relied upon to propagate the species, and that the current push toward equality and civil rights will be revealed as a dangerous mistake.

"OK, we've got a space ship that can go, as Matt Damon did in the movie, plant a colony somewhere; we can have humans survive this terrible disaster about to befall," Gohmert prompted before asking, "If you could decide what 40 people you put on the spacecraft that would save humanity, how many of those would be same-sex couples?"

He continued, "You're wanting to save humankind for posterity, basically a modern-day Noah, you have that ability to be a modern-day Noah, you can preserve life. How many same-sex couples would you take from the animal kingdom and from humans to put on a spacecraft to perpetuate humanity and the wildlife kingdom?"

If humanity is bound to be wiped out by a meteor, maybe humanity has bigger problems to worry about than the threat of gay marriage. But even if you accept Gohmert's specious argument that gay people would be unable to create future generations of humans naturally, the representative is apparently unfamiliar with current alternate forms of reproduction (such as artificial insemination), let alone those that will one day likely be invented (such as via frozen embryos à la Interstellar).

As Popular Mechanics noted in 2014, establishing a viable population on another world would take at least 10,000 to 40,000 individual human genotypes to maintain a viable enough level of genetic diversity. So those 40 people in a spaceship would need some serious science to get started, not the "natural law" cited by Gohmert.

Fortunately, it seems unlikely Gohmert will be selecting the crews for any post-apocalyptic lifeboats NASA chooses to send out. But one Twitter user did come up with a workable short-term solution to the representative's dilemma: