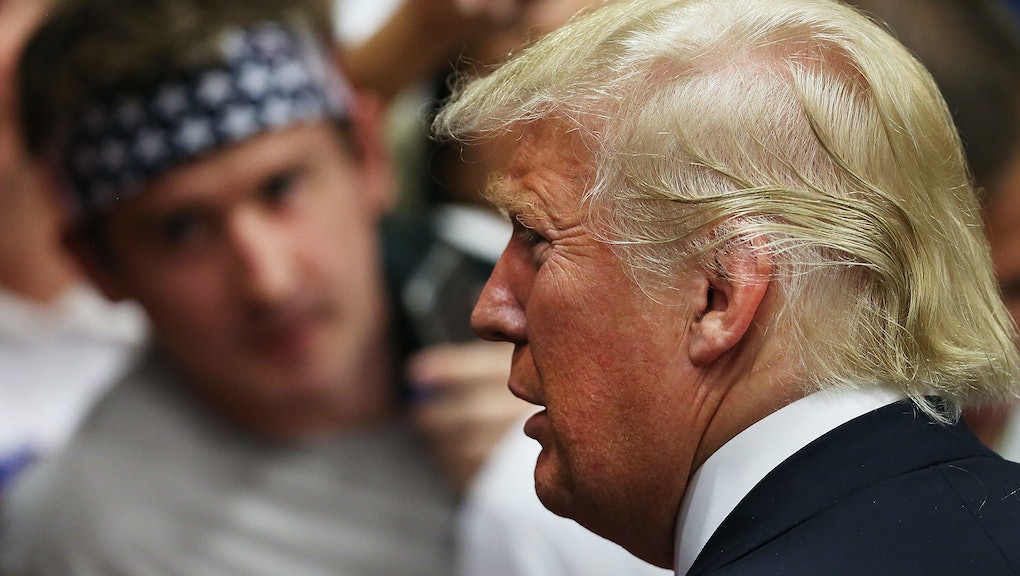 11 Horrible Things Donald Trump Has Said During his Presidential Campaign

Donald Trump is on a roll. Having more or less locked up the Republican nomination for president, he's showing few signs of slowing down or "pivoting" away from a series of ugly, bigoted statements he's made on the campaign trail, despite promises he would act more "presidential" in the general phase of the election.

The slow-motion trainwreck has included jabs at women, black people, Latinos, the disabled and even prisoners of war. Here's 11 of the candidate's worst statements, which might explain for his sky-high unfavorable ratings among U.S. voters, particular women and minorities.

According to the Washington Post, Trump's assertion is totally groundless: "The Congressional Research Service found that the vast majority of unauthorized immigrants do not fit in the category that fits Trump's description: aggravated felons, whose crimes include murder, drug trafficking or illegal trafficking of firearms."

2. Suggesting Megyn Kelly only criticized him because she was on her period

Following a tense debate in August 2015, Trump took to CNN to suggest Fox News host Kelly was tough on him as a moderator because there was "blood coming out of her whatever," a clear reference to the female menstrual cycle.

During the debate in question, Trump defended his long history of sexist remarks about women by saying he had criticized "only Rosie O'Donnell."

On Twitter, Trump also suggested Kelly was a "bimbo."

In September, Trump mocked Carly Fiorina by saying "Look at that face!" Would anyone vote for that? Can you imagine that, the face of our next president?"

"I think Donald Trump is an entertainer," Fiorina responded. "And I think I am a leader."

4. Calling for a ban on all Muslim entry to the country

In December, Trump exploited growing Islamophobia in the wake of a terror attack in Paris and a mass shooting in San Bernardino, California, both perpetrated by Muslim extremists, by calling for a "total and complete shutdown of Muslims entering the United States until our country's representatives can figure out what the hell is going on."

On Twitter, the candidate said his proposal was a "very important policy statement" about the "extraordinary influx of hatred & danger coming into our country."

In November, Trump also asserted cheering crowds of Muslims took to the streets of New Jersey to celebrate the Sept. 11, 2001 terror attacks — a claim not grounded in reality.

In July, Trump attacked McCain, who served in Vietnam as a pilot, was shot down and spent years in a Vietnamese prison camp, by saying "He's a war hero because he was captured. I like people that weren't captured. OK?"

Trump roundly earned the condemnation of other candidates, but the incident failed to slow his momentum.

6. Saying he could murder someone in public and people would still vote for him

In an address at a campaign rally in January, the candidate posited "I have the most loyal people ... I could stand in the middle of 5th Avenue and shoot somebody and I wouldn't lose voters, okay? It's incredible."

At a rally in Las Vegas in February, Trump responded to a protester at one of his events by telling the crowd, "I'd like to punch him in the face. He's smiling, having a good time." He added "in the old days," such disruptors would be "carried out on a stretcher."

As noted in a harrowing video recently released by progressive publication Mother Jones, Trump has regularly advocated for predominantly black protesters to be treated with force, and beatings and assaults have become a fixture of his rallies. The Mother Jones ad compares Trump's rhetoric to police and racist citizens' suppression of Civil Rights protesters in the 1960s.

In November 2015, Trump mocked disabled New York Times reporter Serge Kovaleski, who has a chronic condition inhibiting his arm movement, by pantomiming his disability while saying "Now the poor guy, you ought to see the guy, 'Uh I don't know what I said. I don't remember."

After the incident, Trump said he did not know Kovaleski and thus could not have been mocking his disability — an assertion challenged by the reporter, who said he was on a "first-name basis for years" with the candidate.

9. Re-tweeting a neo-Nazi who said blacks are criminals

In November 2015, Trump retweeted a white supremacist who posted an infographic with completely fictional statistics about black people and violent crime.

In a later appearance on the O'Reilly Factor, Trump justified himself, telling host Bill O'Reilly he was not "gonna check every statistic? I've got millions and millions of people" tweeting at him.

In March, Trump advocated bringing back harsher forms of torture than waterboarding, saying it was necessary to deal with "these animals over in the Middle East that chop off heads." Earlier, in December, Trump said the U.S. should bomb the families of suspected terrorists to intimidate them into submission.

"The crucial moral and ... legal requirement ... is to distinguish between combatants and civilians, and noncombatants and to attack only the combatants," Institute for Advanced Study researcher Michael Walzer told Mic, "To target the innocent is the worst crime of war."

11. Painting the entire religion of Islam as extremist

This kind of demagoguery is alarming to the many peaceful Muslims living in the U.S. A recent poll by Morning Consult commissioned by the Council on American Islamic Relations found a full 30% of Muslims consider challenging stereotypes about Islam as their top priority in 2016.