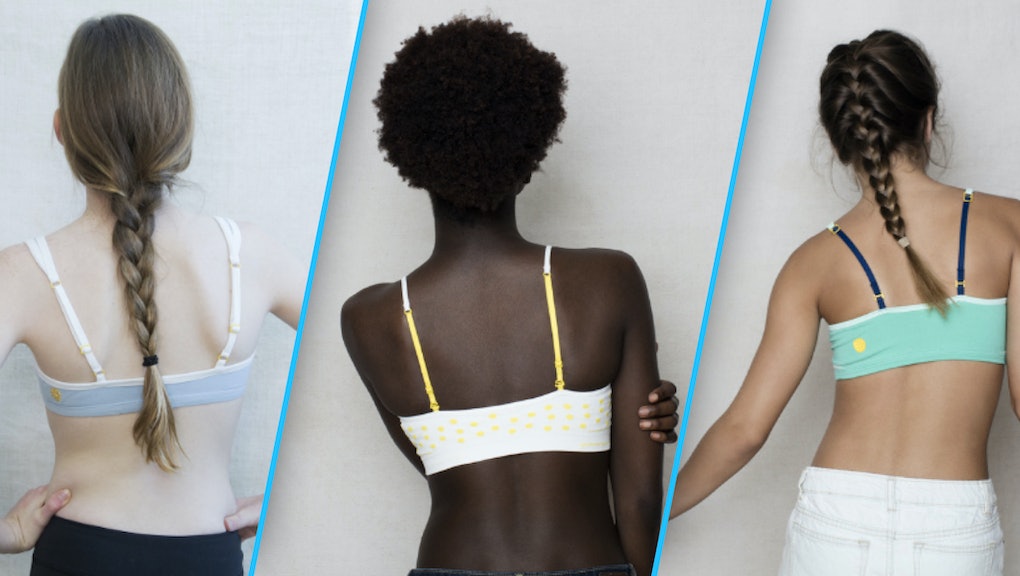 Where Is the Line Between Sexual and Functional for Preteen Bras?

Every year, millions and millions of people begin the search for their first bra. They swarm Victoria's Secret or their local department store, with or sans parents, to find the bra that fits them, both physically and personally. For some, it is liberating. For others, it is traumatic. For many, it is the first realization that they will one day (if they don't already) have breasts.

Recently the topic of preteens and the bras they may wear caught the internet's attention when the U.K. company Matalan was called out for selling a molded black plunge bra in a small size, with a tag reading "my first bra" on one of the cups, a design many thought was too provocative for a young person who is just buying their first bra.

Sarah Champion, the shadow minister for Preventing Abuse and Domestic Violence, was one of the first women to speak out on the bra via a statement on Facebook (that was eventually deleted), which was also posted on Twitter.

"The bra is black, with padding and a plunge-front, which gives the illusion of a cleavage," Champion wrote, according to HelloGiggles. "Matalan are advertising this as a 'teen' bra, but the sizes available are tiny. The bra I'm showing in the photo is meant to be a 28A, but it's not more than 23 inches. This means that the girls actually wearing the item could be younger than 8."

Champion's statement caused a bit of a firestorm on social media, with many people stepping forward to call out how inappropriate they too thought the bra was, HelloGiggles reported. To many, it was blatantly sexualizing children. In response, Matalan said they don't sell bras to "specific ages," but for people of specific sizes.

Champion said she thought the idea of a young person wearing a plunge bra (which are typically worn by people wearing V-neck T-shirts) crossed the line. The padding in the bra (which appears to be just part of a molded cup, a commonality in bras frequently worn with T-shirts) crossed the line too. For many other parents and young people, this wouldn't be an issue. According to one review of the bra: "The padding is just right for a smooth outline and hiding any embarrassment, not to make her look bigger." For Champion, though, it clearly was — so much so that she decided to go public about it on her Twitter account, which has more than 15,000 followers.

But when talking about the line between appropriate and inappropriate, specifically for preteens and teens, many questions can arise. Like, for instance, what actually is the line between functional and too sexy? Also, who's actually in control of this line? Finally, does the line need to be there at all?

Read more: We Tried the "Bra of the Future" — And the Result Was a Resounding Shrug

For Champion and fellow critics of Matalan's bra, they were in control of the line. Often it is the parent who has a say in what their child can and cannot wear, until that child proves they are either mature enough to make their own sartorial decisions or they turn 18. What that ultimately means is deciding what is and isn't appropriate is a deeply personal (and can be a private) decision for both the parent and the child. It's also a decision that can understandably weigh heavily on a parent, given that society often sexualizes very young people in situations like advertisements in magazines or fashion campaigns, which can easily be consumed by young people as well.

In that case, it's not really on a woman like Champion to announce that a bra is or isn't appropriate for someone who is younger than 8 years old. It's on whoever is thinking of buying the bra, or is debating wearing it themselves. The line between appropriate and inappropriate for young girls (and boys) is a malleable, changeable thing, relying entirely on the parents and their communication with what the child ultimately needs from their first bra.

One company that was created in response to this panic surrounding first bras is Yellowberry. Founded in 2014 by Megan Grassell, who was just 17 at the time, the company aimed to answer the question, "Is this bra appropriate for my preteen child?" with the idea for the company coming to Grassell after she saw her younger sister struggle with finding her first bra.

"We scoured the mall to find a product that she was excited about, but I ended up being completely appalled at all of the bra options that were not only available for my little sister, but also marketed to her and girls her age," Grassell wrote on the company's website. "Padding, push-up features and underwire galore... I could not believe that these were the bras that girls were supposed to wear."

As far as deciding what is appropriate for young girls, the company focuses on everything from design to marketing, making demure cotton bras and showing young models only from the back. As opposed to sites like Victoria's Secret, the bras aren't praised for being sexy or boosting up a cup size, but for being functional and comfortable.

Compared to the Matalan bra, there's no "padding" or molded cups, and none of the bras are styled into a plunge. These are the kind of bras, it seems, that Champion would be far more OK seeing marketed toward preteens.

What Yellowberry offers parents who are struggling with the idea that their child needs an actual bra is a safe space to not only ask questions, but allow their child options, which can be wildly different than options that were available, say, 20 years ago, when the parent could have been shopping for their first bra themselves.

According to Harrington, options are most important when it comes to a first bra, not toeing the line between being appropriate and "too sexy." We are, after all, talking about a child.

"We begin to ostracize young women as soon as they develop breasts," Harrington said. "This message that it's the child who has to be aware and not be too sexy is incredibly damaging. We should be thinking about what they need in a bra, not how they look to other people. There's already so much shame and so much self-blame."

"I think it's important that girls grow up and think of something that they're wearing is something that's for them," Harrington continued. "And that mindset would hopefully start early. Even if you wear a more traditional training bra, that bra's for you. The same goes for that black plunge bra, which can totally serve a purpose."

That's not to say there shouldn't be a line between appropriate and inappropriate when it comes to what a young person is wearing. However, Harrington said the line should really be more obvious, without society projecting its own sexual thoughts about this girl in a bra.

"There is a tipping point where it is too far, but that's so far in the extreme that it wouldn't require a lot of nuance and discussion," Harrington said. "Lace, polka dots, triangle bras or bralettes are fine. A bra at its core is a garment that's not about sexual titillation or arousal. It's about making the body adhere to a certain societal standard."

So yes, the line between functional and too sexual for a preteen bra exists. However, there are larger, more important factors to think about here, like buying a bra that a child can feel comfortable in and can feel good in.

After all, a bra isn't inherently about being sexier, as Harrington said, it's about feeling more comfortable in your skin.